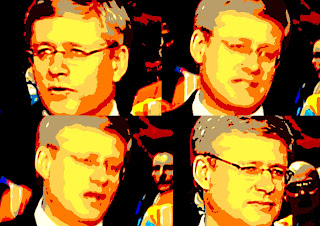 In all my years of watching Stephen Harper I have rarely seen him looking so frustrated and so humiliated.

But there he was today at a ridiculous photo-op in a Ford factory, looking like was about to implode.

For let there be no doubt, Harper would rather have swallowed a bucket of dirty oil than meet with Chief Theresa Spence. He resisted it to the end. He wanted to humiliate her sooooooo badly. Because there is nothing he hates more than powerful women.

But as I predicted last night, Great Jello Leader was finally forced to eat crow.

And this is a massive victory for the Idle No More movement and this brave Chief... 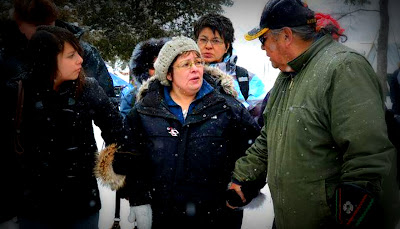 Oh sure, Great Jello was quivering so much he couldn't even bring himself to mention her name. The pathetic little man.

But nothing can change the fact that because she suffered, because she endured, when she gave Harper a 72-hour deadline he came CRAWLING.

And if he thinks he can blow off the Chiefs with another empty photo-op, he's got another thought coming.

“It will not take just one meeting to fix that relationship that has been broken or that is broken,” said Deputy Grand Chief Alvin Fiddler of the Nishnawbe Aski Nation. “We will continue to hold the prime minister’s feet to the fire to ensure that meeting, if it does happen next Friday, will begin to establish that process. But the issues that we have are many and it will take a very constructive and a very meaningful process to repair the damage to that relationships and begin to address the issues that Chief Spence and others have brought forward.”

For now that Idle No More has tasted victory, and seen what solidarity can do, if Harper doesn't deliver, the movement can only get bigger and more powerful. The drums of justice will beat louder than ever, and put a spike in the Con agenda.

And of course, if this does lead to the beginning of a new and brighter chapter in the history of this country, I will be only too happy. For as I've said before, I don't believe that ending the suffering of our beautiful First Nations people should be a partisan issue. It should be a Canadian project.

My congratulations to the heroic Chief Theresa Spence, and the awesome Idle No More movement. This is just the beginning.

Hey racists, suck it up eh? 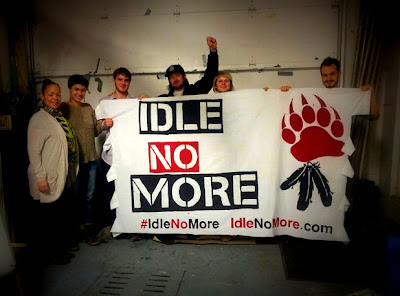 Not so fast (unless I understood all wrong).

You read French? read this : http://www.lapresse.ca/actualites/quebec-canada/politique-canadienne/201301/04/01-4608358-idle-no-more-rencontre-au-sommet.php "Nowhere does it say Spence is invited", says the reporter. "Is Spence invited to the meeting? To this, Carl Vallée, the Prime Minister's press secretary , responded to La Presse that the decision rests with the Assembly of First Nations." [translation]

See how devious #Harper is? He agreed on a Friday to meet "the chiefs" on a Friday (under MSM radar, of course). And passes to them the buck of deciding if @ChiefTheresa will be there. So he has ceded nothing and creates division among the chiefs. Arrrgh! And it might just work! And he is hoping Ms. Spence will abandon her fast in the meantime... #IdleNoMore

Chief Spence is already on the record as saying she won't end her fast until after the meeting, and actual progress has been made.
As for whether she's going, is, of course, not at all up to Harper.
If she wants to attend, I'm more than certain she'll be accommodated.

Yes and no... as the brown-nosing, buzzword floating empty suit Parl Sec. Greg Rickford just said on Power & Politics, as far as the Govt's concerned, or at least wants to portray it as, this meeting is just a continuation of the (empty) process they've been engaged in since last year w. the AFN, and it's an AFN meeting, & has nothing to do with her (unless AFN decides to invite her).

I think if would be a great idea if the AFN selected a single chief to start negotiations with Harper. Of course that chief should be Chief Theresa Spence.

Harper will, as other PM's before him have done, get his photo-op while talking as much as possible without actually saying or committing to anything.

He's hoping that all the good little Conservative foot soldiers do their bit in repeating fabricated and misleading talking points until the whole Idle No More movement goes away.

hi fem_progress...yes I can read French. And I watched the newser so I heard the question. But it doesn't bother me because the AFN chiefs will invite Chief Spence to the meeting. I'm sure Harper is hoping that he can divide the movement, but the meeting will raise expectations that I'm sure he won't satisfy, so the movement will only get stronger.
The way I see it today was just another battle in a long war for justice, but we won this one, so let's celebrate... :)

Hi Troy...I must admit I'm a bit worried about Chief Spence. I don't want her to get sick and miss the meeting, for she definitely should be there. Some have the power of their titles, others have the power of struggle...

hi anonymous...well I'm certainly glad I missed the empty suit Greg Rickford. Canada is full of those dull, grey, Con drones, with no vision or imagination. The meeting should be what the AFN, Chief Spence, and the Idle No More movement decide it should be. I'm hoping it will be so exciting that the Con drone will stare at it in disbelief, beeping wildly, until smoke pours out of his ears...

hi Waldo...hey, I had that idea first !!!!! OK so I didn't but I think it's brilliant. At the very least she should be the first chief through the door. I also think that the Idle No More movement should be represented, so it's more of a summit rather than just another meeting. Because that's the last thing we need...

hi Shorter Net...yes no doubt he will try to do just that. And no doubt his racist monkeys will continue to smear native people. But that's what makes a movement so great. It doesn't fold easily...

This government is more dictatorship than democracy. We have no say either. Harper is handing Canada to China, on a silver platter. Harper gave China the resources and the resource jobs. Harper's omnibus bill? China has Harper's permission, to sue any Canadians getting in China's way. China sued in BC to take the mining jobs. Communist China has set up shop right on our Canadian soil.

Harper's omnibus bill gave himself, the right to contaminate our waterways and lands. If the F.N. don't want their water, fish and hunting grounds polluted, that's just too damned bad for them.

Harper even had the gall, to declare himself a Christian. When Harper was Policy Chief for his, Northern Foundation Party in 1989. Harper was linked to Christian Fundamentalists. What ever kind of religion that is?

How can anyone trust someone such as Harper? Scores of Canadians say. Harper cheated to win the election, with his robo-call fraud. Harper has done too much dirt to this country. How can Chief Spence and the F.N. trust Harper? He broke the F.N. treaty, in his omnibus bill. Harper deliberately did that. You can't trust that kind of a monster.

Harper will stand there and LIE to Canadians that he is not in any way affecting FN treaty rights. But that's what it IS, a LIE. The British Crown was obliged to honour native treaties. Idle No More is ABOUT asking the British Crown to honour the treaties it signed with the sovereign FN by revoking ‘royal assent’ for the 8 illegitimate treaty destruction bills hidden in Harper's revolting Omnibus bill, which violate the treaties and are meant to destroy FN.

Great Cowardly Leader hid them in omnibus. Eight of them are direct violations of treaty rights and impositions of legislation onto FN people, and changes to the Indian Act without the RIGHT to prior, and informed consent and the REQUIREMENT to consult.

Eight Harperland Bills the Cowardly Cons HID in Omnibus are DIRECT violations of treaties with FN As such they are acts of aggression. If they are given royal assent by the Crown’s representative, the GG, this colonial, unilateral and paternalistic legislation would open the way for a handful of multinational-corporations in the oil, nuclear and gas industries to tear up First Nations rights and tear apart their land for their profit.

Totally agree with you, wazz. This Harper meeting with the AFN (with or without Chief Spence) will be meaningless unless the Harper Regime agrees to reverse those 8 legislative changes and treaty violations that were hidden in that omnibus bill.