The Slow Death of Ashley Smith 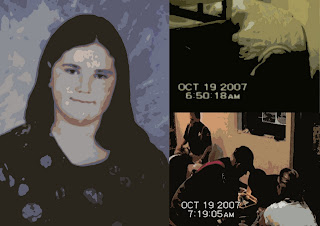 It is without a doubt one of the worst things I have ever seen. The slow death of Ashley Smith.

While her guards watched.

Read that and weep.

Or watch the video here.

If you can bear it.

Then read what the poor brilliant Aaron Swartz wrote about depression.

You feel as if streaks of pain are running through your head, you thrash your body, you search for some escape but find none. And this is one of the more moderate forms. As George Scialabba put it, “acute depression does not feel like falling ill, it feels like being tortured … the pain is not localized; it runs along every nerve, an unconsuming fire. … Even though one knows better, one cannot believe that it will ever end, or that anyone else has ever felt anything like it.”

Before he hanged himself.

Now imagine what it would feel like to suffer from something like that, and still be treated like an animal. Pepper sprayed, tasered, trussed like a turkey, locked in solitary isolation for months at a time.

Now ask yourself where this cruelty comes from.

And how many other mentally ill people are suffering in our overcrowded Con prisons.

Then maybe you'll reach the same conclusion I did.

And this is not my Canada...

It could, has and will happen again under other governments. It is sad, but Harper is no more at fault than the Liberals on this.

Give your head a shake man!

And not your "Canada"?

The problem is, in part, Simon, that those who understand need no explanation; for those who don't, no explanation is possible. The "don'ts" will say the same stupid don cherry-ish type of idiotic comments and never have a clue until, possibly, it hits them or someone they care about (if caring is even possible for the self-absorbed, ultra-rightwing christofascist fucking assholes) and they see or experience first or even close second-hand what this malady is all about. Most of them still won't get it because they're so absorbed in their moronic daisy-chain mentalities fomented by the government-owned m.s.m. (see sun and fox and world news) that they will still feel like the afflicted deserve it somehow. (see New Delhi raped-to-death victim)
This type of depression is a life-altering and very possibly, in some cases, life-destroying disease that needs to be taken much more seriously (see articles on u.s. soldiers suicide rates now being much higher than combat deaths for one poor example) but until the Mammon-worshipping right-wing christofascist harper regime is removed like the cancer it is, we, as a country, cannot even begin to hope that those afflicted will be treated in the manner that they so desperately need to be, let alone deserve to be.
Topic change. Did you see the "john baird hissy-fit" clip on the innertubes (for our fucking moron right-wing boys and girls) yesterday? It was terse, concise, succinct and to the point as well as hilarious. Great stuff! Cheers!

What you saw was state sanctioned murder. Also, a snuff film.

hi anonymous...do you ever read what I write, or does the very sight of my blog cause you to blurt out comments like somebody with Tourette's syndrome? What I said was that the cruelty of your smelly regime, and the way its jamming inmates into jails, is only likely to make the problem worse. Get it? And as for leaving, you go, to Alabama, and take rural Alberta with you...

hi anonymous.... I think you summed it up nicely:

Until the Mammon-worshipping right-wing christofascist harper regime is removed like the cancer it is, we, as a country, cannot even begin to hope that those afflicted will be treated in the manner that they so desperately need to be, let alone deserve to be.
You know I'm willing to forgive the Cons a lot of things, but deliberate cruelty isn't one of them.
And no I didn't see John Baird's hissy fit, but I find them so appalling I'm looking it up immediately... ;)

hi double nickel...I'll be honest, I didn't have the heart to watch that video. I know I shouldn't ask people to watch things I can't, but that kind of cruelty and bullying makes me physically ill. And yes, a snuff film would be an accurate description....

Actually you and yours should have been shipped-off too Louisiana, when we had the chance. Oh for a time machine.

That's an unfair statement about Tourettes. I was with you up until that point. Tourettes has a lot more to it than just blurting shit and even that, I know someone with it and he doesn't blurt anything at all.