Idle No More and the Great Day of Protest 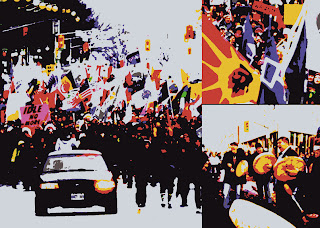 Oh boy. I sure picked the wrong day to be felled by the flu eh? Because I wanted so much to be there.

But even on the small TV in my death bed bedroom, it was an awesome and inspiring spectacle.

As members of the federal government and First Nations community met behind closed doors today, demonstrators marched in communities across Canada in support of the Idle No More movement, echoing calls from a hunger striking Ontario chief for indigenous sovereignty.

Thousands and thousands of First Nations people and their allies demonstrating and dancing together, and sending out the message: the time for justice has arrived. Finally.

And these are not requests, they are DEMANDS.

Of course, Stephen Harper did manage to cause some divisions in the ranks by trying to turn the meeting into just another photo-op. But he was forced to sit through the whole thing instead of just dropping in and out as he had planned.

Which must have been painful... 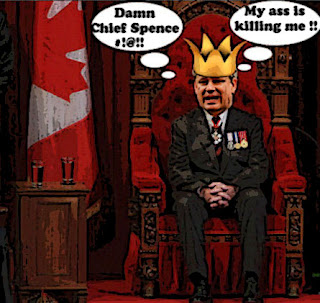 He's clearly on the defensive.

After four hours of talks Friday, First Nations leaders came out of the meeting with a pledge from Harper for talks on treaty relationships and comprehensive claims.

And this will ensure that the Idle No More movement gets even stronger:

Aboriginal Affairs Minister John Duncan told reporters the Conservative government will not give in to demands to reconsider the parts of the omnibus budget implementation bills C-38 and C-45 the Assembly of First Nations argued contravene their treaty and inherent rights.

And that it will be supported by even more Canadians, who also want to save their land from the Con regime and their Big Oil masters. 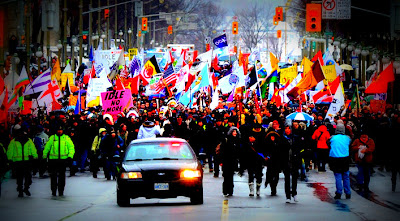 Damn. What more could I ask for eh? Even in my present condition. Except that the hideous bullies in the MSM stop attacking Chief Theresa Spence.

For they were at it again today. Beating up on her, questioning her motives, or just distorting the truth.

And it's so disgusting.

The Attawapiskat angle was so much more tabloid-friendly than history. It was character assassination by dull razor blade. There was no documentation for the expenditure of millions of dollars in public monies. There was no due diligence. She drove a fancy car. She gave her boyfriend a job. And by the way, the boyfriend once went bankrupt. When Indians weren’t sniffing glue, getting stoned or sobering up in the drunk tank, they were taking the public for a ride.

And so obviously just another drive by smear from Harper and his ghastly Cons.

When Chief Spence is a humble, decent, woman who has contributed mightily to this great First Nations rising. Has endured deprivation to draw attention to the plight of her people.

And is dearly loved by them... 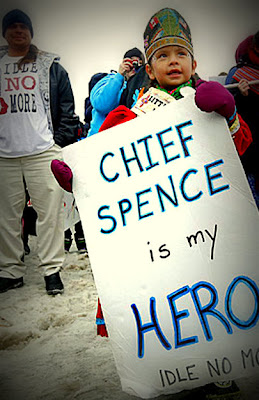 There are of course many dangers ahead on the road to justice, and a brighter future for aboriginal kids.

Because Stephen Harper is capable of anything. And now he's running scared, so he's even more dangerous.

For even he must know that if this revolt spreads it could destabilize his government, torpedo his plans to sell us out to Big Oil, and eventually bring his rotten Con regime crashing to the ground.

Wow. What a thought, and what a day. I started off thinking that I could die of the flu and never live to see Harper and his gang being led off to jail, or put on a plane to Alberta, or Alabama. Which almost finished me off eh?

Only to end up sitting up in bed, feeling a lot better now that happy day is even closer. And beating a big book with a wooden spoon to practice for the next demo.

For there will be many.

Way to go everybody. You were awesome.

And this is just the BEGINNING...

Thanks for your continuing coverage of this -- hope you recover quickly from the flu!

I hope you recover fully, Simon.

Hopefully, INM will continue to focus attention on the offending legislation found in those omnibus bills. Harper had time to meet with the oil industry before gutting all sorts of legislation in place to protect the environment (based on those stakeholders' recommendations) but couldn't be bothered with respecting the constitutional rights (section 35) to consult with FNs whose traditional territories and livelihood rights are directly impacted.

I too can't wait to see Harper and his gang thrown in jail. But I won't be as petty and vindictive as Toews and will allow them to have fundraising pizza parties.

Harper is no better than the Mafia. He is committing Grand Larceny Canada, as the MAFIA BOSS. He is a Traitor for giving Canada to Communist China. He is a Traitor for ignoring the F.N. Treaties. The media are propaganda machines for the government. They are just as evil as Harper. Their rancor towards the F.N. people, is out and out disgusting. They are a disgrace to their professions. Traitors to the Canadian citizens.

Neither the Queen not the country of England, object to those broken Treaties of the F.N, signed so many years ago, between the two country's. They don't interfere, so they say. Strangely, they didn't object to Canada, interfering in their war with Germany. They didn't interfere with our boys and F.N. boys, who fought in England's defense and died. They certainly didn't mind us interfering, sending them billions of tons of food, weapons and machinery. Not one word, for the plight of the F.N. people, nor for any of us.

What country's have supported Canadian people, against Harper's tyranny? His evil omnibull bill? Permitting Communist China, to sue any Canadians getting in China's way? Harper's omnibull bill, permits himself to, destroy waterways, fish and the F.N. hunting grounds. Harper may pollute any province he chooses to.

This has really been angering me, for quite some time. Everything the Canadian people have given to other country's. They have not one damned word, in our support.

None of them will ever get another donation from me. To hell with their earthquakes, volcano's, starvation, floods, droughts and their war torn country's. That's exactly how much, they have appreciated the Canadian people.

The one downer for me were the boos from FN people as Mathew Coon Come went to enter for the mtg with Harper and some attempted to block him
I listened to the reasons from the Quebec Chiefs earlier in the am on CPAC and I supported their decision just as I supported the decision of the Manitoba Chiefs
This am I was rethinking it all and tweeted to Russ Diabo:

@RussDiabo what would have happened had no Chiefs gone to mtg?

hi Cathie...thanks for your coverage of this great and promising movement. First we beat the flu, and then we beat the bigots... ;)

hi Beijing...thank you, I'm making a quick recovery thanks to Dr Seb who not only forced me to get the flu vaccine, but is also spoiling me rotten. ;)
I also hope that the INM will continue to focus on the omnibus bills, because that is something concrete that other Canadians can support. But as for allowing the Cons pizza in jail, I won't be as generous as you are... :)

hi anonymous...don't blame other countries for our Harper Con problem. I know that in Britain and other parts of Europe, and in America too, a lot of people support us. But of course only we can take care of the problem...

hi Oemissions...I too am disturbed by the Harper has managed to divide the Chiefs. But I'm hopefully it won't last long. For although I realize that there are some serious issues for the First Nations to work out among themselves, we need to confront the Cons with a united front....