Why We Should Thank Idle No More 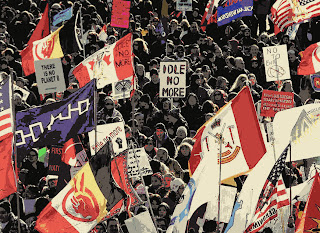 I was glad to see that Idle No More's Day of Action took the movement's message to Canadians.

From downtown Toronto to Vancouver Island, protesters ramped up weeks of demonstrations to another level, still peaceful, stopping traffic on busy highways and major rail lines, forcing Canadians to stop and listen.

And also glad to see that organizers like Stan Beardy, the AFN's Ontario regional chief, pointed out that the demonstrations are aimed at the Con regime.

In the face of protest-related delays for thousands of Canadians, Beardy hopes the public understands the fight isn't aimed at them. He also hopes they take the time to listen to Aboriginal concerns about Bill C-45, the second omnibus Bill C-45, which passed last month.

“Our fight is with the Harper government and we want the general public to understand that,” he said.

Because some Canadians clearly to be educated.

So that they can understand that they should be thanking the Idle No More movement for putting up a roadblock in the path of Stephen Harper's energy juggernaut. 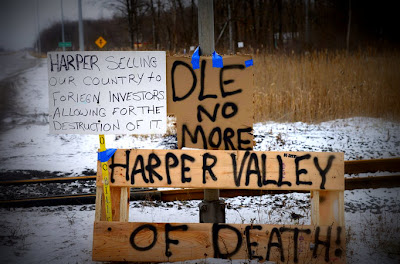 Certainly the prime minister has shown a ruthlessness in pursuing his goal of energy superpowerdom. He has gutted long-standing Canadian laws protecting the environment, ramming changes through Parliament last December as part of his controversial omnibus bill. He has thumbed his nose at global efforts to tackle climate change, revoking Canada’s commitment to Kyoto.

But, while there’s been some resistance from provincial governments, opposition parties, and environmentalists, Ottawa’s energy juggernaut has continued to surge ahead. At least until now. With the First Nations, Harper may have met his Waterloo.

Instead of mouthing off like ignorant rednecks at those who are fighting our battles... 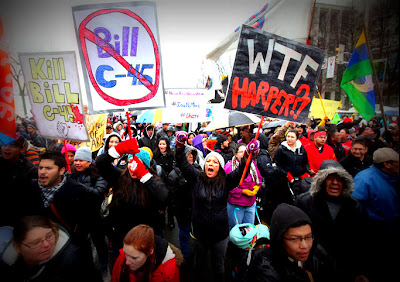 And are challenging the Con regime harder than it has ever been challenged before.

But of course the best thing those ignorant ones can do is do what a wise old Chief once suggested:

Never criticize a man until you've walked a mile in his moccasins.

Or in this case, don't criticize a people until you've walked two hundred years in their shoes...

Their cause is OURS. 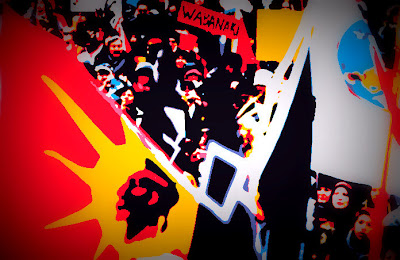 Many of us do realize, Chief Spence is fasting for all of us. Scores of us are sick to death of, Harper's dictatorship tyranny. Let us see Harper's books? The AG can't complete his books. Harper refuses to give the AG, the information he needs to do so.

Many of us see Harper, as the monster he really is. Harper is also a traitor, giving Canada to Communist China. Harper's asinine and evil omnibull bill, giving Red China the right to sue, any Canadians getting in China's way.

We know and appreciate the F.N. fighting Harper's omnibull bill. Harper has given his evil self, the right to pollute F.N. waterways, fish and their hunting grounds. People need to wake-up and see. Harper can pollute any province he chooses to.

We will be doing the same as F.N. We absolutely must get rid of Harper. If it takes blocking highways and railroads, so be it.

No Canadian has to obey Traitor, Treason Harper.

'new poll conducted by Ipsos Reid on behalf of the National Post/Postmedia News and Global Television.' (your link)

Those cracker ass right wing huckstering pollsters called my house and as I clicked away on my phone numbers at their loaded questions lambasting the repellent Harper Cons as best I could, I couldn't help but run through my mind how the inevitable poll headline would read, which undeniably would be all about 'Injuns Wrong, Polls Say.' Gosh hey? "left wing media' my ass.

hi anonymous...I'm not sure that blocking highways and train tracks is the way to go since it only alienates ordinary people. I would prefer to see new and more creative ways of protest, that can get the message out as effectively as the Quebec student movement did, and encourage others to support you...

hi wazz...OMG. You mean that poll could have been even worse than it was ? ;) But yeah, I got the feeling the questions were loaded because it didn't make sense. Canadians want a better deal for native people, but don't want them to say or do anything about it? Huh? And as for the MSM, I can't recall another time when so many performed so miserably. Shame on them...