Idle No More and the Real Terrorists 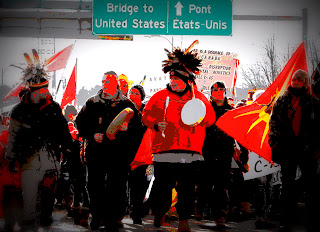 If Stephen Harper thought his grudging offer to meet with the AFN Chiefs would defuse the Idle No More movement, he couldn't have been more wrong.

From Sydney to Cornwall to Vancouver.

Because you can't stop a movement whose time has come eh?

Or it seems stop Christie Blatchford from smearing those in the movement as terrorists. Or suggesting they could threaten the future of Canada, by comparing what is going on to Douglas Bland's third-rate apocalyptic novel Uprising.

The story is one of armed revolution, or insurrection, by aboriginal young people trained and led by a disciplined core of native veterans of the Canadian army, all of them brought together by a charismatic aboriginal leader named Molly Grace.

The story ends with running gun battles in Winnipeg streets, a bomb in Montreal, violent takeovers of army bases and power facilities, casualties and death on both sides — and in the coming apart of Canada.

Which would be hilarious eh? In a violent video game sort of way. If Bland hadn't been a senior officer in the Canadian military for many years, and this didn't sound like something out of the movie Seven Days in May.

As Andy Bishop, the book’s Chief of the Defence Staff, tells the waffling defence minister as he dithers about what to do about the increasingly real signs that the country is under threat, “My worry is that very few national leaders, or opinion makers, or members of the courts, seem willing to accept the central notion that as a first principle a liberal democracy has the right to defend itself against anti-democratic elements in its midst.” 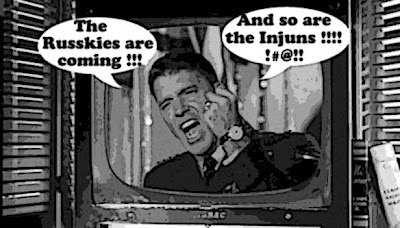 Even though the history of the struggle of our First Nations has been amazingly peaceful, considering the indignities heaped upon them. The history of our country has been one of compromise not violence.

And the real terrorists, or anti-democratic elements, are those in the Con regime who would despoil our lakes and rivers, by subverting our democracy, and breaking treaties, so they can sell us all out to foreign interests.

Not these peaceful protesters... 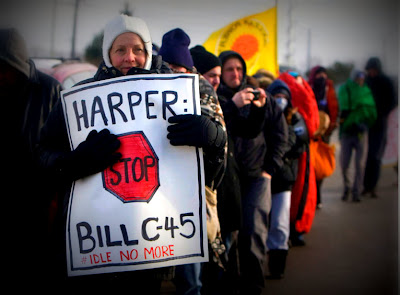 Who are only doing what more Canadians should have done long ago. Taking to the streets to tell the Harper Cons that enough is ENOUGH.

And the real threat to Canada comes from the disgusting bigots who have been flooding the pages of our newspapers with ugly comments like these...

For their violent words can only inflame the situation, poison the well, lead us to disaster, and destroy all chances of a new beginning.

Which would be a Canadian tragedy eh?

Yup. Now more than ever. Tell those bigots to take a hike.

Stand up for the power of peaceful protest. 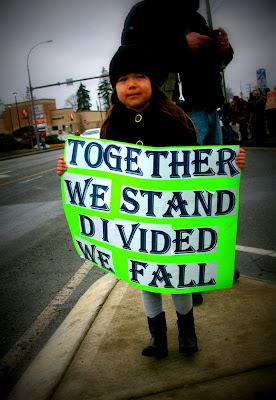 Join the revolt against the Con regime. 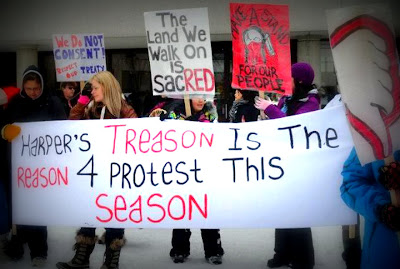 Belchforth has really lost it. Unless I'm missing something, "Idle No More" is about resisting harper's gutting of environmental regulations and unilateral abrogation of treaty rights.

It's not an assault on liberal democracy.

Her hero harper is a threat to liberal demcoracy but she's too stupid and too consumed with racist rage to process that.

Harper will promise the F.N. people anything. It will just take Harper until the next century, to get it done.

Harper's omnibull bill, gives him the right to pollute, lands, waterways, fish and the F.N. hunting grounds. Harper gave himself the right to do that, in every Canadian province. Provinces who want to save themselves from Communist China, need to leave Harper's Canada. However. No-one will see that either.

As the F.N. banner says. What Harper is doing to this county, is Treason. Only a Traitor such as Harper would give this country to Communist China, break treaties and all of the other vile incidents he has created and done in this country. Harper should be exiled out of Canada or, thrown in prison. He has no right to even live in Canada, much less govern.

hi thwap...of course you're right, the Idle No More movement is a combination of many things, but it was sparked by the gutting of regulations and the breaking of treaties, and by opposing the crude way the Cons rammed the legislation through Parliament, they are defending our democracy not hurting it.
And yes, Harper and his ugly Cons are the greatest threat to our democratic traditions this country has ever seen...

hi anonymous...no doubt Harper will put on a show of caring about FN issues, but what can he do? When Big Oil is pulling his strings, and he isn't big enough to admit that he was wrong?
We need a leader with vision and we don't have one...

hi simon, I agree with you but i think our leaders are coming.