Stephen Harper and the Christianist Threat 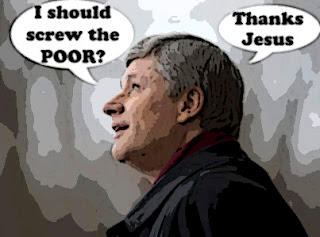 Uh oh. Praise the Lord and pass the ammunition. Stephen Harper has admitted he is getting his guidance from above.

Asked about how faith influences his decisions, Harper said that he prays regularly to “ask for strength and for wisdom.”

But doesn't explain why he is ignoring the ninth commandment: Thou shalt not bear false witness.

But given Canada’s diverse population, he said he’s also careful not to impose “my particular theological views on the country.”

Because that's either blasphemy or bullshit. Or both.

When the scary fact is that Canada has never had such a Christianist government. And the  religious fanatics in the PMO and the Con caucus have never been more out of control.

Many of the young operatives who run the PMO are graduates of the Republican School of Political Theology.

The wingnuts in the caucus have declared war on Canadian women, by introducing one abortion bill after the other.

The Con regime discriminates openly against LGBT people, by denying them any kind of government funding. It killed a motion to protect bullied kids, just to please its rabid anti-gay religious base.

Even as it funnels millions into faith based organizations, like the Youth for Christ movement.

Its foreign policy in the Middle East is designed to please the Christian Dominionists like the PMO's bigot chaplain Charles McVety, who believe that the "Messiah" will not return if the Palestinians get a state.

A big chunk of the pastors’ trip is being spent in Shilo and Ariel, which according to McVety are not Jewish settlements in the West Bank. “First of all, they’re not settlements but towns and villages,” he said. “Second, this is Judea and Samaria, not the West Bank, and to say that a Jew cannot build a house in Judea is stupid, moronic and anti-Semitic.”

And that The Rapture could happen tomorrow so there is no time to lose... 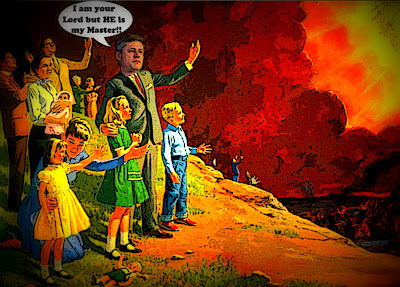 And even the Con regime's views on science and the environment are heavily conditioned by its weird religious agenda.

Almost daily, more evidence surfaces that Canada's government is guided by tribalists averse to scientific reason in favour of Biblical fundamentalism -- or what some call "evangelical religious skepticism."

Given his government's pointed attacks on environmentalists and science of any kind, Harper would seem to take his advice from the Cornwall Alliance, a coalition of right-wing scholars, economists and evangelicals. The Alliance questions mainstream science, doubts climate change, views environmentalist as a "native evil," champions fossil fuels and supports libertarian economics.

And of course this is outrageous:

He (Harper) said tragedies like the school shooting make him reflect on his faith. “There are times like this where you know where we’re all reassured by the fact that there is you know a benevolent power ultimately looking over all of us,” he said.

Not only because it's totally insane. But also because Great Faith Leader is flooding Canada with dangerous weapons and clearly worships a different Jesus... 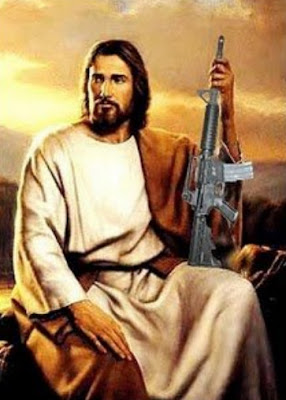 The one who urged his flock to kill their brothers and sisters, and screw the poor.

But despite that grotesque hypocrisy, the truth is ever since the Harperites came to power, it has been boom times for the PMO God Squad.

And if anyone thinks this situation is going to get better, rather than worse or more deranged, think again.

Because thanks to cutting the funding to political parties, the Cons are now even more dependent on the money they get from their religious base, for whom hate is the first commandment. And as the next election approaches, they will demand their pound of flesh.

And of course the most absurd thing about this madness is that the Cons have John Baird, of all people, setting up a mysterious Office of Religious Freedom. 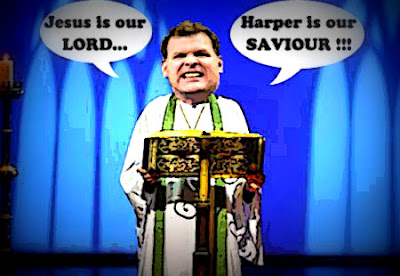 When what we really need is an office or a government that will protect us from the Cons and their religious maniacs.

Yup. Don't believe a word they say. This is the most theocratic government in Canadian history.

Don't let their soothing words fool you. Judge them by their actions.

See them for who they really are...

Religious fanatics with an agenda that is becoming more and more aggressive and blatant.

Then organize, unite, defeat them.

Tell them Canada is a secular state.

And send them back to the hell they came from...

It is easier for a camel to go through the eye of a needle than it is for a rich man to get into heaven.

He [i]is[/i] a hypocrite. A big fucking hypocrite.

Thwap, did you claim that Harper was going to be defeated by the fall? What happened to that prediction? Care to explain?

Didn't everyone see Stevie on the telly? He claimed to be a Christian??? He prays everyday of his life???? Hmmmm?

Don't be so cruel to Stevie. When he was Policy Chief of his Northern Foundation Party in 1989, he was connected with Christian Fundamentalists.

Have a look at Laila Yuiles web site. There is a video, paying tribute to Harper.

He said, he did pray for the little children, who were murdered in their school. Meanwhile though? Does Harper pray for the F.N. kids, who commit suicide because, they see no future for themselves? What a wonderful Christian Harper is, by refusing to speak to Chief Spence.

Does Harper pray, as he in giving Canada to Communist China? Did he pray when he gave Red China the right to sue any Canadians, blocking China's takeover of Canada?
What prayer did Harper utter, when the corrupt BC courts awarded, BC's mining jobs to Red China? Is Harper's best buddy Gordon Campbell a Christan too? Did Campbell pray, when he thieved and corruptly the BC railroad? Did they pray when, Campbell gave Red China, BC's resources and resource jobs? A very long time ago at that.

Of course, Harper is a Christian. He came right from, the ninth ring of Dante's Inferno. As did, his partner in crime Gordon Campbell.

hi thwap....honestly I don't know what to believe. Sometimes I think that Harper is a real theocon, and that it's an integral part of his deranged personality. And other times I think it's just an act. But one way of the other he is a hypocrite, for no real Christian would act like he does...

hi anonymous....as I told Thwap I don't know if Harper is a Christian or whether he is just faking it. But if he is a really bad Christian and a complete hypocrite. For once he condemned the Chinese government as Godless atheists, and now he's in bed with them...

Regarding his christianity I have has the misfortune of working with ppl who attended a church of christ. I don't know the exact denomonation and prefer to be willfully ignorant. However my point is that while trying to get me to come to church they gleefully explained that accepting jesus as my saviour means accepting the fact (haha) that I will sin and therefore be absolved of all sins. Seems as tho harper et al subscribe to this philosophy of not trying to do good bc sins are already forgiven. Long story short I held firm and told this person I'll continue to believe there was a great storyteller named jesus 2000+ years ago.