Stephen Harper and the Big Sellout 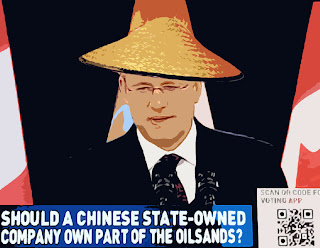 Historians will probably debate whether it was the strange smile, or the way he opened his mouth and showed his teeth, that gave the game away.

Or whether it was the spiffy straw hat.

But nobody will be able to deny that Great Helmsman Leader tried to do the impossible today.

Sell us out to foreign interests.

The federal government has approved two major energy takeover deals, green-lighting a $15.1-billion bid for Nexen Inc. by a Chinese state oil company and a $5.2-billion bid by Malaysia's Petronas for Progress Energy.

While posing as a Canadian nationalist.

The prime minister emphasized that the decisions "are not the beginning of a trend but rather the end of a trend." "When we say Canada is open for business, we do not mean that Canada is for sale to foreign governments," Harper said.

And a Big Oil stooge. All at the same time.

"To be blunt, Canadians have not spent years reducing the ownership of sectors of the economy by our own governments, only to see them bought and controlled by foreign governments instead."

And of course failed miserably.

For selling out Canada to Exxon is no better than selling it out to CNOCC. A sellout is just a sellout. And all these big oil deals do is hollow out our country further, export profits, kill jobs in the rest of the country, drive down wages, wreck the environment, and place our destiny in the hands of foreigners.

But if it's Friday it must be Nexen eh? And boy can we work with that one.

A recent EKOS poll of 1,181 Canadians showed tough sledding ahead in selling the CNOCC offer to Purchase Nexen. While there is still flexibility in public opinion, the strength of current opposition will be a huge problem for those seeking to move forward. Barely 15% of Canadians support the deal with a picayune 3% supporting it strongly. On the other hand, 73% oppose with the plurality (42%) strongly opposed.

Even in Alberta, support only climbs to 29% and amongst Conservative supporters, the number is a similar 26%. Overwhelming opposition exists in pretty well all portions of Canadian society but it particularly staunch amongst NDP and Green Party supporters.

For if Canadians feel so strongly about Stephen Harper jumping into bed with the old men of the Chinese Communist Party.

So soon after his crude affair with Benny Netanyahu... 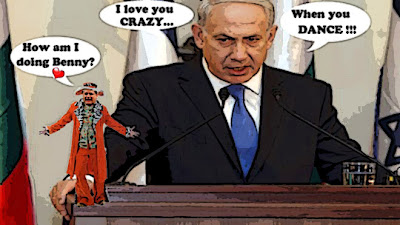 I think it should be even easier to convince most Canadians that he's just a shameless oil pimp who would pose as a patriot, and sell us out to foreign interests and foreign governments.

The leader of a rogue nation who is losing his grip on reality.

"We're boy scouts on the rule of law like nobody else in the world and I think it's an attribute we're proud of," Harper said.

And then if we can convince the Cons in Alberta that the Chinese are secretly planning to read their minds, steal their guns, turn them into godless atheists, and force them to speak Mandarin.....which should be a cinch.... it'll be game over eh?

Yes. Yes. I'm sure I can work with this one. Simple messages are the BEST.

Have a great weekend everyone.

The people of BC have been saying since, way back in Gordon Campbell's reign of terror in BC. Watch out. China is sending their people to school, to learn 100 English words, so they could take BC mining jobs. Now, anyone wanting BC mining jobs, has to speak Chinese Mandarin, to work in our own damned English speaking province. No-one listened.

CSIS even warned about, Communist China's huge inroads into Canada. BC was specifically mentioned. Campbell sold BC out to Red China long ago. No-one listened to us.

I would think by now? Canadians must know? Ex BC Liberal Premier Gordon Campbell, works for Harper and didn't work for the BC people? The plot to sell Canada out to Communist China, was plotted by Harper and Campbell long ago. They signed a sneak deal behind our backs. Harper can force the Enbridge pipeline into BC. However now. Harper has given Red China permission to sue any Canadians who block China's takeover of Canada. Campbell's second election lie, the HST wasn't on his radar? Harper was drooling at the mouth for BC'S HST, they forced that illegal tax on BC, during the deep recession. Campbell also lied about BC's stance in the recession. We only had a wee tiny little debt. Harper rewarded Gordon Campbell, the High Commissioner to England post, for doing his dirty work for him. A BC LIBERAL PREMIER, get it?

Absolutely everything to do with Harper, is dirty. BC said so for years, no-one listened to us. The next thing is...We must keep Canada intact, so we can all be taken over by Red China, in one giant wealthy package.

Issues like that is what I.N.M. IS FIGHTING AGAIN'ST because our lush economical forests, rivers, and lakes are being destroyed.

You nailed it , after Harper , then Trudeau , comes the death knell of Canada. We will never recover .