Idle No More and the Power of Solidarity 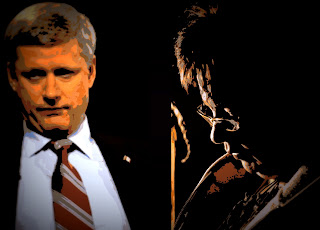 One day historians, or forensic psychiatrists, will no doubt argue over why Stephen Harper was prepared to let Chief Theresa Spence die.

Was it because that cold, cruel, man couldn't feel the pain of others?

Or was it because he was a coward?

But all I can say today is thank goodness for the strength of Chief Spence, still calling for solidarity even as she grows weaker.

Thank goodness for all the politicians who visited her today, and the decency of Joe Clark.

In a statement after his meeting, Clark said that "there is a general concern that First Nations - Canada relations are headed in a dangerous direction."

"Chief Spence expressed a humble and achievable vision - one which I believe all Canadians can embrace," he said, adding honest dialogue and mutual commitment can carry-out her vision.

And wasn't it great to see how many people answered Chief Spence's call all over the country?

Because there has never been a better time to show solidarity with our aboriginal brothers and sisters. Not when it could save the life of Chief Spence. 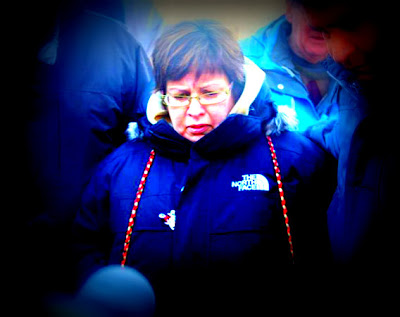 Not when her demands are so humble, and her cause so just. And not when solidarity can lift your spirits like nothing else.

For I remember a time during the Quebec Student Strike when the police were attacking and arresting thousands... 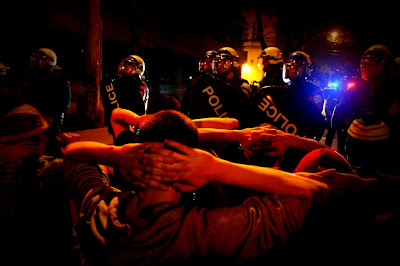 The MSM couldn't say enough bad things about the students.

The rest of the country was so silent.

And although I never doubted that we would win... 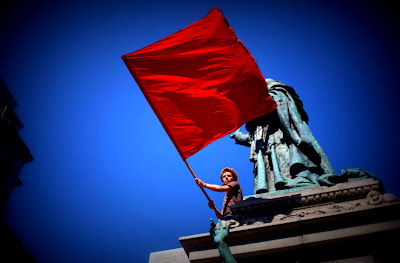 I have to admit that every now and then defiance surrendered to depression.

Until one night I saw this little video...

And it raised my spirit like they raised that banner eh? Made it soar like an eagle.

Because I know that when progressives support each other NOTHING can stop us from building a better world.

Here's to Chief Spence and the Idle No More movement.

Down with the cruel and un-Canadian Con regime.

See you at the next flash mob or demonstration. 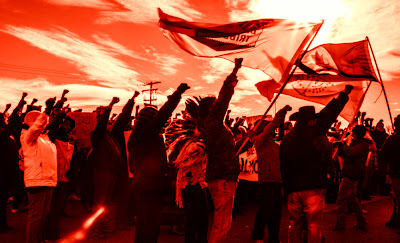 Let me know if you isolate or can identify a single shred, gene or chromosone of courage, compassion, honesty, or any common Canadian attribute in the infected cesspool of Harper, Baird, Oliver, Kent, Ashfield, Duncan, Clement, Kenney, Flaherty, Mackay, Fantino et al..

These are a surprising group of vapid, shrill fuddle duddle men with serious mommy problems. Throwbacks to the old colonial Hudson Bay colonial daze where you could hide behind government lawyers, corrupt courts and the 'power of the crown' .. be a Kings Man .. even if you were not really a man.. mut rather.. a fabrication of .. dull, pudgy, loud, wealthy or funded or acquiescent bought n paid for facsimile.

This smacks of how Auld England ruled that an Irishman could not ride or own a horse. A woman culde hardly be allowed to vote.. Who would look after the children or having more of them while cavorting so in public?

This is the clash of lowly, simple, closely bound to the earth indigenous culture, once again .... with the besotted, elevated, close to godhood and benighted WASP species, the so called and oft self described 'upper class'

This is a duel best conducted in six feet of muddy water, with sledge hammers.. not at 20 paces with pistols.. or as Stephen Harper would prefer, sniping legislation twisting from afar, long before the 'rules of engagement' are even discussed.

Chief Theresa Spence, in a very unusual and timely way.. represents Canada, as a 'your not the boss of me' impediment to Stephen Harper's odd colonial - I must get my way - childish, self centered barbarous wannabe gunslinger cowboy army Sergeant Rock wet dreams.

Live or die .. exactly how does Stephen Harper 'bury' or hide Chief Theresa Spence ? Funny .. she just won't behave like a prorogue, an F-35, a redacted document ... or a good Injun ... Instead she shows up on his doorstep.. in a teepee .. armed with no lawyers, cavalry, ministers, aides, or hordes or back room bumboyz .. just herself.. holding a feather .... mmmm

harper is complete, amoral scum. he might actually be calculating that Spence's death will lead to violent demonstrations that he imagines can be used to justify a crackdown.

Unfortunately, even progressive Canadians contribute to this idiocy by having conniptions whenever a window is broken and by repeating (like parrots) that isolated acts of vandalism "justify" the resultant crackdowns.

I don't know if harper is hoping she dies or if he's dithering, torn between his missplaced pride and his fears of the repercussions of her death.

The more you hear the ignorant, nitwit and racist bigots in the CON base screaming 'the Indians get MILLIONS! And they BLOW IT ALL on wages and administration! Where does MY money go!!, the more ashamed I am of this whole episode. Not just because the PM would let a woman starve instead of talk to her, which is fucking repulsive enough, but also because the people supporting his inaction are just as much of an embarrassment, lacking in grey matter as they do. For, unbeknownst to Harper worshippers, FN Bands are required to submit annual audits and financial statements in order to qualify for further funding. FN like Attawapiskat are audited every year and the records are in the public domain. Attawapiskat has published its financial statements since 2005, all you have to do is look online at them. It's all there. Every penny and where it was spent. Harper knows exactly where the funds have been spent but as usual he is lying to Canadians to play politics. As for the mud dumb stupid CON base screaming how the Indians 'blow' money, well, every cent is audited and accounted for and can BE SEEN and VERIFIED. Boy oh boy it is hard to fathom how STUPID these CON shills are, screaming and making up numbers when the actual ones are online in the public domain.

And further to THAT, Ministerial approval from Ottawa is actually a requirement before any capital expenditures can occur on a reserve. This is why claims of 'FN's waste the money' are so ridiculous; because all expenditures were signed off by Harperland. A First Nations band will generally pass a Band Council Resolution on expenditures (say on housing and education), and that must be forwarded to Ottawa for approval. This whole thing is a disgusting CON charade to pander to its nitwit, ignorant and quite frankly racist base.

hi salamander...hmmm...maybe I was a bit naive to expect anything from the Cons, even though the relationship with the FN should be above politics. But I still think it's good to hold them up to a certain standard of decent behaviour, so we can illustrate how low they are, and how low they would take us. Unless someone can persuade Harper to show a little class for once, or dare I say a little humanity, this situation could end very badly...

hi thwap....Harper is a clinical psychopath so he can't feel sympathy, he can only calculate whether it is good for him or not. So hopefully he can be persuaded to meet Chief Spence, for her death will do him no good.
But Harper is such a weirdo who knows what he might do? So as I told salamander I'm hoping for the best, but fearing the worst...

hi Wazz...I have been avoiding the comments section so I don't have to be exposed to the ignorance and racism of the Con base. And as you say it is just another Con charade, to blame the victims, as they do with every other group. And since it's aimed at the poorest of Canadians it's absolutely disgraceful. The Cons are the last people on earth to be accusing others of corruption, for they are standing on a heap of manure as big as a castle, and they are the ones who should be audited...