The Cons and the War on Christmas. Again 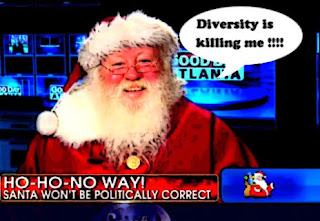 Oh no. Just when I thought the War on Christmas was over. Here it comes again.

As brought to us by Bill O'Reilly, the Fox Nation, and this year by Santa himself.

Fox and Friends took its coverage of the so-called “War on Christmas” to the front lines on Thursday morning by inviting Santa Claus to weigh in on America’s changing culture and secularization.

LIZARD: I have. You know, I never had a problem being Santa Claus, but there was a time a few years back when suddenly I started showing up at Christmas parties and was told that they were having holiday parties. So therefore, they didn’t need a santa anymore.

And in Canada by Nina Grewal.

“It is truly wonderful that all faiths can celebrate openly here in Canada,” she said. “How can we as a society join together to celebrate Diwali, the Chinese New Year, Hanukkah, and Vaisakhi but at the same time rob Christians of the true meaning of Christmas?”

“True diversity means respecting the traditions of all Canadians, including those of the Christian majority.”

And of course Tony Clement... 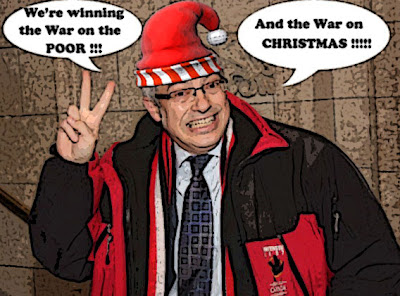 Sending out their annual message to the Con's rabid religious base: We are on God's side and we won't let the liberal heathens steal your Christmas.

When in fact, the last time I checked Christmas was doing just fine. A little bruised from getting elbowed in the face by crowds of frenzied shoppers. But alive and well and humming like a cash register.

And the whole War on Christmas is just a Con invention, and an assault on diversity...

Which is why when I hear that hateful song.

I prefer this version...

For that's what this season means to me. A time to eat, drink, and be merry. A time to be with your family, and party with your friends.

A time to be extra kind to those who are sad and lonely, and hug the ones you love.

Hey, don't forget to ask Santa to bring us a new government eh?

I too prefer your version of what is right with the world. And Five Golden Rings for each continent and its people does equal DI-VER-SITY!

I'm wishing you and Sebastian much merry-making and happiness this Christmas.

This may be the last year we will have a nice x-mas. Canada somewhat is still, a remotely, free country. Don't count on next X-mas. Harper does say, he is a devout Christian. He "prey's" every day, so he says. We haven't been able to stop laughing, ever since we saw that on TV. Harper's gift to Communist China is, Canada served up on a silver platter.

We all know? Harper has given Red China the right to sue any Canadians, blocking China's takeover of Canada. BC has a totally corrupt judicial system that, awarded Red China all of BC's mines and mining jobs. Do people remember? The trial in BC, of Gordon Campbell's theft and corrupt sale of the BC Railroad? It was so blatantly corrupt and disgusting.....That is still known as, the sleaziest crime in Canadian history. Campbell also works for Harper, to this very day.

Harper said. He would change Canada so much we wouldn't recognize this country? Well we do recognize, Harper has given Canada to Red China. Canada will look like, an occupied country to me.

Canada's Democracy is now gone. Our Charter of Rights is now an out and out joke. Our Civil Rights and Liberties, have been taken from us. Our Freedom of Speech will be taken. Our Human Rights, are pretty much the same as China's now. We see how deplorable, our F.N. Peoples Human Rights are. That's exactly the way it is in, Communist China.

Ouch! I think the fact the lyricist couldn't even come up with a full set of lyrics for that first "song" speaks volumes of the intelligence levels involved there. That was some pretty fancy footwork going on in that second vid though! I'll never but those moves but I suppose that's what New Year's resolutions are for.