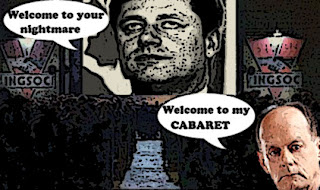 He is the worst and most divisive Prime Minister in Canadian history.

A cold, cruel, right-wing ideologue who is trying to change this country beyond recognition, without the consent of most of its citizens.

He has made a mockery out of our Parliament, bullied his opponents, and muzzled scientists. He is a tool of Big Oil, who is selling us out to foreign interests.

He has raped our values, and shamed us in the eyes of the world. But still Rex Murphy wonders why so many Canadians hate Stephen Harper.

My, how the spine chills when some people talk and write about Harper.

And blames them not Great Ugly Leader.

With Stephen Harper the emotions he elicits — especially the extreme ones of contempt and near-hatred, have to be a projection of his enemies, far more than an assessment of Harper’s character or policies.

Can you believe that eh? Welcome to Rex Smurphy's Harp Daddy Cabaret.

Give the man a Senate seat... 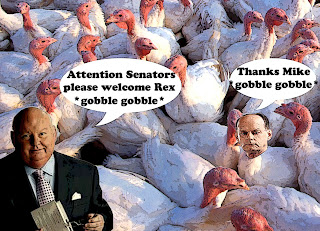 Because even by the standards of that wretched climate change denier, Con tool, and Canadian teabagger, that's absolute nonsense.

People don't hate Harper for being a ridiculous vengeful nerd with delusions of grandeur. They hate him for what him and his foul Con regime are doing to Canada.

And the real scandal is why so many in the MSM were so late to recognize the danger. Why they spent so much time calling him a "political genius" instead of a morally corrupt would be dictator. Why they lacked the courage of their convictions, couldn't see the forest for the trees, and failed to warn Canadians until it was too late, and the Cons had stolen an election.

For if they had done their democratic duty better, so many Canadians wouldn't be so frustrated and so angry.

And these kind of coarse rednecks wouldn't be disgracing our country.

Oh boy. Smurphy, you Con tool, you teabagger, you bore, you IDIOT.

You Tweedle Dum and Tweedle Cherry... 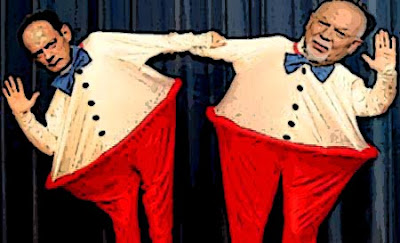 Where did you ever get the idea that Canadians don't have a million good reasons to hate Stephen Harper and his crazed regime?

Or that they would just shut up and take it.

Or live happily on their knees...

If you love Canada.

Murphy, like Don Cherry, needs to retire and fade into obscurity. The media bears much of the responsibility for communicating harper's fake message to the electorate. For Murphy to say that harper is not out there making a grand spectacle of himself is simply not true. The man spends most of his time traveling the world courtesy of the taxpayer, making backroom deals that will continue to gut our natural resources and risk what is left of our economic well being. Not to mention turning the country into an enemy of the environment, which is the greatest danger that this despicable person has wrought on Canada. How's that for a rant Murphy, you stupid, boorish little man.

Harper isn't too tightly wrapped. Neither are Murphy and Don Cherry. All birds of a feather, you know?

Rex Murphy is an egghead moron, man. Because Toronto had a 'cool summer' a few years ago (while other parts of the world like the north and eastern Pacific, north-western Atlantic, Africa, Southern Europe, and Siberia were much warmer than normal) leave it to a nitwit like Murphy to proclaim global warming is not occurring, and in fact to burp that the atmosphere is COOLING. His wilful ignorance about the difference between weather and climate is pathetic. The churlish little moron thinks Toronto's weather is indicative of 'global' cooling. The guy is as stupid as a tea bagger and just as butt ugly as most. And he'll continue prattling on even though 13 of the planet's hottest years on record have occurred in the past 15 years because to admit he’s a fucken idiot and wrong would dent his massive ego, the narcissist.

So you saw where the column was printed, should have been the first clue. Rex Murphy either wants a sentate seat or he is trying to curry some favour for something or he just wants the publicity.

Harper, in my opinion, ought to be tried for treason. It is one thing for a large multinational corporation to purchase shares in a Canadian company but to have another government purchase a company which is involved in Canadian business is just plain stupid. And it isn't even just any country, although I'd object regardless of the country, but the company is owned by the Chinese government. One well known for its corruption, murdering its citizens, no respect for the enviornment, restricting religion, and the list goes on.

It is rather entertaining to see the Cons sign an agreement with a country which has used abortion to enforce its one child policy & supresses religion. Now you might say business is business but really at some point, if you have any ethics, you do have to draw the line. Oh, right they are Cons & they lack ethics.

Why treasonass stephen sold Canada to China, I do not know. All I can think of is the old saying, "follow the money". Who gets what & from whom. The Cons pursuit of attempting to restrict rights, Canadians have enjoyed for years, is most likely to bring Canada into line with Chinese government philosphy.

Selling coal to China so they can fire up 1,200 new coal burning plants to produce electricity is just plain stupid. The earth moves on its axis. Air moves with the wind. We will get all the shit they put into the air. It doesn't just stay in China. Where do the Cons think they can live to avoid all the pollution & I'm not even talking climate change, just plain old pollution.

Rex Murphy, if he wants to love treasonass stephen, fine, just don't expect the rest of Canadians to