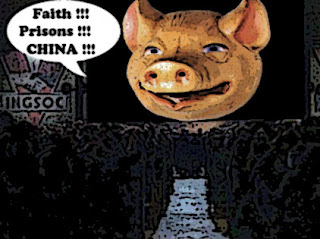 Well I suppose we should have known eh?

This is after all Con Canada, home of the Porky Action Plan.

But it turns out that if we want to know what's in the Nexen deal for Canadians, we have to ask the Chinese.

Canada’s Industry Minister is remaining tight-lipped over the specific "net benefits" Canadians can expect in exchange for the sale of Alberta-based oil and gas company Nexen to a Chinese state-owned oil enterprise.

Paradis said he was "not allowed" to go public with the details of what is a commercial sale, indicating that it is now up to China to reveal so-called benefits to Canadians.

Great eh? Because you know how they feel about revealing ANYTHING. And with friends with benefits like that you know who is going to get SCREWED.

And it's NOT going to be the Chinese Communist/Capitalist Party... 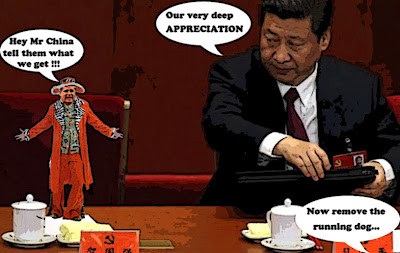 So why are we selling out our country so cheaply and so massively? Why are we letting foreigners walk all over us? Why are the Cons letting other countries treat us like we were some kind of Banana Republic?

The economic math on bitumen adds up to some desperate equations. To save bitumen from a production glut and a global economic reckoning (and that reality check is still coming), the Harper government has sold out Canada, debased democracy and fouled the nation's reputation.

So Canada's bitumen Titanic has now left the dock and the chief pilot, an Imperial guy, does not believe in icebergs or lifejackets. However, he has hired a Chinese band as well as some Communist Party engineers to bail water. Everyone except the obsessive captain expects an explosive collision with the bergs of global public opinion, the Canadian electorate, carbon taxes or intemperate oil markets.

And that's generally what economic desperation reaps in a feckless petro state: a voyage of the damned.

And why are we embarking on this voyage of the damned? To make investors in Harper's oil patch richer.

NDP Leader Thomas Mulcair says the shareholders in “Mr. Harper’s oilpatch” are the only Canadians he sees benefiting from a Chinese state-owned company’s successful bid to buy a Canadian energy firm.

While the rest of us get poorer, and we all lose control over our destiny

Oh boy. Talk about a great betrayal. I just don't know what to call those sellout Cons. Are they economic traitors,  stumble bums, running dogs, or just the same old Harper hogs? 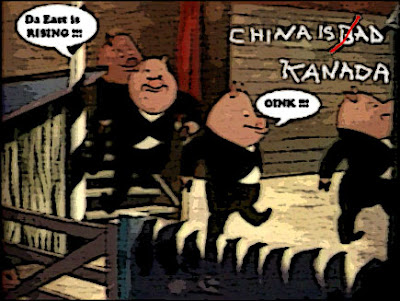 But it really doesn't matter. Any of those names will do, and when they start to stick to them, like flies on stink, it will be game over.

Desperate leaders make mistakes. Harper just made a big one. And it's going to cost the Cons the next election. We'll make sure of that. If we can't arrest them for electoral fraud, or defecating in the House of Commons, we'll arrest them for treason.

And the bad news?

You know the voyage of the damned that the Cons are now taking us on?

Until we get rid of Great Helmsman Leader, and his bozo crew of scurvy sellouts.

Hang on to wallet AND your tuque eh?

Because it's going to be a REALLY rough ride...

And NDP Leader Thomas Mulcair says the shareholders in “Mr. Harper’s oilpatch” are the only Canadians he sees benefiting from a Chinese state-owned company’s successful bid to buy a Canadian energy firm.

The NDP were complicit in the first great betrayal and were fine with the proof backing up this income trust fraud = blacked out documents.

While the rest of us get poorer, and we all lose control over our destiny......we have the NDP supporting the biggest double-cross in Canadian political history, a double-cross that wiped out a huge chunk of the savings of workers and retirees.

There was no tax Leakage...period....it was a fraud supported by the NDP and an abandonment of seniors to support a policy ( or lack of...blacked out ) of unions and their pension funds like Ontario Teachers Pension plan and all union pension funds which are exempt from the proposed tax. The NDP made a deal with the devil and robbed seniors of $35 billion of hard earned retirement savings.

70 percent of Canadians belong to no union and have no pension. Unions were able to purchase income trusts and pay no tax while this 70 percent of Canadians pay a 34 percent tax. The NDP supported the biggest double-cross in Canadian political history, a double-cross that wiped out a huge chunk of the savings of workers and retirees for the benifit of their union masters.

The Honorable Dave Lewis described the NDP,s new allies as " Corporate Welfare Bums ".
They ignore retirees and small investors and side with right wing Cons, helping the richest of the richest.

In dictatorship country's, elections can be rigged and cheated? Can they not? Going to court over, Harper's robo-call election fraud, is a waste of time. Harper is no different than the other dictators, he controls all. Judges even overrule other judges, especially when, they are under Harper's dictatorship.

In Germany some of the Jewish people, had the sense to get out of Germany. The ones that stayed? We know what happened to them.

It's the same in Canada. I have asked this question, hundreds of times. What is the point of keeping Canada united? Is it because, we must be swallowed up by Communist China all together, in one huge wealthy package? Are we really that stupid? Yes we are. Provinces with natural resources, can't wait to give their resources to Communist China. They just can't wait for China, to take all of their resource jobs too. What does our useless, gutless wonders of the opposition do? Squat, that's what. Elizabeth May was the only politician, that spoke against Harper's treachery.

However, Canadians do what we do best. We just sit and bitch about it.

Anon 303. Here here.I totally agree. It is in most part the NDp's fault we got saddled with Harper the dictator and screwed the retirees incomes with the income trusts. They also stood with Harper to vote this dictator as PM all for a few votes. They sold their souls and Canadians in general will not trust them ever again.I have no doubts about that.

You are absolutely correct. Bitch and do nothing about it. Not only do we have one communist leader, we now have two, Mulcair , Harper's bossum buddy.
They are both guilty of treason and I Believe most Canadians will dump them into the garbage bin in the next federal election.

Probably the only part of Canada which will be left, will be Quebec as funny as that may seem.

Even after the cons are removed from office, we will still be left with the agreement with China, unless we can demonstrate the contract was illegal.

these deals benefit the oil patch, China, and, "follow the money". I don't know why Harper did what he did but he has clearly demonstrated he is not fit to be the Prime Minister of Canada. He sold this country out. He has violated our democracy. I am sure they are currently working to steal the next election also. Canadians may want to consider having international obervers come in to supervise our federal elections.

What is interesting is if they can't build the pipeline the the west coast, what will China do? Most likely take Canada to some secret tribunal & win. What will happen when Canadians provide armed resistance to the building of pipelines across our country? If Rafe Mair can talk about it in his columns than we are closer to it than some might think.

Christie Clark may like to say, Canada starts here, well if this pipeline goes ahead so will China.

Stephen can make anything sound totally correct, practical and sensible while he interprets for "Canadians" their Canadian position on the topic of the day.except for the F-35,but he can get around that one too.
After all, he is the only one who knows what's best for Canada.Let's be clear here.