Idle No More: The Sounds of Resistance 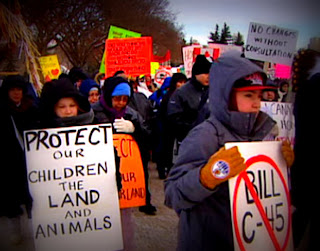 It was a wonderful sound. A glorious sound that made my spirit soar like a bird.

The sounds of native drums beating all over North America.

Native protesters across Canada pounded their drums in unison Friday demanding treaty negotiations between Ottawa and aboriginal chiefs throughout the country.

Supporters of the 18 Idle No More rallies staged throughout the continent say their resistance to the Harper Government is just beginning.

In the spirit of preserving what we have always seen as a sacred tie to the land, and strengthening our culture, First Nations people across the country are banding together like never before.

When we think of the Oka crisis of 1990, we all think of that one shot of the warrior and the soldier, which instilled pride in so many First Nations people across the country. That same potential is here. This time, there are thousands more people from all First Nations willing to put their faces on history. The interesting question will be who else joins in.

I love everything about this new movement. I love the way the First Nations, the most oppressed people in the country, are now leading the struggle against the Con regime.

Trying to stop it from defiling our land, or poisoning its lakes and rivers. Refusing to surrender. In a country where so many surrender so easily.

I love the way Chief Theresa Spence is putting her life on the line for her people. 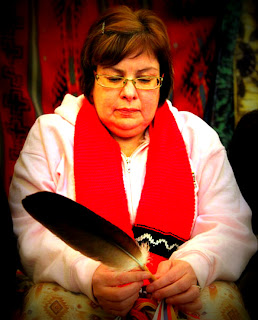 In a country where so many people are so apathetic, they don't even bother to vote.

And I absolutely love the way the Idle No More movement is using social media to make the voices of native youth heard by a larger audience.

Helping to organize their protests, and unleash their creativity 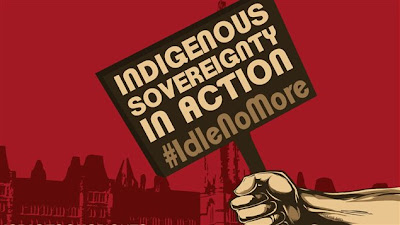 Just like the Occupy kids tried to do before they were crushed. 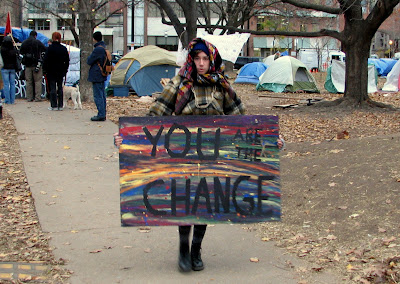 Or the young in Quebec did and won. 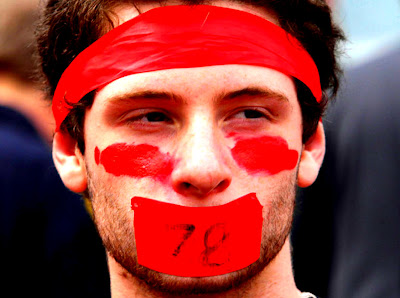 For it is all the same struggle.

Which is why I will march with the Idle No More movement like I marched with the others. Because I firmly believe that only by creating a mass movement of resistance can we hope to change the world.

And stop the Harper Cons from destroying our country. 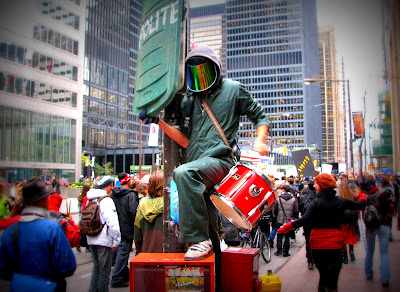 Once I marched to the sound of his drum.

Now I march to the sound of other drums.

And isn't it GLORIOUS?

Down with the Con regime.

How pathetic . . .
A nation of people that we (whites, et al) butchered almost to the point of extinction may now inadvertently, because of their own desperate needs, save us from our own unforgivable stupidity in trying to save themselves from further obliteration. If I was really to believe in karma, we, as a race, owe some serious shit to the universe. And to all of the harpo and ford and flabberty "right-white" supporters who think they have some kind of snappy one-line comeback for my comments, I wish them the eternal bikers' seasons greetings in the old adage; "fuck you, you fucking fucks!"
Merry Christmas and Happy New Year, Simon. God help us, every one.

"Supporters of the 18 Idle No More rallies staged throughout the continent say their resistance to the Harper Government is just beginning."

This movement is so heartening.

Smug sen. Patrick Brazeau claimed he had no idea what these FN rallies were all about. Until the media started covering this and giving Canadians an opportunity to hear these voices, many CON supporters I know assumed they were protesting the accountability legislation because the CON default position is to paint FNs as corrupt and idle.

My MP, Bob Zimmer thinks the government has been more than generous to FN people. Riiiight. He and his party need to listen and learn. I was honoured to participate in our local event yesterday and to stand as an ally with my FN brothers and sisters. It is awesome to see some great young leadership coming out to lead this movement.

hi anonymous...yes it pathetic isn't it? That the First Nations should have to save us after everything we have done to them. But I also find it inspiring and entirely appropriate. For in my book it is written the last shall be first, and lead us to the Promised Land. And although we live in desperate times, I take that to mean that things can only get better. Merry Christmas and Happy New Year !!!!

hi Beijing...yes it is heartening to see that the flame of resistance still burns in this forsaken land. As I said in my post it has made my spirit soar. If not like an eagle, at least like a pigeon eh ;) For I am sooooo weary of the horror of Harperland. As for Senator Brazeau, if he doesn't know what the rallies are about he must be even dumber than I thought. But luckily for us, for every Brazeau, there are a thousand great FN people, and I am with them all the way...

hi peacesocial worker...Gawd. No wonder Zimmer rhymes with dimmer. For any dimmer than that and we would be in total darkness. ;)
But yes, isn't it great to see a new generation of aboriginal people standing up for their rights, and trying to stop the Cons from destroying our country.
Let's hope that you and I are just two of a million allies who will join them...

hi anonymous...thanks for the video link, and yes Montreal rising, and hopefully soon Canada too...