The Cons and the War on Christmas 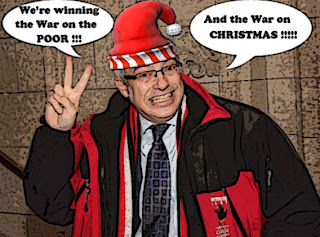 Oh my Ding Dong. Deck the gazebo with boughs of holly.

Or steaming mounds of horse shit.

Tony Clement, the King of Muskoka and the Minister of Misery, wants us all to know something REALLY important.

He's no grinch, and the Cons don't hate Christmas.

With Hanukkah underway and just over two weeks to go until Christmas, Clement launched a pre-emptive strike against "those who would like to snuff out the holiday spirit in the name of political correctness or expediency." "Our Government will not allow the Christmas spirit to be grinched," said Clement in a press release issued on the Treasury Board web site on Sunday.

Because he loves his employees eh? He wants them to celebrate in their little cubicles, happy and muzzled. Even as he boasts about how many of them he fired.

But then Clement is only honouring an annual Con tradition. Pandering to their rabid  teabagger base, who along with all their other hallucinations believe that the ungodly have declared War on Christmas.

For who could forget the ghastly spectacle of Diane Finley? Rising in the House of Commons to declare that "We like Christmas."

As if others didn't.

As if she wasn't just another Con Minister of Mass Misery... Squeezing the joy of Christmas out of the unemployed, making it harder to get benefits, turning us into a low-wage economy, where the rich get richer, and the poor can eat a can of Diane Finley beans.

"Although this is of course a fictional marketing effort, the precarious situation of unemployed workers in Atlantic Canada, as in the rest of the country, is unfortunately real. Many of these people won't have much more than beans to feed their children this winter due to the Conservative cuts to the Employment Insurance program..."

Golly. If she's the Spirit of Christmas the Grinch is Gandhi.

And finally, who can forget that the Cons are just taking their cues from the rabid Christianists and RepubliCons in the United States like Bill O'Reilly?

Bill O’Reilly agreed with a Fox News guest Thursday night that it's not just "grouchy misanthropic heathen atheists" who hate Christmas, but those who promote gay rights and a woman's right to choose.

Because all things considered, from bigots to Jesus... 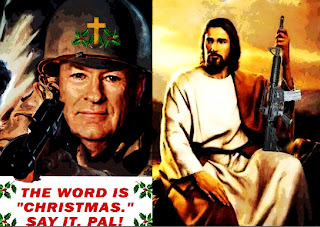 The Cons are more American than Canadian.

And what more can you say eh?

Except Happy Hannukah everybody !! Santa I love you !! Please bring me an I-Pad !!!!!

Or even better, a REAL Canadian government !!!

Down with the Cons who wouldn't recognize the true meaning of Christmas if it jumped up and bit them.

Down with the grinch who stole our country... 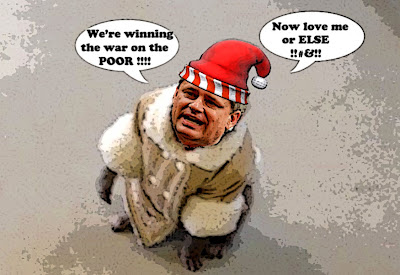 I Wished I worked in a Fed office, I'd whip together a collection of holly, knives,chalices and pentagrams that would have every born again taking stress leave.

This "War on Christmas" meme is definitely getting old fast. I mean, for the love of god (oops! I mean God), surely there are more important issues that need to be addressed. Yeesh.

I think Tony Clement could end up behind bars for fraud should the harpercons lose power.

Christmas is NOT Christian. The church stuck "Christ" on it so they could absorb all the heathens who were celebrating Mithras (who was born on Dec 25, had 12 disciples, born of a virgin, for some reason a bull is involved, worshipped by Romans, was referred to as Son of Light); and the heathens who were celebrating Winter Solstice on Dec 21, with roasting beasts, lighting bonfires, gathering greens like holly and fir to come into the house -- it's as Pagan as Easter (Ostara) is.

It must be horrible what these HARPER CON nuts see from their limo windows, hey? When they drive through gay, liberal, atheist Ottawa streets to get to work to screw Canada and Canadians. Yes there certainly is a 'WAR' on Christmas, especially when it is continually shoved down our throats from Halloween on! Somehow the 'war' on Christmas doesn't prevent about 60 days in a row of mass Christmas commercialism/consumerism! GOSH! There's JUST NOT ENOUGH fucken MERRY CHRISTMAS in my life!! I wonder if there is any nation on this Earth more consumed with Christmas than Canada, except maybe the religiously insane USA? I think the Latin nations are more into Easter if I recall. And as these CON HYPOCRITES like Tony Gazebo run around jabbering about 'those that would snuff out the Christmas spirit,' his Grinch government’s CUTTING of E.I. is forcing people to starve their children over the holidays! Keep Christ in Unemployment!! And it’s not enough to be a lucky CON hack politician with a feeling of entitlement! These goons have to roast their fucken chestnuts on the misery of those "irresponsible" people who want to bask in the warmth and luxury of an E.I cheque! If it ever shows up! And of course beneath this stinking pile of Harperland CON BULLSHIT is a ‘pro-Christian’ subtext!! Or, in other words, an anti-Muslim one! And anti-Buddhist, anti-aboriginal, anti-immigrant (and whatever they believe!) and anti EVERYTHING ... other than what Christian’s believe! Because Christians COME FIRST! In fact they GOT HERE FIRST to FUCK OVER the aboriginals ! So they feel entitled to FUCK THINGS UP unwarranted, unencumbered and unhindered, ALONE! And Harperland CONS' Jesus pals have to be defended from....secularism! And from all those socialist, gay, Muslim, atheist and UNIONIST subversives..out to STEAL Christmas! Of course the REAL instigators of the fake war on Christmas are ..social Conservatives! And the conservative politicians that frame it to keep its social conservative base SCARED and ANGRY that Jesus in the manger is under attack! Even though in REALITY, if Jesus CAME BACK TODAY wearing a robe, long hair, a dress and sandals preaching peace, love, caring, compassion, equity, brotherhood and tolerance - CONSERVATIVES would be chasing him down the street, tripping all over each other in their haste, carrying railroad spikes and looking for a good big fucken tree to nail the hippie commie to! The Con fake 'war on Christmas' is just another bone tossed to their social conservative base of nitwits, to keep them stupid, scared and paranoid... and easy to manipulate. How else do CONSERVATIVES get votes?? Besides election fraud, I mean???

Harper gives billions of our tax dollars to, corrupt greedy banks, mines, big business and his favorite charity, big oil. He also gives them huge tax reductions. Harper has been very generous with our tax dollars.

Our neighbor south of the border Obama...Has created a huge scandal. He is having big corporations actually, pay their fair share of taxes. Can you imagine the squealing at the trough, if big business and the wealthy, had to pay their taxes in Canada? OMG, never in a thousand years, would that ever happen.

One time, Harper even bought himself a gift?? A $1 billion dollar fake lake. Harper gave one riding, $50 million for gazebos. Harper won that riding, for his generosity. The list of Harper's generosity to himself is, three football fields long.

How much more generous can Harper get than, giving Canada away to a Communist country?

so pony tony thinks there is a war on Christmas. No there is a war on Canadians & pony tony is part of those waging war on Canadians. I do think the cons have forgotten the first word in Christmas is Christ. Christians celebrate Christmas to celebrate the birth of Christ. Now from that follows the teachings of Christ. that is the part pony tony & his con friends forgot, the teachings of Christ. We could start with the 10 commandments. Perhaps Vic could remember, though shalt not committ adultry. Perhaps the treasonass stephens could remember the story about Christ feeding the multitudes with bread and fish. Oh, then there is that commandment about, "thou shalt not steal". Stealing from the poor to give to the rich, not so Christian if some of these "christians" read their new testament. These cons don't believe in Christ, Christmas, or anything expect their own self gratification. Now lets get tony pony to go to something besides cry about the war on christmas. How about conducting a war on child poverty & homelessness in Canada because right now all I see is a war on children & the poor.

Maybe pony tony could remember that Christmas is actually part of a celebration which had more to do with the winter solstice than with the christian faith.

Christmas is the time of yr many Candians remember those less fortunate than themselves. pony tony & treasonass stephen might like to think of the 10K government workers they fired. they must be having a lovely time.