The Monkey King and the Koch Brothers 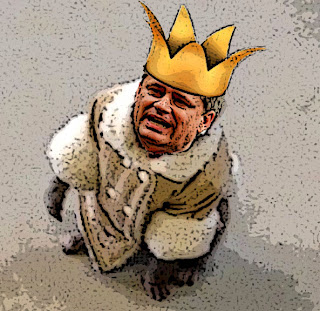 Sometimes in the court of the Monkey King it's hard to keep your eyes on the prize.

To lower your sight enough to understand his real role in Canadian history.

For while we all know he's now China's latest plaything.

Harper’s a bully at home, a wimp overseas. He happily torments environmentalists, refugee claimants, women, unions, public servants, you know, the locals. He ignores Parliament or prorogues it, and treats the Investment Canada Act — which states that foreign investment must benefit Canada — as a joke.

That’s his shtick and to be fair, it plays well, at least in the West. But when Harper the bully is faced with the biggest bully of them all, the power colossus that is China, he hands over our jewels, our natural resources. Here, have some bitumen, he tells China, and laughs weakly. 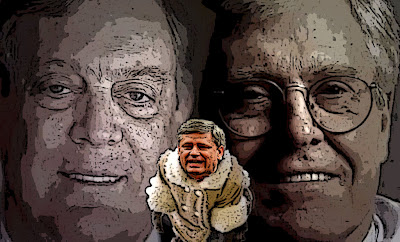 For what those sinister right-wing billionaires did to Michigan today.

As the Republicans launched the attack on unions and their members, Americans for Prosperity—a group developed and funded by right-wing industrialists and billionaire campaign donors Charles and David Koch—was in the thick of things. AFP recruited conservatives to show up at the state Capitol in Lansing to counter union protests and prepared materials supporting the Michigan initiative, including a fifteen-page booklet titled “Unions: The Good, the Bad and the Ugly: How forced unionization has harmed workers and Michigan.”

Stephen Harper and his RepubliCon teabaggers will start doing to Canada tomorrow.

For like the Koch brothers he also wants to weaken and destroy unions, so he can turn Canada into a low-wage economy, and Canadians into the slaves of foreign interests.

And all I can say is I don't do slave good eh? 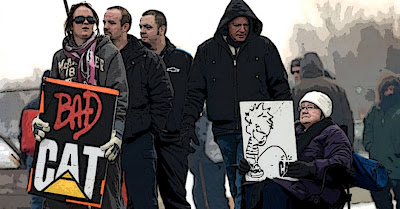 Because I know that without a strong union movement we will all end up living in a sinister, brutish society, where the only right consecrated by law is the right to work for less.

For in our corrupted economic system the only way the rich can get richer is by making the poor poorer.

But will Canadians see the larger ideological struggle beyond the antics of the Monkey King? Will they see through the veil of secrecy, and understand who is really pulling his strings? Or feeding him bananas.

I don't know. But they better. Because the billionaires are coming after our kind of  society, our kind of country, like an express train.

And so are their stooges... 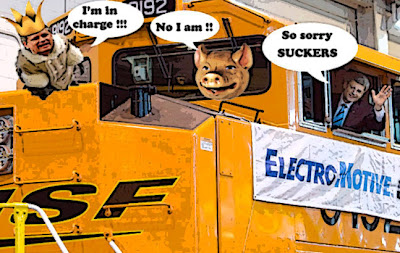 On their klown train to NOWHERE.

Yup. It really is time to derail and then dethrone the Monkey King.

Time for Canadians to unite to defeat the sellout Cons.

Time to decide which side they are on...

A lot of people know which side they are on, sadly for people like you Simon, it isn't yours.

Only idiots would vote for this, the race to the lowest wage. Internet right wing scribblers who will have THEIR pockets picked to feed the rich; only they are too fucken STUPID to know it. Michigan's governor just made Michigan a low wage haven; the kind of place that attracts chicken processors and burger flippers, not software engineers. Well done, Einstein. You know, jobs for $25K a year with no vacation. Right to work is ALL ABOUT (and nothing else) making a state able to 'compete' for LOW WAGE JOBS. So, educated Michiganders will take off by the truckload for CHICAGO. Gosh.

Koch & their crew are coming to Canada because progressives in the U.S.A. point to Canada as an example when social programs, health care, etc. work. They don't like that one bit. What do they do, they get their friend, treasonass stephen, to change things in Canada so Americans can't see it as a good example.

Unions are what made the middle class in western countries. Any country where unions are banned, repressed, & controlled by government are countries which have a poverty issue, for the majority of citizens, not for the rich, but the rest of the population.

its funny, the conservatives are so big on secrecy regarding their own finances & activities but hell, they want unions to post their books on line with a federal agency. sounds more & more like fascist government action to me.

For Harper to have only, the very wealthy and the very poor, Unions certainly have to go. Harper wants no middle class, what-so-ever. He has sold the tar sands to Red China. They are bringing their own cheap labor to work up there. Harper has permitted all company's, to hire cheap Chinese labor.

Now that Harper has given Canada over to Red China to rule. We will have to live on cheap Chinese labor pay. Canada has the highest cost of living in all of the America's. We won't be able to keep our homes nor vehicles. However, there will be swarms of Chinese taking over this country. There are absolutely billions of them. BC has already been lost to Communist China. Gordon Campbell is Harper's good buddy. He sold BC out to Red China long, long ago. There are up to 2,000 Chinese coming to take, the BC mining jobs.

Canadians won't be permitted the resource jobs. They go to cheap Chinese labor.

Yeah, that must be it? How many in software are even union members?

hi anonymous...actually the last time I looked I was on the side of the 70 percent, while you are with the 30 percent. Now go hail your Monkey King...

hi wazz...it's pathetic but a lot of people vote against their own interests, because the Cons use wedge issues and other shiny baubles to distract them from the real issues. However, as the ideological struggle becomes more marked and impossible to ignore, I'm pretty confident that will change...

hi e.a.f... you're absolutely right, our social programs and medicare system make them see red. They know that as long as our medicare system is alive it will serve as an inspiration to people in America, that a better way is possible. Which only inspires me to fight the Kochtopus even harder, for ourselves AND our neighbours...

hi anonymous...don't forget it's not just Chinese labour. The Harperites are bringing in foreign workers from all over the world. But wherever they come from the goal is the same, to drive down wages in this country, and turn us into a low wage economy....

The shit-head walked right into that one, didn't it Simon?