Why John Baird Should Be Fired 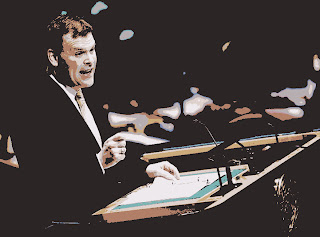 Three days ago he was the mouth that roared. Lecturing U.N. delegates like some crazed televangelist, as if they were children.

Blasting the Palestinians for daring to ask for  humble observer status, claiming it was an "impediment to peace."

But today after Israel delivered what the gentle Ban-Ki-moon described as an "almost fatal blow" to the peace process, John Baird was strangely subdued.

Refusing to condemn the Netanyahu settler regime, and further isolating and shaming Canada..

Canada stood apart Monday from some major allies, the U.S. included, in refusing to condemn Israeli plans for new settlements in areas claimed by the Palestinians.

The United States, which joined with Canada, Israel and six other countries in opposing the Palestinian move at the UN, broke ranks Monday to directly criticize Israel. The White House and State Department said the Israeli announcement would hinder the resumption of peace talks.

But then how could Baird condemn Benny and his gang when it would be tantamount to condemning himself ? Or like a faithful chihuahua, biting himself in the butt.

Especially since, as I pointed out last night, our Foreign Minister is so giddy with the thought of Greater Israel he dreams of working on a kibbutz.

While the voting pattern is not new, the Harper government has certainly cranked up the rhetoric, particularly under the current foreign minister, John Baird, who presents himself as far more of a sycophant than a statesman.

Earlier this year, the Jerusalem Post led its coverage of Baird's visit to Israel with an anecdote from a magazine interview with the foreign minister. "If you weren't in politics, what would you want to be doing?" "Likely working on a kibbutz in Israel," answered Baird. 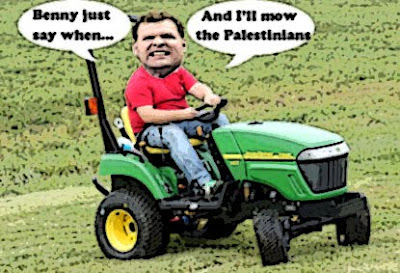 You know last night the idea of the Con nerd from Nepean working on a kibbutz struck me as funny. But after the way he is reacting to this mortal threat to the peace process, I think it's just another good reason he should resign.

For not only has he made an absolute clown of himself, and made his department look like a branch plant of the Israeli Foreign Ministry. He has eliminated any influence we might have had on events in the Middle East, the world's most dangerous neighbourhood.

And for that alone he should be fired.

But of course he won't be dismissed, because his deranged leader is even more of a Likud stooge than he is. If that's possible. Huh?

So the shame will go on and on.

Welcome to our freak show... 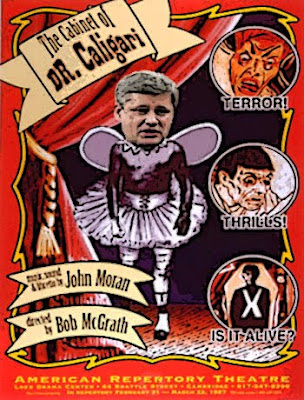 Dance for me Johnny...

I really don't care what Baird says. It's what the Libs and NDP aren't saying about this that should trouble us all. Their silence is deafening and it speaks volumes.

There needs to be peace or something like it in the region. Setting up new housing, settlements, in areas where Arabs are living & forcing them to leave is no way to get there.

Biard & Harper are a couple of idiots. Giving the Palestinians observer status at the U.N. does not take away from Israel's right to exsist.

I don't know if there ever will be peace between the Arabs & Israelis but abusing the Arabs who live in Israel & the Gaza is doing nothing to improve the lives of anyone.

Mound of sound is correct, I am also troubled by the lack of position on the issue by the NDP & federal Liberals.

I agree with Mound, where the heck is the opposition, a golden opportunity awaits them to change the friggin' message.

You're right MoS. All of our political class panders to this racist nonsense.

Elizabeth May was the only politician, that called Harper on his Treason, selling us out to Communist China. The other politicians and party's were, useless, gutless wonders who, said and did squat. Even at the atrocity of, China suing any Canadian, that blocks China's intrusion into Canada. Elizabeth May did. And, that said it all, right then and there.

So no, I am not surprised at the Liberals and NDP, saying absolutely nothing, about the crisis in Israel and the Arabs. They have done nothing, about nothing, that any of us can see. It pisses me off, we are even paying their salary's and gold plated pensions. Why are we surprised, at the other ranting raving, Harper henchman Baird? He is no different than Harper's other, name calling Cons. All of them , throw tantrums and pitch hissy fits, when they don't get their own way, and that includes Harper. Other country's have renowned Harper, for his hissy fits and sulks, when he doesn't get his own way.

As Canadian citizens, we are D.P's in our own country. We don't even have the rights to jobs, in our own damned country. We know we can't count on the opposition, to get rid of Harper. As this country has never had anyone, as corrupt and evil as Harper? What are the people's options? Armed rebellion or what?

Used to be the Americans wanted to be known as Canadians when outside the US. Since Harper, we now want to be known as Americans ...... a sad reflection of The Right Wing Agenda in this country! Every day when I read the news I think that nothing could be worse than the day before but EVERY F%$#&^G it is!

Who says they actually disagree with them......did you consider that?

So revolution is the answer, right Thwap? LOL

hi Mound...well I do care what Baird says because his capacity to harm people remains intact. But you're right, the Liberals and the NDP should be making more of a fuss. I suppose they're afraid of losing the Jewish vote. Funny thing though I have tons of Jewish friends and acquaintances NONE of them support the Netanyahu regime. And those who don't speak out are not helping either side...

hi e.a.f...I believe there can be peace, if the world puts pressure on both sides to negotiate. I've seen old hatreds dissolve in the mists of time, in places like Northern Ireland. Where there is a will there is a way, and really they have no choice for they can't keep living that way, and the rest of the world is fed up with that neverending conflict. Canada should use its influence to promote understanding not division, and the Cons should be ashamed of themselves...

hi bcwaterboy... Although I didn't see it, I'm told it did come up in Question Period. But yes the opposition should not be afraid to stand up for what is right, especially since polls show most Canadians are not supporters of Israel's policies in the occupied territories...

hi anonymous...no we don't need an armed rebellion, we need to peacefully organize, for as I always say to anybody who will listen to me, we are more than them. And the day we join forces the Cons don't stand a chance...

hi Sue...you are so right, isn't it depressing and infuriating. Once the red maple leaf was something you put on your backpack or your windshield to protect you in foreign places. Now thanks to the Harper Cons you leave it at home, lest it make you a target. But don't worry, it is a nightmare right now, but if we get our act together it will be over soon...

Yep, cus they are licking you good right now. Unity among you lot? Fat chance of that.

Stick your heads back up your asses. Idiots.