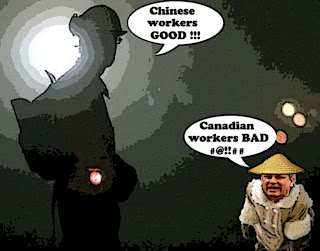 Where if you're Canadian we don't want you.

The B.C. Federation of Labour says documents show it will be 14 years before Canadians replace all the temporary foreign workers from China hired to work at an underground coal mine in northern B.C.

Documents tendered in the case include HD Mining's previously unreleased transition plan, which outlines how the company won't start hiring Canadian miners for more than four years and plans to continue using temporary foreign workers for the next 14 years.

Golly. Who knew we were too dumb to work underground, or that it would take so long to train us? Duh. Who do they think we are Canadians or squirrels? Because give me fourteen years and I could train mine to drive a tiny car.

Or should I say who knew the Cons were such sellouts, that they would betray and humiliate their own people?

The Chinese miners, brought in under a temporary work permit approved by Human Resources and Skills Development Canada, are being paid about $10 less per hour than the going rate in Canada for these jobs, the unions say.

Because that's what it's all about isn't it? Bringing in foreign workers, busting unions, making it almost impossible to collect EI benefits. So they can turn Canada into a low wage economy. And Canadians into slaves of foreign interests.

And of course this is bullshit. Because nobody is blaming the ordinary Chinese miners. Just their powerful bosses who are discriminating against Canadian workers in their own country. And depriving them of badly needed jobs.

Oh well. At least we know what the choice is going to be in the next election.

Will you stand up for Canadians workers?

Or will you just BEAT IT?

Nice song eh? But I think I'd rather beat the Cons. Duh.

Are we Canadians or squirrels? Keep your peanut Boss Man. But give Boss Harper two.

Canadians will not be slaves in their own land.

And the sellout Cons will be defeated...

Ex BC Liberal Premier Gordon Campbell who still works for Harper, sold BC's resources and resource jobs, out to Red China long ago.

During Campbell's reign of terror in BC, China was already sending their people to school, to learn 100 English words, so they could take the BC mining jobs. BC is an English speaking province. However, if you don't speak Chinese Mandarin, you don't get any resource jobs in BC. And, eventually not at the tar pits either.

Harper and Campbell's plot to sell out to Red China began years ago. CSIS even warned, Communist China was making huge inroads into Canada. BC was specifically mentioned. Campbell had already given China our mines and shipped BC mills to Red China, along with their raw logs.

BC citizens yelled and hollered, watch out for Harper and Campbell's treachery, a very, very long time ago. The dastardly duo, also forced the illegal HST onto BC as well. Do people not remember Campbell's dirty tactics? Harper was drooling at the mouth, for BC's HST. That tax was illegally forced onto BC.

People just refused to listen to BC. You are only seeing this now? Harper and Campbell signed, many sneak deals behind our backs. BC even posted, one sneak deal was, Harper can force the Enbridge pipeline into BC.

The list of Harper and Campbell's treachery, is a mile long. BC has been thieved, sold and now belongs to Red China. Christy Clark also works for Harper, as Campbell did before her.

Everyone has the will, to do good or evil. Harper chose evil. He cheated to win the election. Then sold Canada to Communist China. Harper gave Red China the greatest x-mas gift of all. Canada on a silver platter. We must keep Canada intact. Harper wants to give every province to Red China....In one huge wealthy package.

Hi Simon. The Cons are so transparent we see right through them and as you say their agenda is to create a large pool of cheap labour so desperate for any type of work they'll be easily exploited.
For now they need foreign workers for this pool but as planned they soon won't have to import workers for corps to exploit there will be a readily accessible domestic supply

The news out here is reporting one of the "temporary" Chinese miners has filed a Human Rights complaint against the United Steel workers. The company he works has stated it will be suing the federal government over comments made about the company.

Are we hving fun yet? Yes old treasonass stephen has opened the flood gates & now the law suits will start. It will cost Canada a fortune.

the documents obtained by the unions reflect the mining company would not have a full complement of Candian workers for about 14 yrs. By that time, the mining company will have opened mines in other parts of the world & will pull out of Canada. They will have made their money, ruined our enviornment, & be off to the next country.

FYI The average lifespan of a mine is approx.10 years The only jobs left for Canadians will be cleaning up the toxic mess left behind.

Too bad they don't speak mandarin: