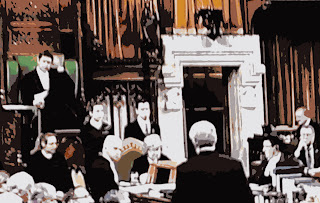 Holy Mayan prophesy. I think I now know how the Con regime is going to end eh?

Not with a bang but a whimper. With acts of sheer folly, and howls of laughter.

For there was Stephen Harper today, in the Con circus that was once our Parliament, accusing the NDP of being a "gong show."

While some of his rednecks hollered "don't get angry Tom, have another drink." Even the Con Speaker was shocked.

Harper referred to the NDP line of questioning Wednesday as "The Gong Show" and called Mulcair a "pretender" for trying to be a friend of Alberta.

And the real gong show was this debacle. 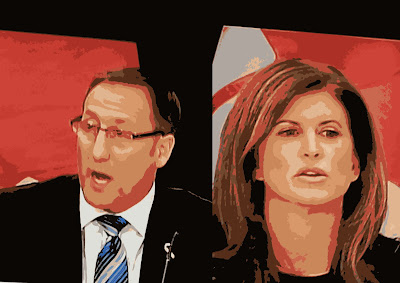 Peter and Rona in the As the World Turns or Comes Crashing Down On Us show.

Where Dumbo MacKay in a desperate attempt to escape the death dive of the stealth dollar gobbler, lunged for the patriot card instead of the ejection button.

He might have made it easier to hear his answers without wincing had he just admitted to past mistakes. Failing that mature, obvious response, he might have clung to a fragment of dignity by resolving at least not to drag Canadian men and women in uniform into it.

But no. He couldn’t restrain himself. He couldn’t resist bringing up his concern for the troops when pointedly asked if he had any regrets about his past harsh words toward critics who raised what turned out to be entirely valid concerns about the F-35 program.

While Rona Ambrose, behind whose skirts hot pants MacKay has been hiding, claimed you can just press the "reset button." Even when you can't. Not when the flying turkey that the Cons still clearly want so much, could become even more expensive.

If one of the nine nations committed to the oft-maligned program reduces or cancels its orders, the price goes up for everyone else. With Washington poised to slash defence spending, either voluntarily or by the force of a congressional deadline, there is the real possibility the U.S. could dramatically reduce the number of F-35s it intends to buy from the current 2,243.

And the bottom line is the Cons were caught trying to conceal the inconvenient truth, and/or cook the books, and they are going to be wearing this debacle all the way to the next election.

Which is no doubt why Harper has been looking and sounding like he's losing his mind eh?

Although this couldn't have helped.

Abacus found 34% of those surveyed support the Conservatives. That's down two percentage points since Abacus' last survey in November and is down from 40% a year ago. The Conservatives have not been that low in the polls since November 2010, when 33% of voters were on their side.

The Monkey King is cracking up.

And the Cons are going down... 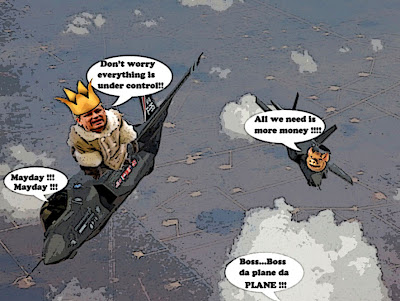 We know our system is broken when someone so brazenly incompetent as Peter McKay keeps his job. What an extremely embarrassing spectacle our "democracy" has become.

34% support these fucking imbeciles? That's an indicator of either colossal moral failure (exhibited by some of your trolls here) and/or media failure.

When corporate media scum like the Glib n' Stale's editorial board endorse this lying, incompetent, anti-Parliament gang of thugs, it makes the ignorant think that they're a valid political choice.

Hold on to that Simon, hold on. The F-35 was a mess, but that won't bring down the CPC. Do you really think the Libs and the NDP would do better?

The Lib would try and have it built in Quebec, for 10x the costs by workers who don't know what they are doing.

The NDP would say that world peace was about to break-out and when it didn't, would go cry over pictures of Layton or some other lefty bullshit like that.

Harper said. He was going to share the High Arctic, with Russia and Communist China. We need a military for what?? We no longer need fighter jets nor icebreaker ships up there. Russia has plenty of war machines. Russia has fighter jets, battleships and icebreaker ships, amassed in their far north. Perhaps even nuclear subs under the ice. Harper and MacKay were going to establish, military bases around the globe. What happened to that?

Canada is deeply in debt. Harper's x-mas gift to Communist China is, Canada on a silver platter. PLUS, Canada's resources and the resource jobs.

There is no longer any reason, for a Canadian military. This country is no longer ours. Canadian citizen's, have no say over anything. Harper gave Red China permission to sue any Canadians who, block Communist China's takeover of our country.

Ex BC Liberal Premier Gordon Campbell works for Harper. Campbell thieved and sold BC's resources, and the resource jobs, to China too. Both Harper and Campbell worked on their plot of, China's takeover of Canada long ago. People refused to listen to the BC people and CSIS.

What a shit for brains you are.

Anonymous, of course we still require icebreakers in our North. They help in the supply of some of our most northerly communities.....unless of course you're one of those who think the Inuit should take up farming.

As for our military of course we need one. How we use it is what is important. There are in fact many things our military does well and it can and should play an important role in the world. Now, relax. I'm not saying we need to go all crazy with fighter jets we clearly don't need or flex military muscle for the sake of flexing military muscle like the Americans. But things like, supply, logistics, medical and other support roles....we do those well. or at least there were times in the past when we did. Kindly don't shit on our military personnel. The current government has done enough of that. We have plenty of men and women that have sacrificed so much and lost out on time with family and friends to proudly wear our country's uniform.

absolutely you anonymous should remain that way you are an idiot