Stephen Harper and the Newtown Massacre 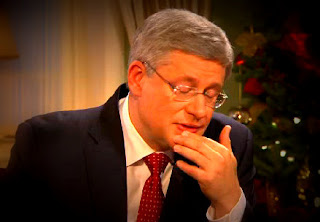 Well I see that the camera caught Stephen Harper in an unusually tender moment.

Claiming that he had to turn off the TV when the sights and sounds of the Newtown Massacre became too much to bear.

“I think once you’ve been a father, you’re affected by the deaths of children in a much more profound way than other people. It’s hard for me to talk about it,” he said in a one-on-one interview with Global National anchor Dawna Friesen.

“It’s hard for me to imagine how anybody can be so deranged, so angry, so troubled that they would do such a thing. It’s really beyond our comprehension.”

Which was all very moving eh? If it wasn't so phony. Or so deranged.

Or so gun lobby. Guns good, people evil. Or so beyond comprehension.

For what kind of Prime Minister would turn away from the horror of that American tragedy, without talking about gun control, or trying to make his own country SAFER?

By banning assault weapons like this AR-15 or so called Bushmaster...

Which although it was used to kill so many people in Newtown, so quickly and so easily, is still available in Canada.

Along with so many other weapons of mass destruction that have claimed so many Canadian lives.

In the 1989 massacre of 14 women at the Ecole Polytechnique in Montreal, Marc Lepine used a Ruger Mini-14 rifle, at the time equipped with a substantial magazine. And in 2006, Kimveer Gill used a Beretta Cx4 Storm to shoot 72 rounds at Montreal’s Dawson College, injuring 16 and killing student Anastasia DeSousa. 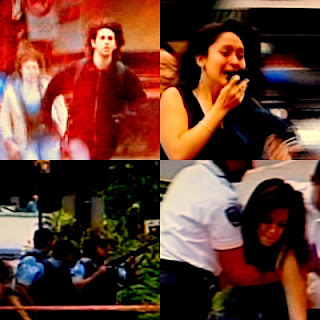 Neither the Ruger Mini-14 nor the Beretta Cx4 Storm are prohibited in Canada, despite the outcry from victims and their families, the occasional political grumble, and a pointed coroner’s report in Montreal.

So now that Obama has apparently found the courage to do the right thing.

Will Harper do the right thing and ban assault and rapid firing semi-automatic weapons?

Like they did in Australia, with such great results.

Not a chance. For there is NOTHING he won't do to pleasure the gun lobby, or use the issue of gun control as a wedge issue to keep himself in power. Instead of keeping Canadians safer.

Which makes me wonder, if it's true that Great Dad Leader just couldn't watch the agony of Newtown, was it because that cold, cruel, man couldn't stand the pain of others? When it's never bothered him before.

Or was it because he couldn't help thinking what might happen to HIM, if another bloodbath happened here with a gun he didn't ban?

Even after this horror? 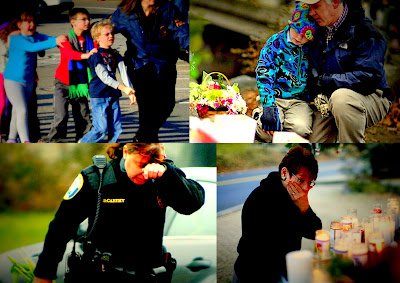 And after everything he has done to destroy gun control in Canada.

Oh boy. No wonder Stephen Harper is leaning on religion, like a drunk leans against a lamp post.

For he is playing politics with the lives of his own people, and Russian Roulette with his own career.

For one thing is for sure eh? If Jebesus forbid another gun massacre happens here, the burning anger of Canadians will be something to behold.

Great Bushmaster Leader and his Cons will be driven from power FOREVER.

And only his Godzilla will console him...

Harper is a sociopath and therefore cannot feel real emotion, but he can fake it.

Harper cares about Harper, and the votes he can get in order to remain in power so as to please his necro-corporate bosses.

Anonymous is exactly right about harper.

harper heard that children were being raped in Afghanistan and his first instinct was to cover it up.

he has no morality whatsoever.

I would dearly love to hear from the gun lobby exactly what is the purpose of having this type of firearm legal and available in this country. I've seen first hand what kind of damage the type of round this weapon uses causes when it hits a caribou or a seal so I can all well too imagine the hellish nightmare those poor people saw. I'm sure Harper will get right on some sensible gun control. Ya, like that will bloody happen. It's not like his own children will ever come face to face with something akin to Newtown.

No responsible gun owner I know has any use for this type of firearm. Weapons like this one serve no purpose other than to kill and maim people. Period.

This nonsense argument about how society would be safer if everyone was simply armed is just plain bizarre. Sadly, I read that some idiots actually believe in this crap. Honest to Christ, these people need to give their head a shake.....perhaps a full 360 rotation would be better.

hi anonymous...he's also a hypocrite. Because never forget that he was for gun control, before he changed his mind for purely political reasons. Any leader who puts his ideology before the real needs of people, is in my opinion unfit to hold office...

hi Way Way Up...I completely agree with you, the gun lobby should explain why people need such a weapon. As you point out it can cause horrible wounds, and I can only imagine what the scene must have been like when the firs responders, my heroes, entered the school. I'm almost ready to say that I would be willing to live without the registry as long as we can ban those kind of weapons. But sadly it's the most popular weapon in the U.S. so it's going to be an uphill struggle...

I have a question. What KIND of person who after 20 six year old’s are killed by an AR15 assault rife using half a dozen 30 round clip magazines, not only immediately runs to a gun store to buy as many AR15s and 30 clips as they can, but wait for the media to come by so they can brag about it? What KIND of a person is that? This is the Tea Party. These are the Fox News Christians. And Harperland LISTENS TO THEM.