Mulcair and the Attack of the Con Hogs 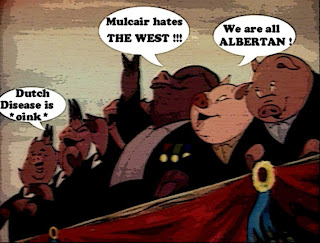 Well I see the Big Oil Cons have finally released their attack hogs.

The Harper Conservatives have finally unleashed the attack dogs on Tom Mulcair. They've pounced on the newly minted NDP leader's musings about the economic impact of Alberta's oilsands to paint him as a divisive, ill-informed, irresponsible enemy of western Canada who is unfit to govern.

And that in the absence of  Great Napoleon Leader, James Moore led the charge, with this humungous hog fart.

"I am wondering when the leader of the Opposition will apologize to western Canadians for suggesting the strength of the western Canadian economy is a disease on Canada," Moore told the House of Commons.

"He attacks western Canada, he attacks our energy industry, he attacks all of the West and the great work that is being done by western Canadians to contribute to Canada's national unity. He should be ashamed of himself," he thundered.

And all I can say after that hogly emission is this:

(1) Attacking the oil pimps in Alberta and Saskatchewan does not amount to attacking the West. British Columbia has been almost as badly hurt by the Dutch Disease as has Central Canada. And Manitoba is not a petro-state either.

(2) The Dutch Disease is a fact not an opinion. And when it's deliberately wielded like a blunt weapon by the Cons to enrich two provinces at the expense of the others, it's a crime against Canada.

(3) Going after Big Oil for polluting the planet and forcing future generations to pick up the tab is the right and decent thing to do. And attacking the Cons for selling us out to foreign interests is the sacred duty of every Canadian.

(4) No AlbertaCon should ever accuse others of threatening national unity, when they are doing the most to damage it. Living it up like hogs, while destroying jobs all over the country. Stealing the food off our tables. Raping the future of our children

Not when Stephen Harper once called for the province to build a Great Firewall of Alberta. Not when Albertans are always calling for Quebec to be expelled from Canada, or badmouthing other Canadians.

“Quebec has no interest in playing in the Canadian sandbox,” wrote Brian Purdy of Calgary. “There is a growing resentment in Alberta toward sending what amounts to $14,000 per family, every year, to other Canadians, mainly Quebecers. Canada without Quebec will finally be able to be a nation with national ideals and goals.

(5) Bob Rae must still believe that by pretending to love the tar sands the Liberals can win the next election by winning more seats in Alberta:

Rae said Mulcair's "abstract economic theory" that resource development is to blame for the high dollar is "absurd" and questioned his political smarts in sticking to it so vigorously. "When you're deep in a hole like Mr. Mulcair is, the first thing you do is stop digging. Instead of which, he just kept on digging deeper and deeper." 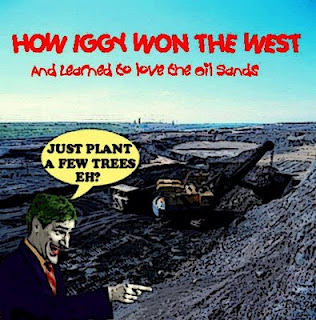 And you know how that one turned out eh?

(6) If the Cons and other Big Oil stooges think Tom Mulcair is going to be a pushover they're in for a rude awakening:

Mulcair later said the Tories had better think again if they think they can roll over him the way they did Dion and Ignatieff.

"As you can see as usual, when there is a substantive debate, all they can do is scream and try to bully you down. They've picked the wrong guy if they think they're going to bully me."

Which at this critical point in our history is all that counts eh?

Because what Mulcair's critics seem to forget is that the Con regime is hated like no other government in Canadian history. And that by attacking that regime and its Calgary-based leader like no opposition leader has before, Mulcair is drawing that anti-Harper vote to him like a magnet.

The New Democrats (36%) have moved into a narrow national lead over the Conservatives (32%). Liberals trail with 19 percent. Green support stand at seven percent support and the BQ has six percent (25% in Quebec).

Mulcair doesn't need to win any seats in Alberta or Saskatchewan, just more seats in Ontario. And as his numbers increase, and the Liberals go nowhere, he is positioning himself as the ONLY person who can defeat the Cons, and that can only make him even MORE popular.

As for the greedy oil pimps who are waging economic war on other Canadians, while making it sound like they are the victims.

May I suggest they go suck on a Chiquita banana.

Or wear this nifty hat...

Because, as they say in cowboy, the new sheriff just rode into town.

And this bad guy is going DOWN... 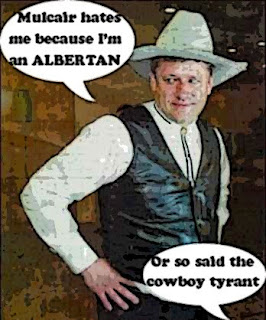 Tactically, the NDP can win with Quebec, Ontario and possibly gains in BC. However, the notion that you mute any and all criticism of the oil and gas industry to win votes in "The West" is downright absurd. And like you said, those that oppose Harper will see that the NDP is the party for them while Liberals continue to be Conservative-light and positioning themselves, yet again, into political irrelevancy.

Not much of a Liberal Renewal.

Canada has become a cesspool of corruption, because of Harper, more corrupt since Harper's so called majority.

If Harper being P.M. in England, he would be in prison. Politicians in Britain, are not permitted to, lie, deceive and cheat the citizens. They go to prison. Even two Lords from the House of Lords did time, for doing exactly what Harper is doing. If you can believe this!!! An American politician Robert Ehrich, was sentenced for robo-calls.

BC citizens were posting regarding, the robo-calls right after the election fraud. However, no-one listened. An American web site called presscore, had a lot of information on Harper's election fraud. They said, Harper's election win was rigged. If you read: Harper gives a speech in New York, at the Council of Foreign Relations. This was Sept 25/2007. That's the evil agenda.

Another American web site, end of the American dream...is very interesting as well.

I was more than hesitant about Mulcair as NDP leader, but have since gotten on board. His fiery manner and confident swagger and verve is a hit with me and it certainly makes Bob Rae look and sound tired and increasingly irrelevant. Plus listening to the media pundits and western premiers crying foul over his economic statements means he is saying things Canadians on the whole are receptive to. The more I'm fed their bullshit about how he isn't ready for prime time the more apt I am to believe he is. PM Mulcair in 2015? Not such a long shot any longer.

I have almost given up hope that the Libs have smartened up after being relegated to third party status. Mulcair is indeed coalescing the anti-Harper votes around the NDP. All the latter have to do is to keep reminding voters of all those times that Dion and Iggy voted with Harper to keep him in power.

Not smart for Rae, Dion, and Liberals like these: http://impolitical.blogspot.ca/search?updated-min=2012-01-01T00:00:00-05:00&updated-max=2013-01-01T00:00:00-05:00&max-results=50; http://farnwide.blogspot.ca/) to pile on Mulcair. It suggests the following: Liberal-Tory, same old story ... Besides, do they really believe that by taking the high road, they can ever win Alberta or Sask.? Thus it really does not matter what Redford or Wall say or do. Dion and Iggy both tried the high road and they succeeded in keeping Harper in power.

B.C. will most likely turn NDP in the next provincial election, and federally as well if the fight over the Gateway pipeline proceeds as expected. Clark will be gone, and not too soon.

To those of us who want this government gone, Mulcair is looking more and more like the guy to do it.

Sure, Mulcair may be able to win without the West....maybe. I would think he would try to be a bit more inclusive and understanding. I am however, encourage he (finally) decided to plan a visit here.

Hey check this out, apparently the Tories are excoriating Mulcair for taking a position that they themselves are also entertaining: http://www.theglobeandmail.com/news/politics/harper-government-funded-study-arguing-canada-suffers-from-dutch-disease/article2437617/

Don't even mention the words, Conservatives nor Liberals in BC. The citizens of BC, have been victimized by both, Harper and his Conservatives, and the Campbell/Clark BC Liberals. The BC Conservatives support Harper's insane Enbridge pipeline. BC has been under siege for, twelve long, dreary years.

BC will go NDP. Mulcair doesn't have to worry about this western province.

hi Michel...I agree with everything you say. Criticizing the way a resource is being managed does not amount to an attack on "The West." It's time Canada faced up to the reality of what an unbalanced petro-economy can do to the country. And as for the Liberals, siding with the Cons on this issue, which is also an environmental one, makes absolutely no sense. And just another sign that party has lost its way...

hi anonymous...I have practically memorized Harper's famous speech, and it's just one more reason I wouldn't trust him and his sellout Cons as far as I can spit...

hi Steve...I always had high hopes for Mulcair ever since I saw him regularly eviscerate the PQ in the National Assembly. And so far he has not disappointed me. It's a joy to watch him go after Harper during Question Period. His tightly controlled anger is something to behold, as is the fact that his questions are all really good. I remember feeling a little disappointed when he refused to even mention the Oda OJ scandal, as most other opposition leaders would have done. But chose another series of questions that went straight for the jugular. Whatever else one might say about him, Mulcair is deadly serious about getting rid of the Harper regime. And if he has to shake things up a bit to do that so much the better...

hi anonymous...judging by the polls Mulcair must be doing something right. And the way the Liberals are reacting seems rather cheap to me. When they're not hoping that the Cons launch attack ads against him, they're calling Dutch Disease an "abstract theory" and looking like fools. I don't know what they are thinking, but that tack won't help them. If the NDP can firm up that support, when election time comes every person who seriously wants to defeat the Harper regime will rally around them. For allowing Harper to win another election is simply unthinkable...

hi Way Way Up...while it's true that Mulcair can win without the West (Alberta and Saskatchewan) I don't believe he wants to do that. He is simply pointing out that the way the resource is being managed is damaging our manufacturing industry even in places like Alberta. Norway and other petro economies managed to harness their resource, and invest the money it makes, so every Norwegian comes out a winner, and the same thing could happen here. Alberta would still be the richest province, but other provinces wouldn't be so poor.
It is possible to have a win/win situation, but you have to have an opern mind and the political will...

hi anonymous...yes I saw that, and I'm enjoying every minute. Although I'm sure the Con who thought it was a good idea to commission the study has been forced to change his or her name and is now in exile in Paraguay... ;)

hi meadowlark...I'm hoping that the Enbridge pipeline, which should be under construction when the next election arrives, will drive even more people in BC to support the NDP as the only way to get rid of the despicable regime. So I'm glad to hear that I don't have to worry. You deliver BC and I'll deliver Quebec... ;)