Peter MacKay and the Libyan Fiasco 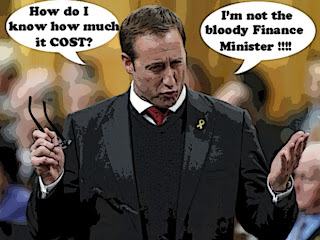 Oh no.Try to keep this one confidential eh? Because if the Russians find out, they'll invade us tomorrow.

But it seems that Peter Dumbo MacKay, our Minister of War, is having trouble crunching massaging the numbers. Again.

OMG. First the Afghanistan debacle. Then the F-35 boondoggle. Now the Libyan fiasco. And here's the BEST part. Dumbo calls in the military to defend him, and they make him sound like a liar.

The military sent out a senior officer, Major-General Jonathan Vance, to defend the $50-million figure Mr. MacKay provided in October, saying those were the to-date costs compiled at the time, with bills still coming in. But Maj.-Gen. Vance later conceded that even then, the military expected the cost to rise to twice as much, $106-million, when all bills were counted. And Mr. MacKay knew it, too.

Can you believe that? So soon after lying to Parliament about the real cost of the F-35, so soon after cooking the books.

And on the SAME day the Cons were caught trying to fly another costly military purchase under the radar.

The same day Defence Minister Peter MacKay issued a flurry of seven press releases about minor renovations and the painting of buildings at military installations — worth thousands of dollars — the Conservative government quietly announced on an industry contracting website that it had awarded a German firm a $105-million contract for armoured vehicles.

Gawd. Those Cons are shameless. Spending  BILLIONS on the military, creating jobs for workers in other countries. Even as they are killing tens of thousands of jobs all over Canada, and slashing social programs and pensions.

And why do we need those fancy new armoured cars anyway? To invade Iran, keep Libya safe for Suncor? Or guard the dirty oil pipeline to the Pacific?

Oh boy. Somebody please fire Dumbo. And his boss, the sinister nerd with the Napoleon complex... 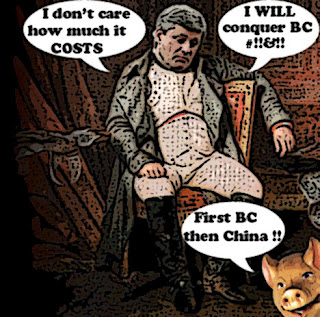 Before the Cons attack Iran, or the Chinese invade buy Canada. Or half the population of BC ends up in jail. Or we all end up so poor we can't afford medicare.

And in the meantime, don't worry people. It's NOT in your head. It's not a horrible hallucination. You're not losing your mind.

It really IS happening.

What about the sinkable ancient submarines, Harper bought from Britain? I believe one submariner, lost his life in one of them. They are no where near being sea worthy.

The asinine F-35 jets are a total boondoggle. Their fuel capacity is far too short, for a country as vast as Canada. With one engine, the jet goes down. Two engines, the pilot can still save the jet. Harper is going to start trouble with Russia, over the high Arctic. That's when Harper was called a petty gasbag. His posturing was the joke of the world.

ICC Chief Prosecutor, Luis Moreno-Ocampo, is serving Harper a summons for war crimes and crimes against humanity. Canada had no business, bombing innocent men, women and children in Libya. Can you believe, Harper thinks that is a honor? That's a disgrace and very shameful of Harper. But, that's Harper's twisted thinking. I hope Harper's "honor"? lands him in the Hague, for his trial. Hopefully MacKay will be tried as well.

The joke of the year...Harper the moron, is going to defend the far north from Russia. Our military, don't even have parka's or any Arctic gear. Yes, Harper and MacKay, are that stupid.

hi anonymous...it was the Liberals who bought the submarines, but you're right about the one-engined F-35. We'll need submarine to retrieve them when they go down over the Arctic. But then Harper doesn't care about that. He just needs shiny new military toys to make himself look like a Great Warrior, instead of a ridiculous nerd with a Napoleon or Stalin complex.
However I hope the ICC doesn't get hold of those Cons before the Canadian police do, because I definitely want to attend the trial. Preferably as a member of the jury... ;)

hi anonymous...I've written quite a few posts about Harper and his grand arctic plans. In fact the very first photo-shop I made had Harper as a beached seal on a Blubber Bubbah Tour of the north. And although it was REALLY bad, at least it was almost prophetic. Although even I could never have imagined that we wouldn't be able to defend the north because we didn't have enough parkas.OMG. Those Con klowns should be laughed out of office...

Heres a short video on Peter mckay and the F-35 I thought you might enjoy.