Andrew Coyne and the Quebec Students 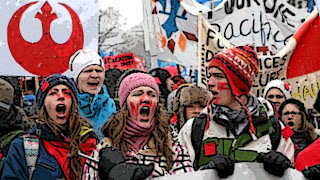 They staged massive peaceful demonstrations for twelve weeks, hundreds of them were arrested for no good reason.

Many of them were beaten and gassed. One of them lost an eye.

Despite the violence and the hatred directed at them they still managed to work out an honourable compromise, and only rejected it after being betrayed by Jean Charest's corrupt government.

Students said during weekend discussions their understanding was that everyone on this council would work to find money to reduce fees. But subsequent to the deal being signed, they said, government and university officials presented it as the onus being uniquely on students to find the money.

But still Andrew Coyne manages to work himself into such a foamy lather.

Even capitulation, Jean Charest found, was not enough. He’d stood by while striking students had blocked and intimidated others from attending classes. He’d done nothing while cars were torched and shop windows were smashed, while Paul Rose, the FLQ terrorist, was feted, while court orders were ignored...

And after the students pursued him there, after billiard balls and chunks of asphalt had been hurled at police, after one cop who’d been separated from the rest was beaten savagely — punched and kicked and whacked with sticks as he lay helpless on the ground — the very next day, while the tear gas hung in the air, he cut a deal.

I found myself wondering whether Quebec was still standing. And whether Coyne had to hire a squeegee kid to wipe all that demagogic foam off his face.

Because he could eh? He's the son of a one-time Bank of Canada Governor, and he was born with a silver spoon in his mouth.

So he could never understand what it's like to be a poor student, burdened by debt, unable to find a job in an economy where the youth unemployment rate is twice the national average. Or what it's like to face a bleak future in the kind of capitalist jungle Coyne wants us all to believe in.

You know, I'm worried. I fear Coyne is turning into some kind of holy roller preacher for primeval capitalism, and that one of these nights he's going to go on the excruciatingly boring Mansbridge panel, start screaming this kind of crazy bullshit:

Much has been made throughout this business of Quebec’s “progressive” traditions, or the government’s alleged intransigence, as if this could explain the decision of individual demonstrators (a minority, to be sure) to beat people up or attack their property. No. It is learned behaviour. They do it because, experience has taught them, it works. Not only does it invite the admiration of certain radical professors and sections of the media. It confers power. It frightens others into doing what you want.

And be carried off on a stretcher.

Because let's face it eh? Trying to portray the students as violent, or Gabriel Nadeau-Dubois as a wild-eyed, left-wing revolutionary...

Watching Gabriel Nadeau-Dubois, “spokesperson” for the most radical of the student groups, give a speech — a CBC crew followed him around — you can almost see the blood rush to his head. “Monsieur Charest!” he shrieks, one hand stabbing the air. “You are SURROUNDED! You have only ONE OPTION! BACK DOWN!” His eyes are ablaze. It is May 1968, and he is in France, leading a general strike. 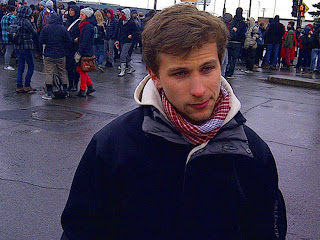 Because the student protests were overwhelmingly peaceful, and Nadeau-Dubois is so cool, he makes Coyne look like a wild-eyed right-wing fanatic.

Or just another old geezer who hates the young, like so many others in this increasingly reactionary country.

Which reminds me... at least now I'm sure of one thing eh? 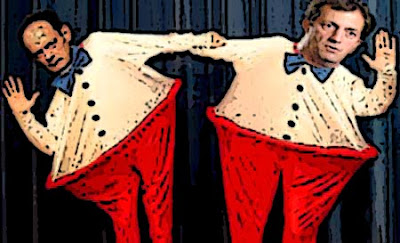 OK. Now go to a window, open it wide, and scream loudly like Howard Beale.

Neither of us have any love lost for Andrew Coyne, but Gabriel Nadeau-Dubois is no hero himself. When he needed to clearly send a message that the protests must remain peaceful and free of violence, he balked. The guy is really on a power trip, I'm afraid. And he is from well-healed stock himself, a product of private schooling. I think Charest and his government screwed up by overstating their victory, and too soon as well. But really, this has gone on so long, teenagers I know are losing all faith in the very CONCEPT of higher education. This is not productive. These student leaders got feted grandly in the french media, and quickly started believing in their own hype. Heck, they are young, eh? The high point was the offer made a week ago, http://www.montrealgazette.com/Counter+offer+puzzles+Beauchamp/6550047/story.html and Charest was an idiot not to take that and run. It was sensible and took the high road. The CLASSE weren't behind it, but realistically, their mandate is not as strong as portrayed. Student governments in this province (and I have seen quite a few, and up close and personal) always get their heads puffed up beyond all sense of reality. I am just sad to see a lot of innocent kids who just want to believe in something good and true getting used this way. Same old, same old. Too bad Coyne and Charest are acting so immaturely themselves. At the end of the day, a lot of kids are going to get the shaft under the footsteps of their own student leaders. Sad sad sad.

Coyne is little more than human trash. And as for Scott in Montreal, I could not disagree more! Why should Mr. Nadeau-Dubois condemn the violent protests?????? For generations people in the "establishment" have been telling rebels and revolutionaries that they need to give up all violent means, but the state is never willing to give up its violence. Charest can condemn the violent students and BUT WHO HAS THE GUNS AND THE TEAR GAS AND THE RIOT GEAR??????? The answer is, of course, the police. My reply to Mr. Charest would have been "yes, as soon as you give up violence, we will give up violence." In Syria the government tells the people to give up violence as they are shooting and bombing them.

When people are mostly peaceful (as 99% were at the G20) they are treated violently anyway! The police are little more than a criminal organization that is wedded to violence in everything they do. Charest only paid attention to the protests when they turned violent, before that he didn't care at all.

The state should never be granted a monopoly on legitimate violence. As soon as the state disarms then they can call on others to give up violence. Until then men like Charest are nothing but hypocrites.

I love these Quebec students. They're smart, funny and charismatic and they're addressing an issue (class) that has been ignored for thirty years. Bravo! All we hear about them in the English press is that they're radicals. Hah! The real radicals are the neoliberals. These guys are just standing up to the bullies who are implementing it.

Another kid had a skull fracture, a face fracture, a concussion and was in ICU for almost 2 days, cose to dying.

A young lady had her jaw broken and teeth shattered.

Police (SQ) says plastic bullets travel only 100 metres. The most dangerously injured was at 203 metres.