Quebec: The Mad Emperor and the Klown Media 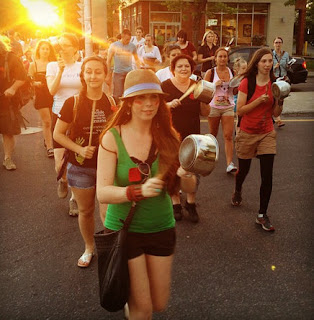 They were out in the streets of Montreal again tonight, for another casserole protest or cazerolazo

Since the weekend, hundreds of people in the island's central neighbourhoods have taken to their balconies, porches and sidewalks with pots and pans.

Refusing to be intimidated by last night's mass arrests.

That demonstration was declared illegal because protesters refused to give police their route in advance, one of the provisions of the new law.

Mass arrests and kettling of peaceful demonstrators, which only showed why that fascist law must be scrapped, and made Jean Charest look like more of an idiot. 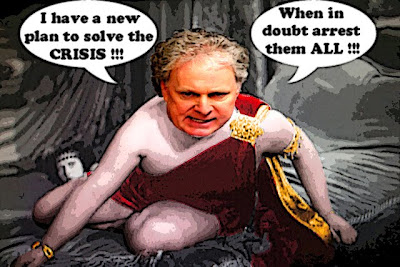 Prepared to do ANYTHING, to try to win the next election. Or try to make people forget the ghastly record of his corrupt government.

By turning peaceful protesters into THE ENEMY... 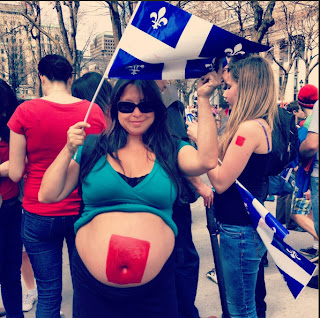 Just like MacLean's is trying to do with this ridiculous cover... 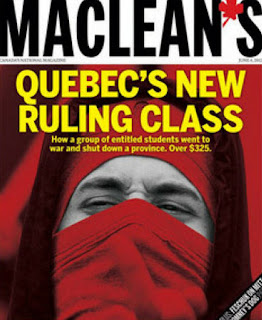 I mean really, in what country... or planet... do you see 700 members of the ruling class arrested in one night? Please tell me because I'd like to go there eh?

And as for the "entitled" part, their ignorant editors should really do some research, so they can find out who are the REAL "entitled."

Today’s youth face a grim future not of their own making. Is it any wonder that they’re angry about it? What they are asking for is what previous generations so eagerly gobbled up for themselves. If those generations now believe their entitlements were too generous, then, perhaps, in the spirit of sharing the burden, they might want to give some of them back.

Yup. As I said the other night, I have no idea where this movement is going, or what is going to happen. And sometimes that frightens me.

But I do know that young people have no choice but to fight for a better world. Or they will live as slaves, on a burned out planet. I do know that defying a fascist bill is not just a democratic necessity, it's a sacred DUTY.

And I also know that the mad Emperor Charest can threaten to arrest all his subjects, as his corrupt regime collapses around him. But he is doomed to FAIL.

Bill 78 is an abomination. Or just MERDE.

Fight the good fight, Simon. I don't know where it will end, either, but young people are learning something about themselves that they will never forget. Solidarity is a life-affirming and life-changing experience.

I really appreciate your posts on this, Simon. Thank you.

I am not in Quebec but it seems like Charest had little chance of winning another election anyway. If that is true, was he thinking looking like a "strongman" would improve his chances of reelection?

Ruin their day - show up at EVERY public event and question their actions. Why don't they put the same effort into dealing with the corrupt businesses - oh yeah, that would mean throwing campaign contributors into jail...? But make them state it.

As an Albertan I am ticked at the cheap education offered in Quebec. Not with what Quebec charges, but rather how dishonest Alberta is in claiming that it is not finacially realistic. It is financially realistic, but it would mean investing in the future. And for all the rhetoric, investing in kids and family is not a priority with the right wing. Especially if it means coming into conflict with the "BUSINESS - we need drones - Agenda"

It's really quite something to be in the thick of it all. Once Charest brought in his bill 78, that turned everyone against him (except the elderly, the privileged and a disproportionately large segment of the anglophone community, so yeah, my parents...)

I live in a small second-floor townhouse apartment in the Villeray area, and the other night, at 8:00 pm, you suddenly heard all kinds of pot banging (ie: "les casseroles"). I quickly grabbed three pots and wooden spoons and took my sons (8 and almost 5) out onto the balcony. All around me, especially among the 2nd floor tenants, as opposed to the ground floor owners, people were out there, joyously clanging away in a raucous show of neighbourhood solidarity. It feels like civil disobedience at its best and I feel (and hope) that it will make the worm turn.

hi Cathie...I definitely intend to keep on supporting the Quebec struggle. I haven't been so inspired since the rise of the Occupy movement, and I'm quite sure their paths will converge today.I know this is a country where demonstrations of any kind are frowned upon. But the way I see it to struggle is to live, and I'll take action over complacency any old day...

hi Boris...thanks a lot. I enjoy writing them. I love helping to explain Quebec to other Canadians, because I love the place and its people so much. So much so I live with one of them.;)
I have been feeling a bit down watching the Harper Cons lie, cheat,and dismantle our country, while we look on apparently helpless to stop them.So this awesome struggle in Quebec has definitely made me feel better...

hi kirby...Charest did have little chance of winning the next election, after his government's scandalous record. But the problem is the Pauline Marois, the bourgeois PQ leader who lives in a mansion that would impress Louis XV, isn't popular either. So anything could happen,and Charest was probably hoping he could benefit from being tough on the students. But now of course he's overplayed his hand, for Quebecers will never support a bill that looks something like the War Measures Act...

hi anonymous...I'm glad to hear you say this:

As an Albertan I am ticked at the cheap education offered in Quebec. Not with what Quebec charges, but rather how dishonest Alberta is in claiming that it is not finacially realistic. It is financially realistic, but it would mean investing in the future. And for all the rhetoric, investing in kids and family is not a priority with the right wing.

Because I agree with you completely. Albertans are not only getting screwed by the big oil companies, if the Alberta government managed things properly Albertans could have the finest services anywhere in the country. And having that government tell them they can't afford it is absolutely laughable...

hi Scott...I can only imagine what it must be like to be caught up in the thick of it all. And I can certainly understand why so many people want it to end so some semblance of peace can return to the city this summer.
But I must say I just LOVE the idea of the Scott and Kids Orchestra. It's such a wonderfully peaceful and joyous way to protest. Although shouldn't Scott the songwriter be writing a song for the occasion? I mean pots and pans make a glorious noise eh? But guitars are more musical... ;)

Och, my free time to make music is terribly limited these days I'm afraid. But this stuff from last summer seems appropriate to the general mood (forgive the rawness): http://www.youtube.com/watch?v=ogfAW5qoVEg

The lyrics to "No Healing" were posted on Tattered Sleeve last summer btw, when I was unemployed and nearly destitute.

The elderly? You would be surprised! One 95-year-old veteran wrote on his blog (yes!) "I did not go all the way to Europe to fight fascism to see it land here..."! Elderly people have been arrested! Not many, but it shows you how ridiculous and random the arrests are.

Some hassidim banged from their balconies, apparently. Mazel Tov!