Dr Mulcair and the Dutch Disease 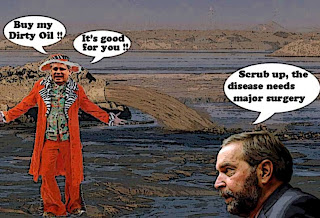 Ever since Thomas Mulcair warned that the Dutch Disease is killing this country, every shabby oil pimp and Con huckster in Canada has been lining up to denounce him.

And now we've finally reached the bottom of the dirty oil barrel.


"I really thought that type of thinking was discredited and it had been discredited for a long time. It's so backwards," Clark said. "I think that's just goofy."

But then I hear she's pretty goofy herself eh? Or desperate.

Even with support for the B.C. Conservatives on the wane, the governing Liberals would be facing an electoral wipeout if a provincial election were held now, a new poll shows.

Or goofy, desperate, and incredibly IGNORANT. For whatever this right-wing tool says, if she thinks the Dutch Disease has been long "discredited" she really should read this excellent report in this BC magazine.

Serge Coulombe, an economy professor at the University of Ottawa, and two European colleagues recently asked just how much of the manufacturing losses could be attributed to the petro dollar and rapid tar sands development. In the end Coulombe calculated that 53 per cent of the manufacturing employment loss (a total of 322,000 jobs) was directly related to a petro dollar and "Dutch disease phenomenon." That means for every job created in the tar sands (approximately 100,000) another job has died in the country's manufacturing sector due to bad public policy.

So she can understand what the Dutch Disease is doing to her province:

In a 2008 presentation to the Canada West Foundation, Jock Finlayson of the Business Council of British Columbia noted that every one cent rise in the Canada's petro dollar subtracted $150-$160-million from the forestry sector; and another $50-million from the mining sector. Since 2007 alone B.C.'s forestry sector has lost $2.5 billion due to Canada's wonky petro dollar.

And what Stephen Harper's Big Oil Cons are doing to our country. Hollowing it out,  beating up environmentalists, gutting our laws, and planting the seeds of a confrontation that could rip this country apart.

While the foreign interests who pull their strings, run away with the profits.

All those in this country who lick the cowboy boots of Big Oil look like pathetic stooges and sellouts.

And all those losing their jobs to the Dutch Disease are slowly turned into slaves. 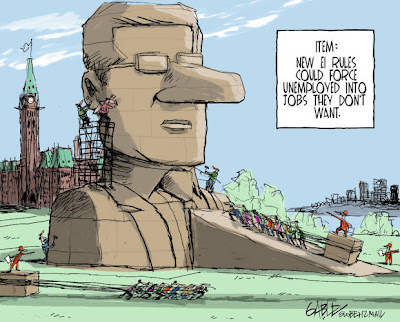 Conservative legislation restricting access to EI benefits risks forcing people into jobs they don’t want...The budget bill would remove provisions of the Employment Insurance Act that allow EI recipients to turn down an available job if it is not in the claimant’s usual occupation, is at a lower rate of pay or involves “conditions less favourable than those … recognized by good employers.”

But of course, those are just the economic consequences of the Dutch Disease. I'm mainly interested in whatever can be used to cure the Harper Disease. And in that regard I believe Thomas Mulcair has just given himself a mighty weapon.

For if he can harness the growing resentment in battleground Ontario, and BC and other places, and he has Quebec in his pocket, he can drive the Cons out of power in the next election. With one hand behind his back.

Which is why Cons like Christy Clark, and Brad Wall, the Premier of Saudi Alberta, and all the other Big Oil stooges in this country, are squealing like stuck PIGS.

Golly. I've always been interested in medical stuff eh? And I just LOVE the way Dr Mulcair diagnosed the disease and is wielding his scalpel. So I think I can confidently make my own diagnosis.

Today the Dutch Disease is killing us.

But tomorrow it will kill the Cons...

Simon you had me wondering for a moment, I thought the Dutch disease was something that happened every time Clark opened her mouth. She truly is a piece of work and a shame that she has made such a joke out of her leadership as she could really have turned things around if she wanted to but seems to revel in giving BC'er the finger at every appearance she makes. The DD phenomenon seems very plausible to me, but the losses in manufacturing go much deeper and wider into every single right wing policy that abounds and they are directly responsible for this. Harper's been successful so far in wrapping it up in rhetoric but the good paying jobs that are disappearing aren't coming back and voters are starting to see through this fraud.

Simon, we count the days until we can throw Christy and her pack of stooges out on the street. At times it truly seems as though she is wilfully trying to infuriate the public out here. Even her hackneyed "free enterprise party" pitch from the 80's seems to be the last coherent thought she can recall.

I thought that the Dutch disease originated with Bill Van der Zalm.

hi bcwaterboy...I don't know much about Christy Clark, but I must say everything I've heard about her sounds bad. A Liberal trying to act even more like a Con in order to defeat the NDP? Gawd. Politics in BC are even more complicated than they are in Quebec. ;)
But as for the Dutch Disease...what amazes me is that it took so long for politicians to even mention the word. And remember all those figures in the Tyee are at least a couple of years old. So the damage is even greater, and the Northern Gateway pipeline will only make matters worse. It's also important to note that the Harperites could do something to make its impact less severe, but because Big Oil doesn't even want its toenails clipped they won't. And that's why this issue if properly developed by Mulcair will hurt the Cons so badly...

hi Mound...well I certainly wish you luck. Although judging from the polls you may not need any. ;)

hi Skinny Dipper...no no no he was the cause of Foot in the Mouth Disease. The Dutch Disease began when Harper and the Sultan of Saudi Alberta shared a Big Oil kruller together, without checking the best before date...