Jean Charest and the Great Distraction 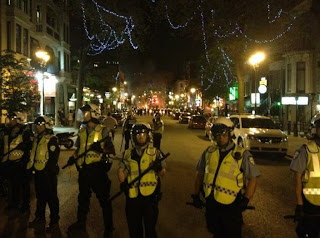 When I see pictures like this one of my beloved Montréal on a warm Saturday night.

On sedate St-Denis street of all places.

And I read what kind of peace the Quebec government's totalitarian Bill 78 has brought.

The adoption of emergency legislation to end Quebec's escalating student crisis stoked fiery debate across the province overnight, from highly charged street protests that lasted into the wee hours to harsh editorials and some calls for civil disobedience.

When I read how police pepper sprayed the peaceful patrons of a bar. On a patio of all places.

Or watch the video...

Or the live feed of the nightly demos on CUTV.

I can't believe this is happening. In Quebec of all places.

And all I can say is you gotta give Jean Charest credit...a solid D-minus or an epic FAIL... for making a tense situation worse.

They don't call him Curly for nothing eh? 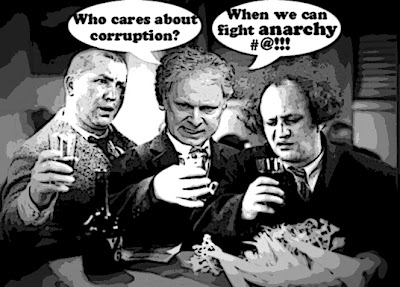 But then he is almost entirely to blame for what is happening. He refused to negotiate with the students even as they staged massive peaceful protests for months. He has turned down every invitation to meet with their leaders.

Instead he tried to divide them. He provoked them, he betrayed them. Now he's using their anger as a Great Distraction, to try to make Quebecers forget the record of his corrupt government. And just as a commission is about to begin hearings into corruption in the construction industry.

Which will almost certainly make the word Liberal synonymous with criminal. If it isn't already.

But now he has overplayed his hand. Now it's more than just a struggle over tuition rates or the priorities of a civilized society. Now it's about standing up for civil liberties. And the revolt is spreading.

From this red square on a Montreal firefighter... 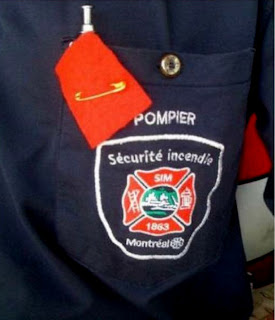 To the red squares worn last night by my favourite group Arcade Fire.

In New York, members of the Montreal-based rock band "Arcade Fire" wore the movement's iconic red squares during an appearance with The Rolling Stones' Mick Jagger on Saturday Night Live.Jagger wore a red shirt, but no red square.

A day earlier, players in Quebec's film industry were sporting them at the Cannes Film Festival.

Yup. Jean Charest tried to fool Quebecers with his Great Distraction. But it will not work.

And for the sake of all Quebecers, before this situation spirals out of control.

Let's hope it really is the last time...

One big factor that a lot of people probably aren't aware of is the fact that the Canadian Grand Prix is only three weeks away. Formula One racing may not be that big in Canada, but internationally, Formula One racing is second only to the Olympics in terms of revenue. Believe it or not, there's more money in Formula One than in the World Cup of Soccer.

Canada is becoming, an angry country. Harper has more than a few lawsuits against him.

I don't care where I go, I hear angry Canadians. The anger is directed, mostly at Harper. Two older ladies, actually used cuss words. The Etioboke Center election, was declared null and void by the court. They said, Harper is going to appeal, to his newly appointed Conservative judge, who begins his job Aug 7/2012. Let the dirty politics/dirty tactics begin again. Canadians are really waiting on this one.

Helena Geurgis and her husband, were cleared of all wrong doings by the police. Helena is also suing Harper. The war Veterans are suing Harper.

Now Harper is trying to stop the investigation of the robo-calls. What does that tell us? Means Harper must be as guilty as hell, is what most Canadians are saying.

There will be more anger, more riots. Canada is a tinder-box of fury, ready to erupt at any given moment.

I doubt there will be any peace, even for the Canadian Grand Prix. I think the riot is about much more, than tuition fees.

hi Mark...I'm very aware that the Canadian Grand Prix is only three weeks away. In fact, I'll tell you a secret. I'm a huge fan of Formula One. Just don't tell anyone, because I find it hard to defend it. ;)
But yes, no doubt the Premier and the Mayor of Montreal will step up the pressure before the Grand Prix weekend. My advice to them forget it, it won't work. Surrender to the inevitable, tell Bernie Ecclestone to fuck off, and wave the RED chequered flag at the end...

hi meadowlark...this country is becoming an angry country, and I blame the Harper Cons. They have played one group of Canadians against another from the moment they came to office. And now they are reaping the whirlwind. Or they soon will. I want Canada to be a peaceful, gentle, civilized society. But that can't happen until the Cons are driven from power...