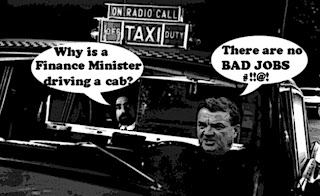 When you are numbed to the horror of Harperland, it's easy to laugh at little Jimbo Flaherty. The nasty Con garden gnome is a natural comedian.

"I was brought up in a certain way. There is no bad job, the only bad job is not having a job," he told reporters. "I drove a taxi, I refereed hockey. You do what you have to do to make a living."

I mean can you imagine getting into a cab and discovering that Jimbo, sitting on a box the size of his Trojan Horse budget, is your DRIVER? That's hilarious eh?

Until you remember that he is a brutish Con ideologue who once threatened to jail the homeless. And now he's going after the disabled.

"That means we are going to have to encourage more persons with disabilities to work, more seniors to work, more aboriginal people to work, including young people. We need to get rid of disincentives in the employment insurance system to people joining the workforce."

Or you stared in horror today as Diane  Finley bared her teeth.

Or you watched Question Period and you saw the Cons turn the Commons into a Roman circus. Again. Going hog wild every time Thomas Mulcair quoted Jimbo Flaherty.

“When asked whether unemployed teachers and nurses should be forced to take any job that comes along or be taken off EI, the minister said: ‘There is no bad job. The only bad job is not having a job.’ ”

In his seat across the way, Jim Flaherty nodded. The government benches applauded, several members feeling it necessary to stand and clap for this recitation of the Finance Minister’s philosophy. Mr. Mulcair waited for the applause to finish and then started again. ”Mr. Speaker, the minister said: ‘There is no bad job. The only bad job is not having a job.’ ” Once more the Conservatives applauded.

Because then it should be clear to all that what we're seeing here is just another chapter in Stephen Harper's War on the Unemployed.

Their petro dollar policies are destroying our manufacturing sector. But instead of doing something about it, they are beating up their victims. They are making it harder and harder to collect E.I. They are slashing benefits, they are going after pensions. They are are telling the unemployed that they better love our new low wage economy or ELSE.

And how is their grand plan to put all our eggs in the commodity basket going? Answer: not so good.

"The commodity sectors of our market have really taken it on the chin," said Fred Ketchen, manager of equity trading at Scotia Capital, who noted that the metals and gold sectors have plunged more than 20 per cent this year while the energy sector has fallen by more than 12 per cent.

Surprise. Surprise. I mean would you trust Jimbo Flaherty to take you ANYWHERE in his taxi?

You know I always thought this guy was the scariest cab driver I'd ever seen...

But riding in the back of Jimbo's cab, as he mows down the poor, threatens the unemployed, and steers straight for economic disaster is an even worse nightmare.

The Cons are taking Canada to a very bad place.

And they must be STOPPED... 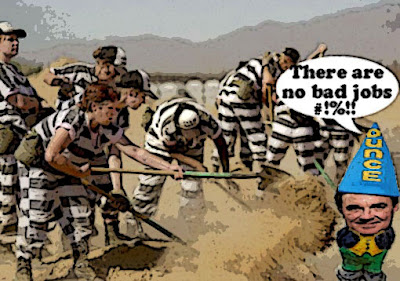 You're on fire these days, Simon.

I have never heard, such absolute stupidity in my life. How does a single mother, afford the cost of moving to a new area. Re-locating to a different location, is thousands of dollars. Someone like Flaherty thieves $1,300, for luxury hotel suits. That's more than a single mother has for an entire month, to look after her children. That's exactly how stupid someone such as Flahery really is. For a family having to relocate, costs even more.

I won't bother to say everything, regarding the ministers outrageous expense accounts. We all know them by heart. Did Harper not waste $1 billion dollars, on a stupid fake lake? $45,000 to take in a ball game. $11,000 per hour jet, to take in a hockey game. A whopping $47 million on Harper's security bill. He really must think himself, really important to waste our tax dollars on himself. He isn't worth a thin dime.

See what I mean, when a person gets started on Harper and his Conservatives, theft of our tax dollars. Maybe just one more, Bev Oda.

I keep wondering where he got paid to be a referee? Isn't it usually a volunteer position? I do not trust this man, not one little bit.

hi Boris...thanks for the encouragement. Although I have to admit I'm far from on fire myself these days. I can barely summon up enough energy to blog.
But luckily there's always Jimbo "Jail the Homeless" Flaherty,to get me going ahead.
Because I really want future generations to understand that he wasn't just a nasty little Con gnome. He was also an absolute dunce...

hi anonymous...yes I thought it was stupid too, and cruel. What a heartless little Con to be yapping like that, after killing tens of thousands of jobs all over the country.
And as you point out his plan to make people move to find a job is absurd.
But then Flaherty has always been an ideologue, like Stephen Harper he wants to destroy government, and he doesn't let facts get in the way. Which explains why he is slashing jobs, when austerity is killing Europe. The old slogan Con times are hard times, was never so true...

hi Anonymous...you know that's funny, I was wondering the same thing. Maybe it was the teams. You know... the ones who usually won. ;)

Good point re the cons expense accounts and don't forget Airshow McKay strutting around the country in military/search and rescue aircraft. Flaherty really is monstrously stupid but so is the rest of this crowd to think there are even enough jobs to go around. In the new "global" economy that we're seeing most of these jobs they're referring to wouldn't even pay the grocery bill for a week for even a small family with one or two kids, before even paying for housing costs. What are they thinking? Almost too painful to watch.

That was such a bizarre example. Other than major league hockey, I think refereeing is a volunteer position. Even FIFA World Cup football referees are volunteers. Maybe Flaherty meant he was paid to be a mascot.