Stephen Harper and his RoboCon Monsters 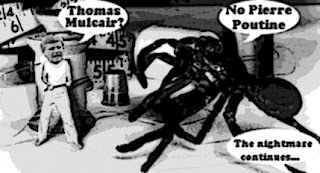 I always wondered whether Stephen Harper would be brought down by the monsters he created.

And in that regard I must say I'm extremely encouraged.

The digital trail left by the suspect behind misleading robocalls to Guelph voters on election day 2011 has sharply narrowed, with Internet records linking the mysterious “Pierre Poutine” to an account held by a worker from the campaign of local Conservative candidate Marty Burke.

Because now we have a name, an I.P. number, a proxy server, a possibly fatal error:

Most of the IP addresses used by Poutine to logon to RackNine’s website to set up the calls were hidden by a proxy server that masks the originating IP, in an apparent attempt to conceal the user’s identity. But Poutine — or “Pierre Jones”, as he was known to RackNine and PayPal — slipped up and made contact from the same address used to access Prescott’s account with the company.

Records from CIMS given to Mathews by Rougier ——indicate that Prescott downloaded three “Daemon Dailer” reports for Guelph — a list of phone numbers with voters identified as supporters or non-supporters. One of those reports “cannot be recovered from CIMS,” Rougier told Mathews.

A possible cover-up in the heart of the Con Death Machine. Some crazy RepubliCon talk from Michael Sona.

Crawford told Mathews that, while in Burke’s campaign office, he had heard Sona speaking to campaign manager Ken Morgan about “how Americans do politics.” The conversation referred to calling non-supporters late at night, pretending to be Liberals, or calling electors to tell them their polling stations had moved. 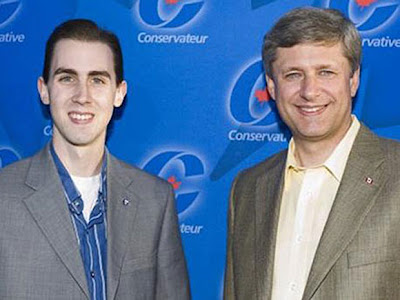 And of course, a clear pattern of systematic abuse.

Ekos Research Associates says its survey found that Liberal, NDP and Green party supporters in seven key ridings were much more likely to report receiving a misleading telephone call in the final days of the election than Conservative supporters in the ridings.

Or all the signs of an elaborate widespread criminal conspiracy.

And the best news? When the culprit or culprits are finally arrested, he or they will almost surely turn out to be Stephen Harper's little monsters. The Con fanatics he created and inspired. And taught them that winning was EVERYTHING. 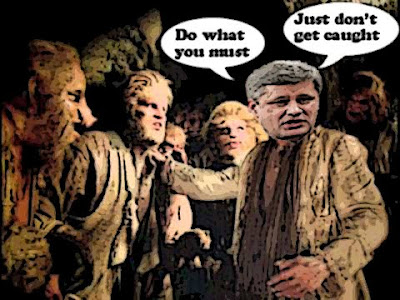 But of course now it's too late, his evil madness has backfired, and his little monsters will consume him. Like the half humans consumed Dr Moreau on the Island of Lost Souls.

Slowly and VERY painfully all the way to the next election.

Oh sure, the Cons will try to portray the guilty as rogue operatives. But who will believe them? When they had access to the War Room's most closely guarded data base. And Great Ugly Leader suckled them like a sow.

Oh goody. Who knew it would be so easy eh?

We have the Cons almost where we want them.

And sooner or later we will DESTROY them...

Canada and the citizens, will never survive another three years of Harper. Over half of Canadians did not want Harper as P.M...he knew it, he cheated. The election is not valid and Harper should be forced to resign. Now 2/3 of Canadians want Harper gone.

Shame on the Conservative ministers, for supporting a monster, such as Harper. We know Harper is a fascist dictator....Harper's Northern Foundation Party, from 1989 says, exactly that.

And just why are we not going to survive another two or three years of Harper? The longer he hangs on, the more ardent people will be to scrub every trace of him from the body politic, and slam his miserable carcass into jail for the rest of eternity.

hi anonymous...I understand your impatience, three years does seem a long time to wait before we can defeat them, and then put them in jail. But you know what they say...anticipation makes the heart fonder, and revenge is a dish best served cold...;)

hi sunsin...yes, although I'm an extremely impatient person myself, I agree with you completely. After three more years of Harper, people will be so sick of him the Cons will be gone for a GENERATION...

I think the Cons wuill be gone longer than Mulroney's. He had 2 seats left untill Harper got hold of them and the Progressives left, and now have no home. Some of them should stop Harper, right in government, unless they like power too much...maybe Mutiny?

The chances are high that the Cons will cheat their way through another election. The longer they have to consolidate their systems of control, the more subtle, undetectable and effective they will become. Canadians will pay dearly for their passivity, wilful ignorance and cowardice. Quebec is the only place to show any guts.