The Quebec Students and the Savage State 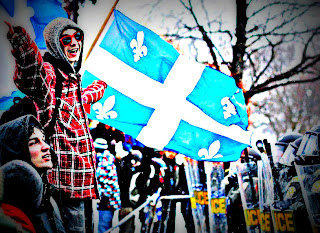 Uh oh. It  looks like my Quebec student's victory celebration party, from which I'm still recovering, was a little premature.

Students in a half dozen colleges and 10 university faculties and departments voted to reject the agreement on Monday after the Charest government boasted of having won the battle. Students at other schools are set to vote on the deal throughout the week, but the trend is clearly running against it.

So premature in fact that when I return to Montreal, after having praised this "deal" as a decent "compromise" in a post the other night, I'm going to have to wear a mask or a hoodie. So some of my friends don't recognize me and beat me up. Or at the very least call me a fool.

But hey, how did I know that the Quebec Liberals would cheat?

After weathering criticism from members on the weekend, student leaders claimed Monday the agreement they signed was not a true reflection of the 22-hour-discussions held Friday night to Saturday afternoon in Quebec City. They also accused Premier Charest and Line Beauchamp, the Education Minister, of gloating the government had not conceded on the tuition increases.

How did I know that I couldn't trust the Education Minister?

How could I ever have imagined that the pathetic ex-Con Jean Charest would strut around like a barnyard rooster, crowing about how he had put the province's students in their place, in a desperate attempt to try to take the spotlight off his corrupt government ?

The big man. The big chicken... 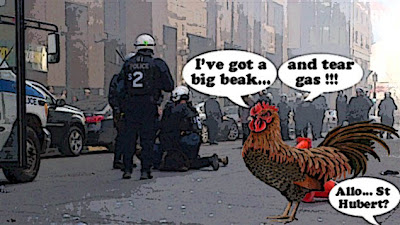 Oh well. One day I'll learn to lead with my head instead of my heart.The good news is that the Quebec students are showing amazing strength and solidarity, even if many of them face losing the whole semester.

And at a time when the Con regime is killing jobs, strangling government, and trying to turn us into a brutish petro state, they are fighting for a better and more human society.

No wonder those Quebec student protestors have been spooking the English Canadian establishment. If they get their way, the same ideas could catch on here, leaving the best-laid plans for austerity in tatters.

Helping Canadians understand that there are better models...

Under the more sensible Scandinavian approach — banned under the business dogma that dominates here — the tax and transfer system helps citizens move through the stages of their lives.

Education is paid for by those in the workforce whose retirement will later be paid for by the students whose education they paid for. Over the life cycle, it all works out. Everybody contributes when they’re working, and gets a hand at the beginning and end of their lives.

Better models than the Made in America one, or the horror of Harper's jungle.

The savage state or l'état sauvage... 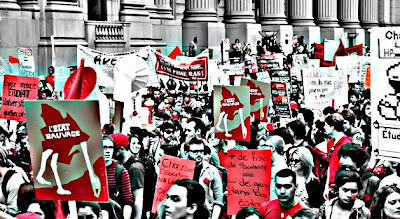 So they are marching for ALL of us.

And the bad news? The savage state is going to try to crush them.

Because Jean Charest dreams of winning an election, on the backs of the young.

Here's to the Quebec students.

May their strong but gentle spirit never be broken...

I don' want you to have to hide your face in Montreal, but I am glad they are rejecting the offer. I felt like it was too easy for Charest to renege on. The students were allowed to find savings, but whether the government agreed to implement them was not defined. And the tuition increases stand. I wish the students had withheld next year's tuition. That would have got the capitalist's attention.

I am proud of those students and afraid for them. I hate the mess we are leaving for them.

You are so right: there are better ways. You know, with our big brains and our massive curiosity, we can do so much, and yet we just seem to be sinking to ever greater depths of inhumanity. I don't get it.

Hi Simon; Please don't ever learn to lead with your head instead of your heart lest you become just another Blogger and not Montreal Simon.

What I don't get is: protest, sure! And more power to them for standing up for a more just society. But why don't they continue to go to class? How is skipping school helping? They call it a strike but they're really just not going to classes, not taking advantage of the current educational opportunities they have signed up for and spent good money on. There is nothing stopping them from marching for what they believe in while still going to class, which would show they truly care about their own education. When I was in school, I wanted to be there, participate, debate, and...get an education! If I had a march I wanted to join, I'd do it BETWEEN classes. Imagine that.

Look, I see these guys every day, in the streets here and there, going for marches of a half-hour, an hour, or two, often at night. But that can easily be fit in with their class schedules. And something like two thirds of the students enrolled have been actively attending classes and taking exams. This concept of a student "strike" makes no sense to me.

hi Karen...don't worry, none of my friends would be mean enough to beat me up. I'm the one who knows karate.;)
But seriously, I'm also glad the students are rejecting the deal because the Charest government cheated. I'm disappointed because the deal would have exposed how much money the students pay for stuff like research that has nothing to do with teaching. But I'm very proud of the students for standing up for a better vision of society. Thanks to the Harper Cons and their mentality the race to the bottom continues. But I like to think the Cons are digging their own grave. Because students are being politicized and that can only be good news for our democracy, and bad news for the capitalist tools...

hi Kev...don't worry there's not much chance of that. When I see what the Cons are doing to my country, and my ears turn red, I just can't help myself... ;)

hi Scott...look I'm not there, I haven't experienced what it's like to live in the midst of such turmoil. But perhaps because of that I can look at the big picture, and celebrate that at least in one corner of Harperland the kids are standing up for a better vision of society.
If we don't challenge the status quo how are we ever going to change it? I understand your point about not attending class, but being willing to sacrifice a semester shows their commitment to the struggle. And besides Scott, I'm afraid that when I was at McGill I missed a lot of classes for a whole lot of reasons. Working for the McGill Daily, attending protests, cohabiting with Seb in Quebec City, and playing pool. So who am I to judge? ;)
In a country where passivity is the norm, and a thug regime holds court, anything that breaks the silence sounds glorious to me...