Quebec, the Con Media, and the Greek Obsession 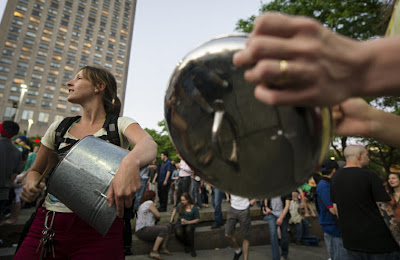 It's funny eh? When I see pictures like this one I see people standing up for their rights, telling a corrupt government to take their fascist bill and shove it, or just joining others to demand a better world.

But most of the Con media only seem to see a mob, dangerous terrorists, and above all GREEKS !!!!

It's an absolute obsession. Diane Francis says Greece must go and the Quebec Students too !!!!! David Warren says Quebec is Greece because it is. And the REAL cause of the protests is the collapse of religious order !!!!!

Then of course there's Margaret Wente... 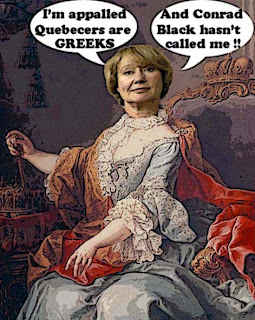 Making a fool out of herself. Again.

And for the icing on the cake, or the tzatziki sauce on the souvlaki, there was the TVO producer who wrote that Quebec is like Greece because they both worship Communist kitsch !!!!!

Gawd. Remind me never to watch that network again.

But seriously eh? Do those hysterical fools think that they are insulting us by calling us Greeks?

You know, these people... 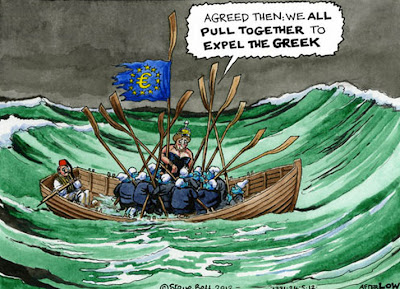 The designated scapegoats of a corrupt capitalist system.

The ones who are suffering all kinds of deprivations and indignities.

When the Athens maternity hospital where Anna gave birth asked her to pay for the costs of her Caesarean section, she told them she did not have the 1,200 euros ($1,500) they wanted. They responded, she says, by threatening to keep hold of her baby until she paid the full amount.

The ones who are growing poorer and hungrier, while the capitalist hogs get fatter and fatter.... 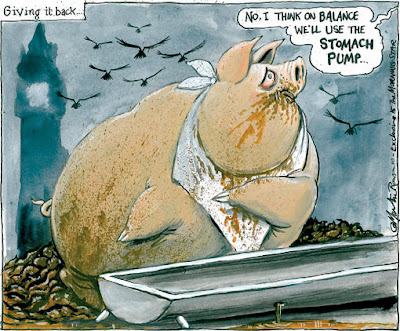 So if those Cons think that they are insulting us by calling us Greeks they're wrong eh? Because at this time in human history we are ALL Greeks. And proud of it.

And whatever our foul Con media says, we will not be intimidated.

We will defeat the Cons.

And we WILL change the world.... 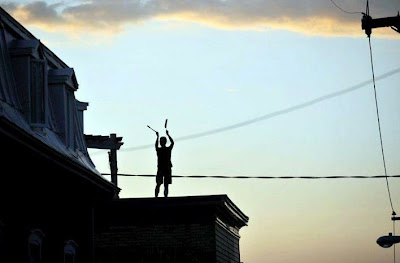 Greece or Greek is the new red scare Cllr Minnon-wong Accused myself and a couple others of putting Toronto at risk of becoming Greece yesterday for having the temerity to muse about tearing the Gardiner down. Yes we must be afraid very afraid indeed, I just wish I knew what we are supposed to fear.

Another excellent post, Simon. And I adore that Rick Lak pic. Today, my Gazette tells me even the United Church of Canada is onboard against Bill 78. They pointed out that, "in scriptures, we as Christians see Jesus riding on a donkey into Jerusalem, surrounded by his faith community expressing their beliefs and he did not have to give eight hours' notice to the Romans."

I did actually laugh out loud at that, especially after imagining the loaves and fishes miracle reduced to feeding a throng of ...less than 50.

So glad to have discovered your blog, Simon ...so many of us here in BC are supportive of what the folks in Quebec are trying to achieve..and we love your passion and determination, and the unity is great in the face of CRAP efforts to isolate your Province, yet again...won't work this time, and the entire country seems sick to death of Con machinations already..and three more years of this? Hope not!
http://leftyinparadise.wordpress.com/

hi Kev...the Con obsession with Greece is frankly bizarre, and as someone who hates bullies I hate to see anyone kicking a people when they are down and suffering so much. And as for Minion Wong I have to cross under the Gardiner expressway on my way to work and back, and I have to keep an eyes peeled, and my head covered, in case a chunk of concrete falls on my head. The sooner they demolish that monster the better...

Hi Scott...thanks and I LOVE that message from the United Church. With decent people like you and those Christians on our side, how can we lose? :)

hi mizdarlin...I'm glad you discovered my little blog. It's not the greatest thing since Shakespeare, but at least I try to keep my heart in the right place. Also while it's true that an election is still three years away *groan* there are still lots of creative ways we can use to try to block or delay the Con agenda. And of course, when we do take power we will change every law the Cons ever passed, and make Canada our country again...

I too am a BC reader of your excellent site. BC is also feeling very Greek, and proud of it. We do support Quebec, on their quest for fairness to the people. I don't think it's all about tuition. I think it's a jumble of things, all inter-related.

Canada has become a cesspool of corruption and greed. There is anger at the governments thieving of every last cent from the citizens. Harper did start out with a $13 billion dollar surplus. $1 billion, was spent on Harper's stupid fake lake. Meanwhile, Harper is slashing all the services, we pay through the nose for. Harper and his Conservatives, blatant theft and misspending of our tax dollars, is obscene. The Conservatives huge salary's and gold plated pensions, are unsustainable. Harper giving billions of our tax money to, the wealthiest corporations in the world. Canada in wars, we had no right to even be in. Harper giving Canada to China, on a silver platter.

There is the Etioboke Center election, declared null and void by the court. Thing is...Harper is appointing two new Conservative judges. We are waiting to see, if one of the new judges will hear Harper's appeal. Harper is desperate to stop all of the ridings in dispute of the election results.

Harper is also trying to quash, the election fraud and the robo-calls. What does that tell Canadians? Harper is destroying our Democracy. He is taking our Civil Rights and Liberties away from us too. Harper is an, out and out dictator. He is every bit as hateful as, Stalin, Hitler and Mussolini.

hi anonymous...I was very glad to see that the NDP in BC is doing so well, and hopefully after burying the Con Liberals they can help do the same to Harper and his gang. Sometimes when I look at the Con record it makes me almost dizzy. There is so much outrageous behaviour, so much contempt for democracy I don't know where to begin. But it will all add up in the end, and for the first time ever I am confident that we will be able to drive the Cons from power for a very long time...