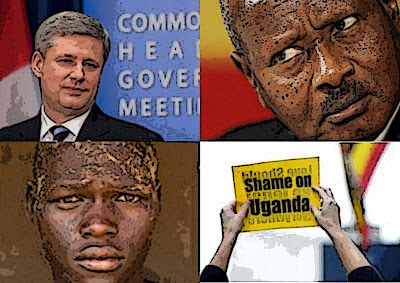 Well I see that Stephen Harper is claiming he privately warned the President of Uganda not to jail or kill gay people.

"It was not discussed multilaterally; however I did raise it directly with the president of Uganda and indicated Canada's deep concern, strong opposition and the fact we deplore these kinds of measures."

But of course I don't believe him.

How could he? When the people responsible are his kind of Christians?

Both opponents and supporters agree that the impetus for the bill came in March during a seminar in Kampala to "expose the truth behind homosexuality and the homosexual agenda".

The main speakers were three US evangelists: Scott Lively, Don Schmierer and Caleb Lee Brundidge. Lively is a noted anti-gay activist and president of Defend the Family International, a conservative Christian association, while Schmierer is an author who works with "homosexual recovery groups". Brundidge is a "sexual reorientation coach" at the International Healing Foundation.

And the Ugandan M.P. who introduced the Gay Genocide Bill is a member of the sinister Christianist political group The Family.

"[The] legislator that introduced the bill, a guy named David Bahati, is a member of The Family," he said. "He appears to be a core member of The Family. He works, he organizes their Ugandan National Prayer Breakfast and oversees a African sort of student leadership program designed to create future leaders for Africa, into which The Family has poured millions of dollars working through a very convoluted chain of linkages passing the money over to Uganda."

In short, the same kind of religious fanatics and homophobes who make up the Con base and are crawling all over Harper's PMO.

If Stephen Harper had really wanted to help save the gay people in Uganda he should have criticized the Ugandan government PUBLICLY, and threatened them with being expelled from the Commonwealth.

But he didn't. And neither did the Commonwealth of Homophobes.

The gays of Uganda have been abandoned.

But we will not forget them. 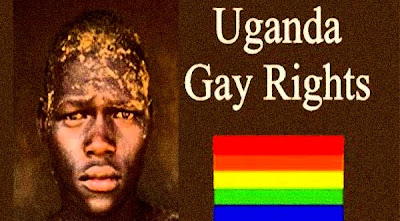 And when it comes to this Con government. That could have done more to save them but didn't.

Because their executioners are Christianist fanatics.

NPR interview with Jeff Sharlet where he talks explicitly about the links between Ugandan president Yoweri Museveni and "The Family" -- http://www.npr.org/templates/story/story.php?storyId=120746516

Article on ties between US Pastor Rick Warren and Martin Ssempa, a Ugandan pastor who has endorsed the proposed legislation -- http://blog.newsweek.com/blogs/thehumancondition/archive/2009/11/29/pastor-rick-warren-responds-to-proposed-ugandan-legislation.aspx

Jeez, you queers already can live openly in almost every industrialized nation in the world. Why can't you just leave Uganda and live somewhere else? Homosexuality is WRONG. And trying to tell people it is not is WRONG.