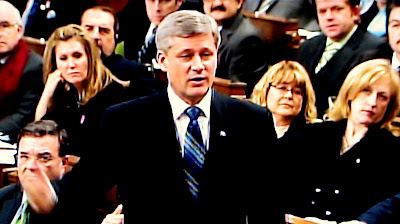 Well I see that after running away from the Con Torture and Rape Scandal for a week, Stephen Harper crawled back to Parliament today.

And what an ugly spectacle it was.

"The diplomat in question, as everyone knows, has a right to his opinion and has given us his opinion," Harper told the House of Commons.

"We also know that a large number of his colleagues didn't agree with those opinions and … they have asked for their right to speak, so I’d encourage the opposition not to muzzle them."

Can you believe that ? Calling Colvin's allegations an "opinion." When that decent Canadian wasn't the only one sounding the alarm.

At the time, numerous reports in Canada and abroad concluded that torture and abuse was routine in Afghan jails, including warnings from the U.S. State Department, the Afghan Independent Human Rights Commission and the United Nations.

And Stephen "Handcuffs" Harper, who has muzzled everyone from his own caucus to the civil service and the military, is the LAST person in the world to accuse others of trying to muzzle ANYONE.

Has this political thug no shame? And how dare he try sabotage the Parliamentary Committee by suggesting that David Mulroney should jump the queue and testify before the committee has the documents to properly question him?

When Mulroney should just take a number, and then head back to China at his own expense to prepare for the Harper visit. Because it should be a doozer.

With less than two weeks to go before Harper heads to China, explosive allegations that Canada was likely complicit in torture in Afghanistan have given China everything it needs to rebuff any criticisms he might level over its controversial human rights record.

With Stephen Harper trying to score brownie points by criticizing China's human right's record, while him and the ambassador are pursued across the country by the media, asking about Canada's torture fest in Afghanistan. And WHO covered up WHAT.

But I guess that's why the Cons are so desperate. Because I noticed something really nice about Harper today.

The bags under his cold dead eyes... 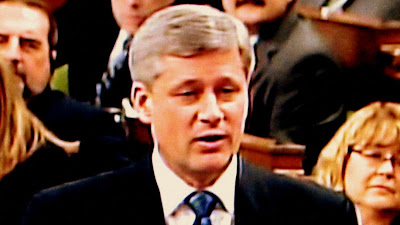 Uh oh. It looks like somebody has been burning the candle at both ends trying to micro-manage this torture scandal. Just like he micro-managed the first one.

Golly. If those bags get any bigger we'll have to start calling him Great Coon Con...and shoo him away from our garbage cans. Although that's where him and his foul Cons belong.

For disgracing Parliament and shaming us in the eyes of the world. And that's BEFORE they humiliate us in Copenhagen.

Excellent. The universe is unfolding just as I hoped it would.

And the Torture Monster is almost DONE...

Barchand, the BQ MP, said on CPAC last night that the Chinese are calling Mulroney the "Ambassador of Torture". LOL

I was told about this torture a few summers ago by a Red Cross worker on leave.
Canadians no longer welcomed by locals and have lost their reputation,
Seen as Americans.