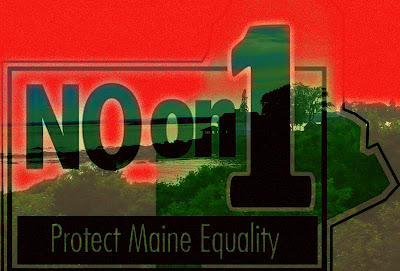 I stayed up late tonight to watch the results coming in from Maine. A steady stream of messages coming in from from my family and friends down there, and others trying to save gay marriage.

As gay Americans have been every single time gay marriage has been put to the ballot, and the majority gets to decide whether they are fully human or not.

I'm so sorry for all the gay people and their straight friends who worked so hard to try to convince people in Maine to do the right thing. 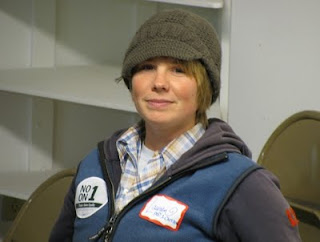 They must be so disappointed.

But sadly the wretched bigots from NOM and the Catholic Church, managed to fool the ignorant into thinking that gay marriage was a threat to children.

And our gentle message didn't...

But you know I wouldn't change a thing. Because that's why we're better than them.

My brothers and sisters and friends in Maine fought the BEST campaign ever. They were brilliant. I'm so proud of them.

What gay writer Rex Wockner had to say is true:

There will be days like this Tuesday when bigots might force a backward step in the inevitable, unstoppable march to equal treatment under the law for GLBT Americans. The next generation will remember "Yes on 1" voters the way we remember people who believed black folks should drink from separate water fountains. I absolutely guarantee you that.

And so is what Andrew Sullivan says.

However long it takes, how many battles we have to lose before we win the war, however hard it is to put your very integrity as a human being on the line for approval by strangers: this is worth doing. This is why we're here. This is what we're supposed to do.

History is on our side. The creepy bigots will be defeated.

And whether we like it or not. And I do.

Well, the final tally is not yet in on the referendum in Washington state (against domestic partnerships), and last I heard we were slightly ahead in that one. And the bigots actually FAILED with a proposal to repeal an LGBT rights ordinance in Kalamazoo, Mich. (Plus, an out lesbian also got elected as mayor of Houston.) So we did make *some* gains, and every little bit helps.

Its dismaying to see this happen, yet it was close. There were still some victories but this one looked ready to be had.

hi Mark...I was hoping it would. I love that little state, my American cousins have a home there, and it was so great to go there after the legislature voted for gay marriage.
I know some Mainers are really crusty characters, but I thought they would be independent enough to do the right thing. But when I saw a poll that 70 percent believed that gay marriage meant they'd be teaching gay marriage...whatever that means...to young children I knew it was all over. And I'm very disappointed..

hi 'berto...yes you're right, I should have mentioned some of the other small gains we made. But I was too crushed to do that...

hi Ricky...yes it was close, and as I said in my post I thought our side did a really good job. We raised more money than the other side, and the volunteer effort was EXCELLENT. So give me a couple of days and I'll be my usual self. But right now because it was so close it just hurts even more...