The Catholic Church on How to Lie Without Lying 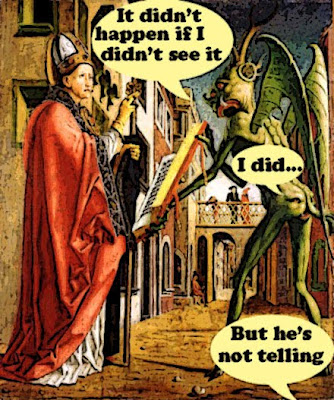 I've often wondered how the old boys club that runs the Catholic Church presumes to lecture gay people, or anyone else for that matter, about matters of morality.

After all the abuse. All the cover-ups and all the lies.

But that was until I learned that they have deluded themselves into thinking that they can lie without lying.

The commission added: “This is clearly untrue but in the Church’s view it is not a lie because, when the curate told John that the parish priest was not in, he mentally reserved the words '…to you’.”

Oh boy. That's good one eh? Remind me to use that one the next time Sébastien asks who ate the last ice cream bar in the freezer.

---Gee Sebby I have no idea...I mean I don't DARE to remember. But I wouldn't be surprised if it was Angus.

Seriously though a couple of things come to mind.

The next time you want to complain to a priest, and his flunky opens the door, ask him if the priest is in....THE HOUSE. Because it's harder to mentally reserve that one.

And two... how dare these miserable old lying hypocrites go after the gay community?

Seriously, I refuse to hear lectures on wholesome values and the meaning of family from anyone affiliated with a church that engaged in such shocking and outrageous behavior. The Catholic Church has, indeed, lost its right to discuss such issues and expect thinking people to keep a straight face.

Just to reiterate, the Bishop's and Archbishop's have zero credibility to even discuss my healthy relationship. At least my boyfriend isn't an altar boy.

Because mental reservation is nothing more than moral illness.

And despite my moral reservations when it comes to ice cream bars.

We're soooooo much better than them...
Posted by Simon at 9:50 PM

I have always been disgusted with the Roman Catholic church, which accuses its enemies of the VERY things it is guilty of itself, from "recruiting" to pedophilia. The Vatican should be stripped bare, its treasures sold off to provide compensation to its legions of victims, its inhabitants cast into dank dungeons, its structure dismantled and the earth sown with salt where it sits. It is a vile, evil institution.

hi 'berto...yes it has turned into an evil institution hasn't it? However it is important to realize that there are a lot of good Catholics who are as disgusted with the Vatican mob as you and I are.
But then they operate under the assumption that Christianity is about loving and helping your neighbour not hating or hurting him. What a concept eh?
I keep hoping the good Christians will reclaim their churches, but these patriarchal bigots are so entrenched and powerful it's not going to be easy...