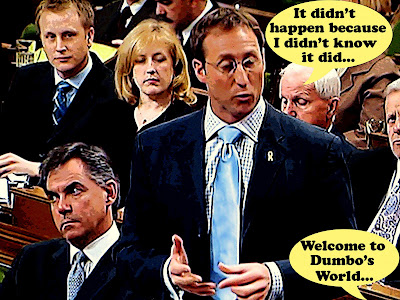 Oh boy. This is what happens when the Cons let Peter Dumbo MacKay be the front stooge on the rape and torture scandal.

One he is completely out of his league.

Anyone familiar with MacKay’s political stats knows he is a one-pitch wonder, resorting inevitably to throwing the ball directly at his opponent’s head.

So out of his league he didn't realize the implications of handing over prisoners to KGB agents.

When we interviewed the directing staff, they proudly admitted that to a man they had all received their training from the Soviets and were all former KGB officers.

And two... Dumbo thinks we are all as dumb as he is. Like when he insisted today that a Corrections Canada operative had visited Torture Prison and declared it A-OK.

And when did that operative visit the prison? Answer: just recently. And when did the scandal take place? Answer: in 2006 and 2007. And now we know that the problems continued this year.

Which leaves me with one question for Dumbo: Can you rule out that an innocent Afghan farmer who was brutally tortured and then released, WOULDN'T join the Taliban to get even with those who delivered him into the hands of those bestial torturers?

Could that help explain the increase in the number of deadly attacks on our troops in 2008 and 2009?

And one question for this guy... 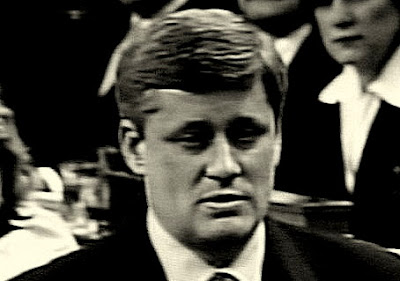 Why do you take torture allegations so lightly, you turned your back on Parliament today to attend a cheap photo-op?

And isn't that the same callous attitude what led to the torture scandal in the first place? The one you are now trying to cover-up.

Even though this hideous scandal is covered with your grubby fingerprints.

Prime Minister Stephen Harper's office used a "6,000-mile screwdriver" to oversee the denial of reports of Afghan detainee abuse when the scandal first erupted in 2007, according to a former senior NATO public affairs official who was then based in Kabul.

It was highly unusual. I was told this was the titanic issue for Prime Minister Harper and that every single statement that went out needed to be cleared by him personally..."

Hmmm. Do you think Stephen Harper is running SCARED? I do.

Just leave the piano at home. Your lies finally caught up to you.

I watched O'Connor and listened to Harper's pinocchio boy and O'Connor made a lot of strange, painful faces today, some might say he was responding to some of Pinocchio boy's comments with incredulity. I actually felt sorry for the old guy.

It is funny but long ago I learned that if someone heavily points out someone elses flaws, or as the cons do, scream about cut and run or law and order, it is those people who you can expect to see do what they claim other are doing.

Is it just projection? I don't know but repeatedly I've seen it.

Ever had a co-worker promoted to boss? Then they comes down with all sorts of rules to prevent all the ways they were screwing the system, gets all paranoid because no one breaks the rules, then start accusing people of... fer instance... not showing up on time or something? I've seen so many people like this it isn't funny.

They are pants-pissingly scared that everyone is out to get em or cheat them but only because it would be what THEY would do.

I think the cons are a perfect example of these types of people.

Are you referring to former lobbyist for the arms-dealer industry and Defence Minister Gordon O'Conflict (of Interest)...? I have fuck-all sympathy for a scum-bucket like him; he has more than enough blood on his hands to despise him.

hi Peter...I know the kind of people you mean... :)
And in the case of these Cons it's become almost pathological.If you accuse them of making up down. They'll trn around and accuse you of making down up.
And then they repeat these obvious falsehoods over and over again like the Big Lie.
These base creatures think because we're not bullies like they are must mean we're weak.
I can hardly wait to teach them that decency is a virtue and it comes with a sharp end... ;)

hi anonymous...yes I couldn't help notice that as well. I have no sympathy for the arms lobbyist, but he's probably old school enough to be better than these Cons. And of course I would forgive him almost everything if he decided to testify against them... :)

hi 'berto...I see you don't like Gordie much. I don't know when I look at the pained expression on his face, and I think O'Connor, I can'y help but think of SARDINES... :)