The Harper Cons and the Vaccine Nightmare 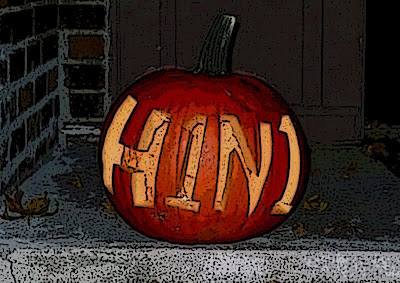 As I was saying the other day...who needs Halloween when we've got this horror show?

But let's be very very clear who is mostly responsible. It's NOT our public health workers, who are doing a heroic job trying to cope with a wave of panic that is overwhelming our already overworked public health system.

And the provinces shouldn't bear the burden of the blame either. They can only give out as much vaccine as they get from federal authorities. And they don't have enough vaccine because our Con government made an almost unbelievable MISTAKE.

They ordered the vaccine manufacturer to make an enormous order of non-adjuvanted vaccine. But apparently were unaware that because the H1N1 virus grows slowly, a rush order for one type of vaccine would cause a major shortage of the other.

Even though they should have know that the WHO were about to complete a study showing that vaccines with adjuvants were safe enough for EVERYONE.

Now look... there is enough blame out there for just about everybody to get a bit of it. Like the people who are demanding to get vaccinated even though they are not in a high-risk group.

They believe OUR health is a purely provincial matter. But since the HarperCons forgot to tell the Swine Flu bug to respect those provincial borders, now we're in this mess, everybody is panicking or getting angry.

And it all could have been avoided if these Cons had put the safety of Canadians before their hideous alien ideology, taken a leadership role in a NATIONAL emergency, and launched a massive ad campaign to educate the public and prepare them for the second wave of the pandemic.

But instead of preparing us for this pandemic, what did our Cons do ?

Answer: Blow their ad budget trying to buy themselves a MAJORITY.

By spending gazillions of OUR tax dollars deluging us with commercials about their Porky Action Plan.

And if you think that's a nightmare....

Thanks to these rabidly ideological and incompetent klown porkers most of the population won't be vaccinated until well into December. And since the Swine flu could surge in the next few weeks, November promises to be an even darker month than it normally is...full of sickness and fear.

Tell your friends. Tell your neighbours. Tell everyone you can. Stephen Harper is definitely NOT a leader. Canada is a COUNTRY not a collection of provinces.

And these Cons have GOTTA go...

I caught Butler-Jones and Agluquack earlier today on Question Period. Both did miserably during their interviews with taber and Oliver respectively. Agluquack and Butler-Jones both shifted the blame to provinces. It sounded like Master Steve pulling those puppet strings.
I think the both of them and the rest of their ilk should resign

Here's hoping this vaccine dilemma will change some of those voters opinions about the Cons.
I saw Harper on TV at the torch welcoming ceremonies in Victoria.
Ever since that singsong of a Beattles' tune and piano play with YoYo Ma in Ottawa he's gotten fuzzier and cozier in his image and manner. This is scary.
Now his message is: "See: I'm a really nice guy!"

hi lilian...I realize these days, with the Cons riding high in the polls, saying "the Cons have gotta go" may sound futile to some people on the progressive side. But I refuse to give in to despair, and the more I say it the better I feel ... :)

hi CK...believe me the Cons are squirming about this one. As Kinsella mentioned the other day, you can SMELL the fear.
Harper,with his background and his views on national government,is in a particularly vulnerable position.
So if we can keep the message SIMPLE: Con = Porker. Buying a majority was more important to them than saving us from the flu etc etc. If our leaders pick up this pig scandal and run with it I think the Cons could come down with a bad case of PORKY flu. It doesn't kill you, but it sends you back to Alberta... :)

hi Oemissions...as I just told CK I have high hopes for the Swine flu AND the Porky Action Plan scandal. But of course it depends on whether Ignatieff and Layton can get the crude message across to the rabble out there: These porky Cons are screwing you with YOUR money, and because they don't believe in a strong national health system, now they could really KILL you...
Because in the kind of country they have turned Canada into, subtle will get you NOWHERE...

All I have to say is, the U S appears not to be complaining of vaccine shortages anymore. Where has all the Canadain vaccine gone?

And I supose the vacine shortage has nothing to do with the fact that the last Lieberal government sole sourced it to a Quebec company.
That's right... instead of having two or three companies pumping out the needed vacines they gave the 323 milliond dollar contract to a single supplier. Who then gave them a nice fat contribution.
Besides, do we even have enough doctors to keep up with the number of people screaming for shots? They have to go home and sleep as well.