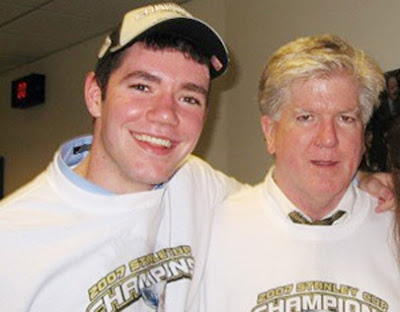 But now, although it's painful, I have to admit he's a really neat dad.

Because this is one of the best coming out stories I've ever read.

He calls you "Moose" because you have always been a big kid. He cares very deeply about you and your happiness. You say he has always been there when you needed him. And he has a great sense of humor. Imagine that.

But on this night in 2007, you are petrified of your dad. Because you, Brendan Burke, at 19 years old, are about to tell your dad, Mr. Testosterone, that you are gay.

But what does Mr. Testosterone say?

I wish this burden would fall on someone else's shoulders, not Brendan's. Pioneers are often misunderstood and mistrusted. But since he wishes to blaze this trail, I stand beside him with an axe! I simply could not be more proud of Brendan than I am, and I love him as much as I admire him."

I stand beside him with an AXE. How many gay boys hoped they'd hear that from their fathers but didn't.

So imagine how gay boys who love sports feel when they hear Brendan say this:

"Imagine if I was in the opposite situation, with a family that wouldn't accept me, working for a sports team where I knew I couldn't come out because I'd be fired or ostracized. People in that situation deserve to know that they can feel safe, that sports isn't all homophobic and that there are plenty of people in sports who accept people for who they are."

Because he speaks for all of us.

Of course, it will take a lot more than that to rid sports of homophobia. But every step counts.

That was a great story to end this week on, Simon. Beautiful. Thanks! You know, the Christian Right who are intolerant, can have all the platitudes they want, but if they have not love--they're just clanging cymbals. I feel sorry for them, for what they're missing. Cheers. LK

But Simon, don't you find this to be a bit incongruous?

"I would prefer Brendan hadn't decided to discuss this issue in this very public manner. There will be a great deal of reaction, and I fear a large portion will be negative. [...] There are gay men in professional hockey. We would be fools to think otherwise. And it's sad that they feel the need to conceal this. I understand why they do so, however. [...] I wish this burden would fall on someone else's shoulders, not Brendan's."

... as in the incongruity of Brian saying that it's such a shame that gay athletes feel the need to stay in the closet, yet in the very same breath he's saying that he wishes Brendan hadn't been so public in his declaration. Ummm... cognitive dissonance there much, Brian?

I can understand if he's a bit worried, but he should be PROUD that his son is such a mature and courageous man -- it's a credit to the way he was raised, I'd think.

hi LK...thank you I liked it too :)
It had every stage in a gay boy's coming out. First Mum and the sisters, then your brothers, and then finally Dad !! Sadly many times it's not as sweet as Brendan's. But when it is it can be AWESOME...

hi 'berto...since by all accounts Brian Burke loves his son I understand why he said that. If I had a son and he came out I'd be happy and proud of him, but I'd be worried about him too.
On the other hand what I found hilarious was when Brendan told Brian and Burke Sr calmly went back to watching TV.
Only a dad could do that... :)