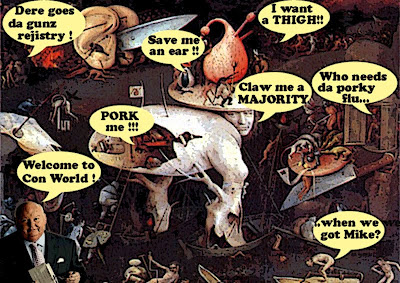 OMG.Thank goodness the week is finally over. It was horrible. The defeat in Maine, the sight of the Reform Party back in the House of Commons.

But at least it wasn't half as bad as the week Stephen Harper and his political thugs just had. Because that was a real DISASTER.

First there was continuing meltdown over their failure to prepare the country for a pandemic. Even as the swine flu continues to spread.

Then there was the bad economic news.

But of course now they can't...

Because after that simple illustration of the Porky Action Plan even an idiot can figure out what's going on. Allo police?

Then there was the way they hacked away at the Gun Registry to please their rabid gun nutz base. Even though that means police officers will be in danger...and even more women will die.

Long guns are the most common type of firearm used in spousal homicide, according to the RCMP. With restrictions in place against them, the number of women murdered with firearms dropped by 62 per cent between 1991 and 2004.

So now they're not "crimebusters" anymore. Just misogynist bastards and friends of criminals.

Then there was the horrible sight of Tubby Van Loan trying to avoid explaining why he hid an RCMP report on guns, until AFTER the registry vote. Sweating like a pig while trying to dodge questions from reporters..

And finally to put a cap on this disastrous week in Con World ....like a cherry on a sundae... there was Puffy Duffy jumping the shark.

To show us all what these Cons are all about. And how low they can go.

Golly. What more can we ask for ?

Or the karma police will get ya...


Ooh I love that toon. I've been waiting to sing for so long.

This is what you'll get when you mess with us.

Have a great weekend everyone !!
Posted by Simon at 1:32 PM

I'm sozzled MS, thank god. You have a good one too.

Is it *necessary* to constantly make fun of Duffy's weight every time you mention him? Or, for that matter, to ridicule Harper, or Van Loan, or whomever else for their weight? There are LOTS of things to attack them about, and making "fat jokes" not only seems un-progressive, I think it demeans you. You're better than that, Simon.

hi anonymous...yeah I know I know it's Saturday. I wish I could get sozzled. But unfortunately I don't drink, and with Canada in the state it's in it would probably take more than that to numb the pain. You don't have any morphine do you? ;)

hi 'berto...I didn't really think I had made fun of his obesity. Calling him Puffy speaks to more about him than his weight. Like a puff fish or something.
As for Van Loan he is known by his colleagues as Tubby. I just find the name funny, but again I honestly wasn't thinking about his weight. If I wanted to insult him I would call him a fire hydrant...the kind my dog likes.
But I take what you say seriously, some of my best friends are fat, and I'll be extra careful not to make it appear that I'm not making fun of anybody because of their physical appearance. Because that would be wrong, and you're right I am better than that...

Simon: "... it would probably take more than that to numb the pain. You don't have any morphine do you? ;)"

I was going to make a comment on the weight thing as it does seem an excessive theme in your work. I've been beaten to the comment though and applaud your reply.

Further food for thought, eating disorders and body image problems are already a big problem. Identifying anyone by their looks will almost always make such problems worse. It is human, and animal, nature to be drawn or repulsed to someones looks.

Unfortunately, it does seem that people like Duffy and Harpo who do seem to have impulse control issues give the stereotypes of fat people so much life.

Thanks for taking this under consideration! If it is any consolation I've removed many other major prog blogs from my regular reading yet you remain. I think you speak with a clarity yet without the absolute certainty of an ideologue. Thinking and being open, it is a good thing and I appreciate reading it!

hi Peter...thank you for your comment. 'Berto treats me cruelly but sometimes he teaches me some good lessons.
The truth is I have made fun of Harper in the past because of his big tummy. I only did it because the Cons manage his image so closely and he's so vain.But that's no excuse, there are so many other reasons to make fun of him, without picking on the one thing he can't do anything about.
And I do know better because in high school overweight kids were bullied almost as much as I was. I stood up for them then,so why wouldn't I do it now?
Besides as my companion recently pointed out, since I gained ten pounds this summer because of all the rain...and too much blogging...who am I to call anyone chubby? :)