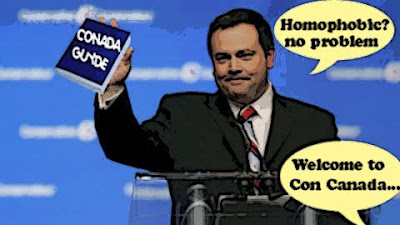 There are some things I like about Jason Kenney's new Con citizenship guide. Like the big colour picture of Les Canadiens at the top of the sports section.

"In Canada, men and women are equal under the law," the document says. "Canada's openness and generosity do not extend to barbaric cultural practices that tolerate spousal abuse, ‘honour killings,' female genital mutilation or other gender-based violence. Those guilty of these crimes are severely punished under Canada's criminal laws.

But as for the rest of this Con Canada Guide it's just another crude attempt by the Harperites to remake the country in their image. As even John Ivison admits.

It might easily be dismissed as a glossy brochure, but that under-estimates the thought and effort that went into it. This is not tinsel, it's symbolism and is yet another incremental step in the re-branding of Canada into a conservative country, full of people more inclined to vote Conservative.

Full of nods to their rabid Reform base, and ethnic communities they hope to win over. Lots of stuff about religion and religious freedom. And absolutely nothing about the human rights of gays and lesbians.

Even though some immigrants come from countries where it's OK to persecute them...or even kill them. 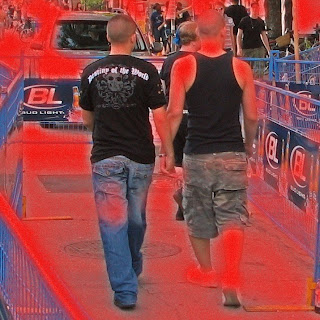 But not our Cons because they are homophobes themselves. They are not only openly discriminating against gay and lesbian Canadians, and fuelling a violent anti-gay backlash. Now they're trying to write them out of the fabric of Canadian society.

And there's no bigger SoCon homophobe than Our Lord of Perpetual Chastity Jason Kenney.

The fact is that homosexuals aren't barred from marrying under Canadian law. Marriage is open to everybody as long as they're a man and a woman."

And no bigger IDIOT...

Except that it's not funny,because his failure to screen out homophobes could endanger OUR lives. And deprive us of the right to live and love in peace in our own country.

You know I'm surprised that more people didn't notice how gays and lesbians had been erased from the Citizenship Guide.

But at least he did.

They are changing our country beyond recognition.

Anyone just weeks removed from steerage who reads the new guide will think Conservative values of unabashed patriotism, pride in the armed forces and support for the rule of law are synonymous with Canadian values.

And the divided left is too IMPOTENT to stop them.

But at least nothing these Con thugs do surprises me anymore.

There's the mention about equality under the law but the book is strangely silent on WHY the court challenges program was cancelled.

An explanation about how and why the Cons decided that only those with money could challenge the status quo would be in order but the Cons are too cowardly to own up to that little scary decision.

And that's just for starters! Sure is more to come from other readers, I hope.

Y'know, Simon, you keep talking about the "divided left", but a recent poll found that the second-place choice for most Liberal voters is... the Conservatives (or, as I call them, the Harpokons).

Based on this rather inconvenient fact, I'd say Harper is still not finished "uniting the right".

'Coz let's face it: the Harpokons are the über-right, the Liberals are centre-right, the NDP (disgustingly enough) are centre-left, the Bloc is whatever it needs to be in order to hold onto its seats -- but is nominally centre-left... and there IS no truly "left" federal party out there. (And please don't say "the Greens", because between former leader Jim Harris and "It's all about MEEEEEEEE" May, the Greens are nothing more than Progressive Conservatives with composters.)

I don't get any pleasure from saying this; I vote NDP by default, but I dearly WISH that there was a real leftist alternative out there to support -- at this point the best hope we have left is another schism in the far right party á la the Reform party, or the Wild Rose Alliance. Until and unless that happens, Harper is going to continue to ride rough-shod over us, with the grudging acceptance of most Canadians -- even Liberal voters.

When you say left do you mean Libertarian?

Because all parties in Canada except the Bloc are clearly to the right.

My problem is I am fiscal conservative social liberal. And in no way shape or form do I mean Liberal or Conservative parties.

I can't support the NDP im curious have you read there charter?

hi Torontonian...I'm always in favour of teaching people more about Canadian history, but this Con Guide strikes me as a throwback to another time. For example there's not enough about our peacekeeping, and far too much about the First World War.
As for the court challenge program...I wouldn't expect the Cons to own up to that one.
But you'd think they'd have the decency to note that in Canada homosexuality is legal and gay people cannot be insulted or attacked.
So they know where they're going to, because we're not going anywhere...

hi 'Berto...you know it's funny every time I write that I always hesitate. For all the reasons that you mention, and one other.
I always assumed that Canada was a centre-left country, but now I'm not so sure. What I see is similar to what I see in Great Britain. If Scotland seceded the rest of Britain would be a right-wing country. Because if Quebec seceded the same would be true here.
What I'm not sure of is what exactly is happening. I know that Quebec is becoming a bastion of those collective Canadian values I thought we all shared because it's...um...a collective. Still a society united against an external cultural threat, like English Canada used to be faced with the threat of cultural assimilation from the United States. But now that's changing. Maybe it's the inevitable effect of that American culture more omnipresent than ever due to modern technology. Or maybe it's a demographic one. Canada had one of the highest number of baby boomers relatively speaking. Now they are getting older...and that usually mean more conservative. The other factor is whether our large number of immmigrants atre also contributing to that conservative wave...particularly on economic issues.
Then of course there is the fact that in a more polarized country one really has to wonder whether the Liberal Party will be torn apart from both extremes. And that eventually we will end up with one right-wing party and one left-wing party, unless we get proportional representation but that's another story.
I hope I'm wrong about all of this, but I've always believed that demographics is destiny.
And right now it doesn't look good...

What a great web log. I spend hours on the net reading blogs, about tons of various subjects. I have to first of all give praise to whoever created your theme and second of all to you for writing what i can only describe as an fabulous article. I honestly believe there is a skill to writing articles that only very few posses and honestly you got it. The combining of demonstrative and upper-class content is by all odds super rare with the astronomic amount of blogs on the cyberspace.