The Afghan Horror and the Pig's Head 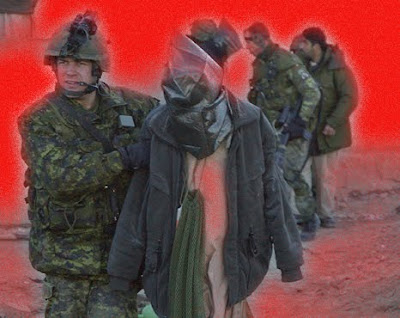 I always knew this mission would end badly. We never had enough troops to do what we said we wanted to do. And the longer an occupation goes on the more it corrupts.

But I never imagined that a Canadian government would refuse to hold a public inquiry into allegations of mass torture.

Claim it didn't know anything about this atrocity...when it obviously did.

And would attack the one Canadian who refused to be corrupted, and did the right and decent thing, in this foul manner.

MacKay painted Colvin as having been duped by the Taliban and said Canadians are being asked to accept the word of prisoners "who throw acid in the face of schoolgirls."

When by continuing this cover-up, these immoral Cons are corrupting the reputation of our army, dishonouring the dead, branding us as a Torture Nation in the eyes of the world, and making a mockery out of our mission.

Canada has had an image as a liberal Eden since Thomas Edison did his light-bulb thing. The image is not yet undone. One need only look at the big-spending, deficit-building spree of today's government. But the old conception of Canada is at risk, threatened by an emerging conservative consensus that no one 10 years ago could have foreseen.

Our old voice of moderation – on the Suez crisis, on Vietnam, the arms race, the Cold War, on peacekeeping – is no longer much in evidence. And Canadians don't seem to mind.

Quebec remains a bastion of traditional Canadian values, but everywhere else they are dying. Stephen Harper doesn't even have a majority yet, but I feel I'm already living in a country I don't recognize.

And worse than that....on days like today when I hear analysts on TV say that this torture scandal won't hurt the Cons...I think of that scene in Lord of the Flies.

When that other Simon stares at the pig's head, and asks who is The Monster who is scaring the boys?

And turning them into savages. 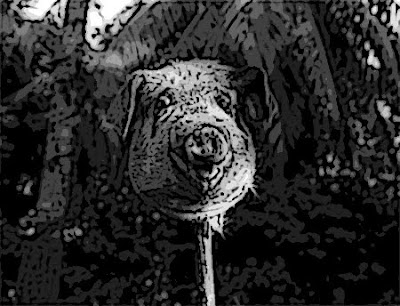 And the pig says the monster is THEM.

Progressive Canadians really need to get their act together. We need to explore new ideas. We need to create a mighty coalition to clean out these corrupt alien Cons.

Because our country is slipping away. Time is running out.

And the monster is among us...

The first duty of any PM is to protect Canada's best interests and we haven't seen that in 4 years (more), but most especially the last 4 years. Harper has betrayed its citizens and the country. He is contemptible and subversive to Parliament. His day will come, but only when enough Canadians WAKE UP! Let's hope this horror does the job.

"One need only look at the big-spending, deficit-building spree of today's government."

Because spending money is a liberal trait or somehow progressive? Talk about framing an argument. Big spending for no gain is what the so-cons are all about. It is simply another way to destroy what they think is "evil".

I've been pondering a post entitled "Do you still recognize this country?" No one on the left thought that the cons would come right out and change Canadian identity. What we know is that Canada, like any good thing, needs to be nurtured and grown in order to be harvested as the best country in the world. Put someone in charge who either through neglect or desire for a different crop and what do you get? A Canada involved in torture.

Speaking of the Globe and Mail I was curious at the comments regarding obsolete equipment for the troops being all Liberal's fault. (And they can be blamed if that is your thing) I'd like to know how all the NEW incompetence and political idiocy which has been interfering in updating the troops arms and armor turns into "We support the troops!"?

But I'm not bitter, yet.