The Rise and Fall of Michael Ignatieff 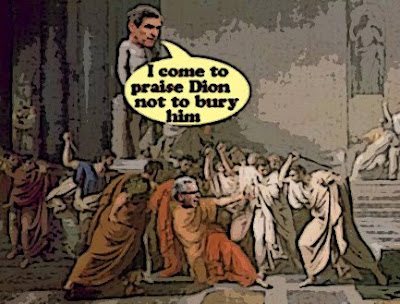 He stabbed the Coalition for Change in the back... and made a deal with the werewolf. 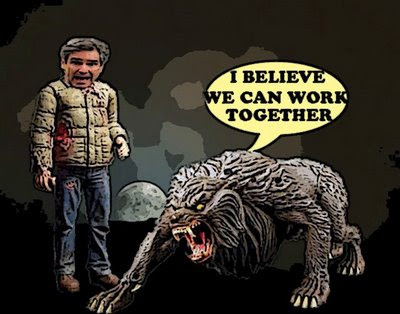 He supported Harper so many times...and took his party so far to the right you couldn't distinguish it from the Conservatives. 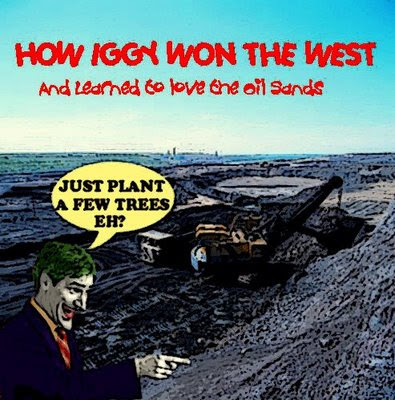 Then he took the summer off to do...um...something. 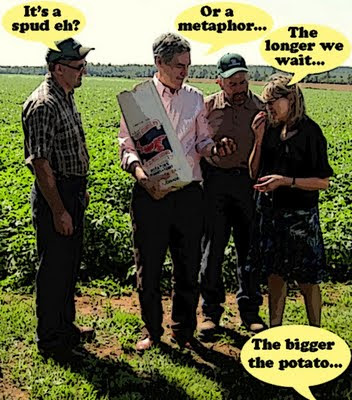 And when he came back he went into the woods to make some boring ads...although this one was pretty exciting eh?

Only to emerge and declare that he didn't like the werewolf anymore, and wanted an IMMEDIATE election.

One he couldn't possibly win... 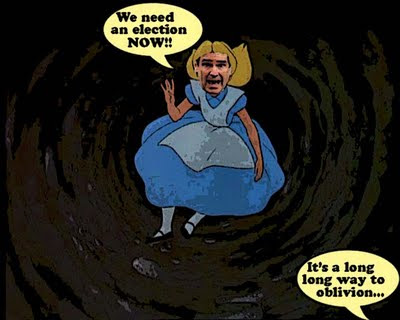 And here we are now.

It's like he went from being the messiah to being the village idiot.

And what I want to know now is will he FIRE his idiot advisers? Every last one of them.

Will he kiss Jack Layton's ass...on one cheek or BOTH for preventing him from committing political suicide ....and handing Stephen Harper a majority?

And is he now prepared to do to Harper, what Great Ugly Leader did to him? By launching the most vicious attack ads this country has ever seen.

Or should I prepare to play this song?

For him and for Canada...

Because let's face it we are facing a REAL apocalypse...

Can he recover? Maybe. I hope so. But it won't be easy.

Because one more Iggiot mistake and there won't be much left of him.

Hi Simon, I'm shaking my head here. Like yourself, I'm feeling pretty dismal myself, especially after reading the EKOS polls this morning.

I also read that Petey told the CBC today they were planning to stay in Afghanistan longer than 2011 deadline; 'in a non-combat role'. Read my posting this evening to see if I'm fooled by it.

On a lighter note, I love your cartoons.

Oh, & Simon, I meant it: if you & Sebastien & your other friends & family come up with the cash: please buy the Gazette & turn it into an intelligent newspaper that won't set off one of my migraines.

If my husband & I had the cash; I know we would buy it & turn it into something we could be proud of.

Sorry to get off topic

"Stabbing the coalition in the back" is a bright spot for "Iggy". Who would want to align themselves with self-righteous blowhards who have a less than zero chance of ever governing the country?

Christian, your comment, "Who would want to align themselves with self-righteous blowhards who have a less than zero chance of ever governing the country?"

Too funny, coming from a Green Party supporter with no seats either federally or provincially.

That said, Simon was a supporter of the coalition.

Hi CK...yeah I know how you feel...I'm writing this lying down because I don't have the strength to stand up...
And yes I did see that Assghanistan story. Excellent. Praise the Lord and pass the ammunition...
As for The Gazette...I only have fifty bucks in my piggy bank, but I'm buying a lot of lotto tickets... :)

hi Christian...look I hate to be a bearer of bad news but the Coalition will be back sooner or later. And when it does return it will ERASE the Cons from the electoral map...probably FOREVER.
As for Jack Layton he may not be perfect but at least he has principles which is more than I can say for your leader.
And there's no herd quite as docile as the Con sheep. Baaaaaa :)

hi Jan...I'm glad you liked it. As I told CK I was too depressed to write anything too deep, so I put up some of my primitive "art" instead.
But thanks for pointing out that Christian is a Green supporter. I assumed he was a Con. Sorry Christian. I don't want to say anything bad about Elizabeth May because she's a nice person. And if I ever met her I'd just ask her one question: WHY? ;)

i just couldn't grasp him, not since his emergence from harvard and england and back into canada. iggster is just another pretty boy with a white picket fence up his butt while he waffles, waffles, waffles.

when will the libs put bob rae in?

Simon said: "But thanks for pointing out that Christian is a Green supporter. I assumed he was a Con."

That's pretty much all the Green Party is in this country though, Simon: "free market" Libricons, or as my friend calls them, "Conservatives with composters".