Hooray for the Kids in the Commons 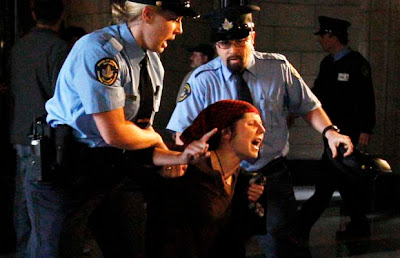 Wow. What a sight in the House of Pork. A young flash mob in the visitors gallery and blood in the corridors

And all I can say is good for them. At least some people in this incredibly passive country are willing to get off their asses and let the politicians know we DEMAND they do more to save our burning planet.

Because Stephen Harper's dirty oil government isn't even PRETENDING it wants to do anything to fight global warming.

Canadians must also recognize that any national emissions cap has to reflect differing conditions across the country so as not to punish high-growth provinces, he added. The minister has been consulting with provinces on a plan that would impose a cap on industrial emissions, but allow Alberta's energy-intensive, emissions-heavy oil sands to continue expanding.

And these Con oil hogs ....you know the Calgary Gang....are actually planning to waddle off to Copenhagen and shame us in the eyes of the world. By telling other countries we can't do it because we...um...CAN'T.

And they're counting on the complacency and selfishness of Canadians to get away with this crime against the planet.

So if some young Canadians feel they need to make a bit of noise to remind the politicians that they need to do better. I say go for it. It's THEIR future that is being torched. This country is dying of smugness. So the more noise the better.

Time is running out. Those Con oil hogs and planet destroyers need to hear our anger.

And the time for action is NOW !!!

I say 'Hip hip hooray!'too!
Too bad that Harper wasn't there .

Now, if we can use that same energy to fight for our single-payer health care system which is very much in danger. Ask the folks in Alberta, with all Stelmach's cuts to pave the way for US health care

hi Oemissions...yes it was too bad. Although maybe it's just as well for the safety of the demonstrators.
If our Little Napoleon had been in the Commons they probably would have been tasered ...or shot.
I keep hoping that Canadians will take to the streets to protest against this government, so hopefully this protest will lead to many others..

hi CK...that comment of his that he doesn't watch Canadian news still has me shaking my head.
The way I see it he's either a liar or an idiot. Or both... ;)

Speaking of oil mongers...you know they've been trying to get a pipe line up here for decades, now. Why else would Harper visit us every year? For the wild game?

hi Jason...yes everything Harper and his Calgary Gang do is for the benefit of Big Oil...and the United States. Because they want to pipelines everywhere, not to serve OUR needs, but just to pump all that dirty oil all the way to the south of the U.S....and all the way to China...