My Letter of Apology to Stephen Harper 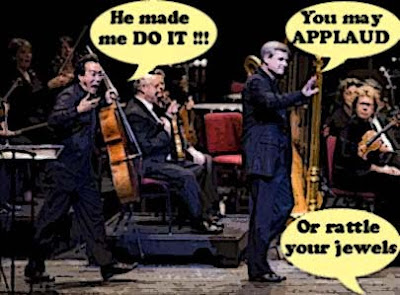 As you probably know I am not one of your biggest fans. I believe you are the worst Prime Minister in Canadian history.

And that your cheap cabaret act last night at the NAC Gala, not only demeaned the office of Prime Minister, but also insulted every starving artist in this country by suggesting you were one of them. When everyone knows you HATE them.

And that whatever ridiculous nonsense your legion of media sycophants may spout.

Nothing can change the fact that by forcing yourself on the Gala....or excuse me.... having your wife force you on the event.

The whole thing began to take shape a month ago when Mrs. Harper approached Jayne Watson – chief executive officer of the National Arts Centre Foundation, which hosted Saturday's gala to benefit youth in performing arts – about putting the Prime Minister on stage. “She said, ‘What would you think if I asked my husband to perform at the gala?' I said, ‘That would be fantastic and unexpected! Of course,' “ Ms. Watson said.

Even though she's the honorary chair... and what's poor Ms Watson to say? "Oh God no, what a hideous and horrifying idea...the artists would never forgive us?"

You not only demeaned the event by turning it into a vulgar campaign stop, you revealed the depth of your hypocrisy, your complete contempt for the arts, and of course that you'll do ANYTHING to try to fool idiot Canadians into giving you a majority. So you can screw this country like a donkey. Pardon the expression eh?

BTW did you ask those rich people at the Gala to applaud...or just rattle their pearls ?

On the other hand, although we obviously have our differences, I do try to keep my criticisms of you within the realm of what your good buddy Tom "Strangelove " Flanagan calls the truthful.... or the merely plausible. And unlike you I am man enough to admit it when I make a mistake.

So you know when I said in my post last night that this was the worst Beatles cover EVAH ?

Well I want to apologize. Because I was WRONG.

After consulting with an international panel of experts, and doing extensive research. And after finally convincing my dog that those horrible sounds you made were NOT Sally the golden retriever next door calling out to him.

I have concluded that you don't even deserve that lowly award.

That is if you haven't got a majority by then, and shocked your idiot groupies by turning the National Arts Centre into a beer garden.

Here's hoping you never do. Here's wishing you the worst campaign EVAH.

Simon, don't you find it odd that none of the MSM or the radical-right-wing has made an issue of one of the repeated lines of the referenced tune?

"I get high with a little help from my friends."

It appears to be a ringing endorsement of drug use to me.

Simon, did you send that letter to him? Would you?

Sounds like the sort of a thing to be expected from a Conservative Prime Minister.

Just remember when our Rt Hon Brian Mulroney was on stage with US President Ronald Reagan singing 'When Irish Eyes Are Smiling' on the stage of the Grand Theatre at Quebec City's Shamrock Summit in 1985.

Just saw that sailor marching band worst ever Let It Be version. OOOFFFF!!!!! I couldn't listen past 20 seconds of it.
Was this done to be purposely awful?

Simon, Pale @ acr edited & did some tweaking to ol' Stevie video of him croaking or lip synching! Catch it Here: http://www.acreativerevolution.ca/node/2110. I don't think you'll be disappointed.

hi West End Bob...yes as I pointed out in my first post about this sorry event it's so hypocritical, when he's planning to jail even more people for drug "offences."
However, knowing the Cons I'm sure the song was focus tested for maximum impact.I'm afraid I'll never be able to listen to a Beatle's song again without thinking of Harper. The Man is a MONSTER !!!! ;)

Hi CK...absolutely not. Do you think I'm crazy? I hope to avoid being sent to a Re-Education camp until he gets a majority... :)

hi myverygaywedding...yes I do remember that hideous song. I consider it the most shameful and cringing episode in the history of Canada-U.S. relations. But at least Mulroney could sing... :)

hi CK...oh I think you're being too cruel. At least the man has a...um...big voice. And didn't you love the uniforms?
If we could get Harper into a sailor's costume ...or a cowboy one...I wouldn't mind him singing ANYTHING. I could put earplugs in and LMFAO... ;)

P.S. I did see pale's video and it's awesome. In fact it inspired me to make my own...