Obama, Rabin, and the Fascist Nightmare 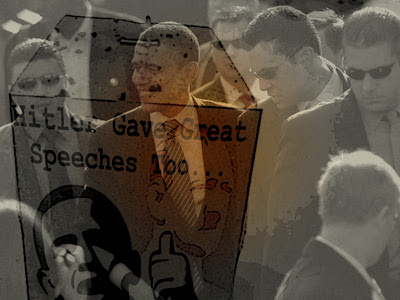 When I read how the hatred being spewed at Obama by deranged right-wingers reminds Thomas Friedman of the lead up to the assassination of Yitzak Rabin.

They questioned his authority. They accused him of treason. They created pictures depicting him as a Nazi SS officer, and they shouted death threats at rallies. His political opponents winked at it all.

I have no problem with any of the substantive criticism of President Obama from the right or left. But something very dangerous is happening. Criticism from the far right has begun tipping over into delegitimation and creating the same kind of climate here that existed in Israel on the eve of the Rabin assassination

And how he wonders where the WE went in Amerika.

And then I read Gore Vidal on what he thinks will happen.

We’ll have a military dictatorship fairly soon, on the basis that nobody else can hold everything together. Obama would have been better off focusing on educating the American people. His problem is being over-educated. He doesn’t realise how dim-witted and ignorant his audience is.

And what he thinks was Obama's biggest mistake.

Obama believes the Republican Party is a party when in fact it’s a mindset, like Hitler Youth, based on hatred — religious hatred, racial hatred. When you foreigners hear the word ‘conservative’ you think of kindly old men hunting foxes. They’re not, they’re fascists.”

I fear for Obama I really do. If the Secret Service had a fan club I'd join it. But I also fear for Canada.

Where so many Canadians are so ignorant they believe Stephen Harper is the best leader when it comes to environmental issues. You know the dirty oil pimp from Alberta.

And so many progressives still don't realize who we are up against. And what could happen if these Cons ever get a majority. Even though they treat their opponents like enemies who must be destroyed. Even though they are destroying the WE that once was Canada. Even though their rabid base would turn this country into a fascist place.

But sadly so many people in Canada and the United States don't see the danger. Don't think it could happen here.

The writing is on the wall, but they can't read it. The fascists are all around us.

A total nightmare. I'm not sure if you caught that newsmax editorial yesterday about their columnist John Perry's musings of a coup d'etat in the US; a military rule taking over the Obama Presidency. That is if he ain't assasinated first: Secret service had to request Facebook to remove a poll on whether or not he should be assasinated, but not before 750 people voted. You can catch all this on my piece as well as the links including the original posting by Perry which Newsmax removed.
http://sistersagesmusings.blogspot.com/2009/09/coup-detat-in-us-of-all-places.html

Makes you wonder how degenerated not only the extreme right in the U.S. has become.

Yeah, this is no joke. When I say that Obama will be killed one day, most people laugh--but I mean it seriously. The right wing in America is radical, because what we in Canada (used to) know as the right-wing is what the Democrats are. As Bill Maher said, "The Democrats have moved to the right, and the Republicans have moved into an asylum." Which isn't really that funny considering those people in the asylum are running around with guns…