Why Cheque-Gate is Worse than Adscam 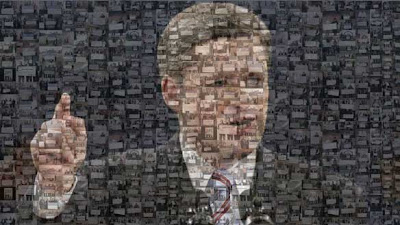 I love this collage. It just about says it all. About their thug mentality... and how low they are prepared to go. Stephen Harper and the Big Cheque Gang. Buying votes with OUR money.

So I'm glad the Liberals and the NDP are going after them.

But I don't understand why so many are letting the Cons get away with the argument that Adscam was worse than Cheque-Gate.

Asked about suggestions from some Conservatives who say this issue is nothing compared to the Liberal sponsorship scandal, McGuinty said: "That was then, this is now. We dealt with it, had an inquiry and as a Parliament we passed the Accountability Act. We were supposed to have a fresh start in 2006."

Because let's be blunt. The Liberal sponsorship program ...as stinky as it was... was just a chintzy get-rich quick scheme for some corrupt Liberal officials and ad agency losers.

While the selling of this Con Pork Action Plan is a massive multi-billion dollar attempt to corrupt our democracy.

You can't get away from these ads. They're EVERYWHERE. Even on the Health Canada website... 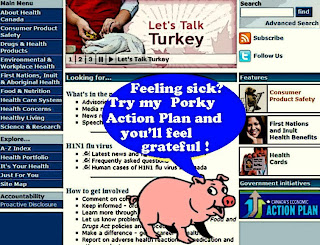 Can you believe it? Pumping up the economy by playing the PIANO? I know these shameless Cons think they're Super Nerds, but do they think we're IDIOTS?

Yup.There can be no denying it now. Stephen Harper and his Big Cheque Gang have turned a government program into a propaganda branch of the Con regime. And are trying to BUY themselves a majority.

Can you imagine what these political gangsters might do if they ever got that majority?

Can you imagine how Canadians might react if they felt the next election had been STOLEN? 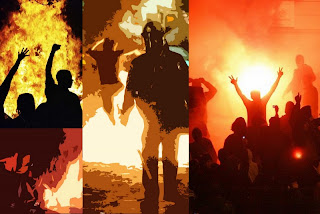 You know.... I don't think our country and our democracy can afford to let Stephen Harper and his Big Cheque Gang get away with it any longer.

Complaining to the Ethics Commissioner is a good start. But before any election can be held.....if we can't get the police to arrest these Cons.

Simon: Can you, or someone who know more about Adscam, please clarify. My impression was that of the three people (or more?) who had been charged/convicted, two were Cons and one was Lib. Is this correct or wrong? Thanks.

Ano-it doesn't matter, the Cons/Liberals lie about everything. It's obvious they care nothing for the 'people' and their feelings or ideas. It's plain we have literally nothing to say anymore. What do you think of that, more importantly.

" ... C-27 is the Canadian anti-spam bill that comes out of committee on Monday. The opposition Liberals have proposed amendments which appear to have been drafted by copyright and telecom lobbyists. They would allow for surreptitious installation of computer programs and - even more outrageously - would allow copyright owners to secretly access information on users' computers.

The bill contains an anti-spyware provision, yet the Liberal motion would allow for the collection of personal information on a computer without authorization if the collection is related to a "investigating a breach of an agreement or a contravention of the laws of Canada." Note that that is private sector surveillance, not the police.

On top of these provisions, the Liberals have also tabled motions to extend the exemptions for telecom providers including allow telecom providers to engage in a host of activities - right down to scanning for and removing computer programs - without permission."

To quote a couple of readers at boing boing:

"... I don't have much faith in our current federal parties but I really did not expect to opposition to go above and beyond being complicit and actively make the draft worse."

"What the hell? I thought evil shenanigans was only the domain of the Conservatives. I'll be sending a letter promptly."

just get these people out to vancouver for the olympics and have an inside security person tape 'olympics suck' to their back....you know, like we did in elementary school (kick me). THEN have them arrested for speaking negatively about the five ring circus. fat chance? ya , i guess so.

You have been selected by me as a recipient of the 'EAwards' which demonstrates the excellency of your blog. It's meme-like suggestions are that you choose ten blogs you find excellent.

The logo for your side bar can be found at :
http://harpervalley.wordpress.com/2009/10/18/finally-i-figured-it-out/