Why Progressives and Cons are so Different

Ever since I began blogging I've racked my brain trying to figure out why the progressive blogosphere and the Blogging Tories seem to exist in two different worlds.

Why our sites are so decent and nice, while the Con site seems to be written by a bunch of angry old white guys in their underwear...or WORSE. One hairy hand on their keyboards, the other one on their...um...tree branches.

And a few weeks ago I was soooooo excited because I thought I had found the missing link.

But it turns out they're not apes after all. Who knew eh? They just don't share our values.

While liberals tend to focus on questions of individual interaction, conservatives are placing greater emphasis on binding together groups with essential institutions.

He found that those on the left feel strongly about the first two (harm/care fairness/reciprocity) while being relatively indifferent toward the latter three. Conservatives however are drawn more to loyalty, authority and purity.

Which explains so much about those Cons. 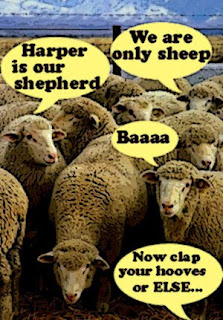 Their racism, their Daddy knows best views, their homophobia, why so many are religious fanatics, why they view all "outsiders" as a threat.

Once again the Harper government is behaving just as an earlier Canadian government did with Jews anxiously seeking asylum from the Holocaust: slamming the door in their desperate faces.

Scary isn't it? It really makes you wonder what kind of totalitarian society.... LOYALTY... AUTHORITY... PURITY....they might impose on Canadians if they ever got a majority.

You know the kind of society the PMO's favourite blogger is hinting at here.

Golly. Isn't that useful? Thanks Stephen.

Now that we know how they think, and what they are planning, it's going to be so much easier to convince most Canadians that a Con majority would be a living NIGHTMARE.

Oh yeah...and one more thing. Since I know it will drive those Con climate change deniers bonkers. And it's Friday night.

Don't you LOVE this video?

A Harper majority is a threat to Canada AND the planet ?

Hmmm....I think we can work with that one eh?

Have a great weekend everyone !
Posted by Simon at 11:29 PM

Hey Simon, Check out my cartoons as to what a Harpercon majority would look like. Good for a chuckle.

Great post, Simon. You articulate my feelings about the future of our nation under the boot of Harper's Reform party to a T.
My only quibble is this line: "..it's going to be so much easier to convince most Canadians that a Con majority would be a living NIGHTMARE."
Don't hold your breath on that one my friend. The citizens who know what's what are divided, the dupes have been convinced and the rest don't care. Conservative majority here we come. Hide your children.

hi CK...yes I did. They're good too. Although I'm not sure I like any more competetition in my home town. First there was Mark ...you know the guy who doesn't have to photoshop because he can draw. And now YOU. If I can't be THE artiste from Montreal...I quit. :)

hi Omar...thanks...I'm glad to see that there are at least two of us who are worried about a Harper majority.
And yes you're right that line was far too optimistic.
I put it in to cheer up our side. Or maybe it's just self delusion.
If so many Canadians can fool themselves into thinking that Harper won't act like an absolute madman if he gets a majority...then maybe I can fool myself into thinking they might come to their senses before it's too late...