Stephen Harper and Our Majority Weapon 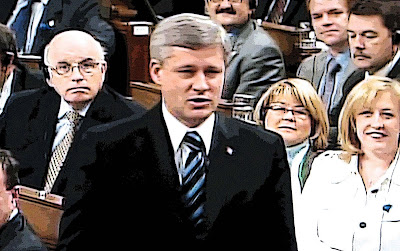 As I watched Stephen Harper confidently swatting away the opposition's questions today, two things hit me like a two by four in the face.

One, Stephen Harper really is behaving like a Liberal...and getting away with it.

The problem confounding the Liberals now is a nemesis who defies definition -- a prime minister standing for everything he opposed, yet facing no policy pressure from the right as he lays claim to a great swath of the mushy ideological middle.

And two, although he is in majority territory, nobody is demanding to know what he would do if he ever got one.

Which is unfortunate, because a Harper majority may be our biggest threat, but that threat is also our most powerful weapon.

Madam Speaker, a long time ago, in fact, as members opposite will know, a great many years ago, when I was a small boy, I read the book Dr. Jekyll and Mr. Hyde, a story by Robert Louis Stevenson. Members will recall that the point of that story was that by simply drinking a glass of a particular potion, what seemed like a perfectly responsible and reputable person would suddenly become some kind of a monster.

But he didn't take it to its logical extension. For example, how could we ever trust a man like that with something like medicare? When he tried to destroy it for fifteen years. And if he gets a majority, and doesn't have to pretend to be a Liberal, he could strangle it like a chicken.

The opposition seems to be stuck in the present and the past, when they should be playing to doubts about Harper's character...or mental stability. And asking what will he do in the FUTURE. When the mask comes off?

Which is why I like the simple question in this editorial.

Which is the real Stephen Harper?

And of course why I made this video....

To help remind people that whatever mask he is wearing today Stephen Harper is NOT a nice guy eh? And that a Con majority could be the worst thing that ever happened to Canada.

Which is why the opposition should include the word majority in just about every question. Because if you plant enough seeds of doubt in the population, people will start asking themselves can we REALLY trust Stephen Harper?

Cheer up brothers and sisters. From every bad thing comes a good one. If we play our cards right.

Sooo discouraging. Stevie's numbers go up for making an ass of himself on stage...Iggy's numbers go sharply downward following din din in Quebec City...
I was on comment boards today on various news pages. I'm wondering if Canadians are just becoming more Libertarian.
I provided references & quotes as well as reminded them of his video behind closed doors in Sault Ste Marie on those comment boards & got the stupid thumbs down on everything & was even accused of fear mongering.
I also find it incredibly odd & Hypocritical of those same posters who accuse Iggy of being in U.S. for too long (ok, true enough) but they ignore the fact that Stevie was Georgie's little pet. I provided proof about how Stevie thinks Bush's Conservative movement was an inspiration to Canada & a bunch of other stuff to prove who's pro-American now?? But got shot down. Like those American tea-baggers; those clowns wanted nothing to do with facts but just wanted to push their own propoganda.
I'm not an Iggy fan, but he's all we got to counter Stevie at the moment. I still see him as the lesser of the 2 evils.
Simon, if you have any ideas about any of this; I'm all ears, because I am getting more & more discouraged (shaking my head).
Like yourself, I would love to see a NDP & Liberal merge.

CK makes an interesting point and
that is that we may be coming more libertarian.

This is what Tom Flanagan calls incrementalism and it's been at work for the last 3-something years. Moreover, it seems to be working. Incrementalism is best exemplified by the story of the camel and the tent.

All the more reason to work harder to bring this gang down--and quickly!

Hi CK... oh boy is it discouraging. I don't know what's going on. Part of the problem is Ignatieff. He's taken the Liberals into the centre-right zone and Harper has moved in to the same zone and it's hard to distinguish the two parties. Also Ignatieff comes across as a bit creepy and not very warm. But then there's the other horrible possibility, that people believe Harpie has really changed his stripes. And I read a very interesting analysis in La Presse that suggested that because the NDP is supporting him it makes him seem a safe choice.
As you and I know it's a terrible mistake, because as soon as he gets a majority he will act like a real tyrant and cut government and the CBC and medicare down to the bone.
A lot of TLC from Sebastien...and my dog...is the only thing that keeps me going... :)

hi Torontonian...I'm not sure about the libertarian stuff. I think there are a lot of factors responsible for this.
One important one is demographics. Canada had a HUGE baby boom...the biggest relatively speaking after Australia. And as people age they tend to be more conservative.
We need to reach these people some way, but the other thing that strikes me is that it's similar to the situation in Britain.
If Scotland ever seceded England would be a right-wing country. And if Quebec did so would Canada. OK now I'm so depressed I gotta go lie down... :)