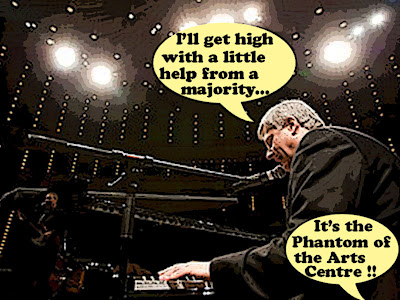 Oh.My.God. Imagine going out for a fancy shmancy evening at the National Arts Centre, expecting to see some high-class acts.

And without warning have your eyes, your ears ...your very soul....assaulted by this cheap cabaret act.

Golly. I don't know about you. But I'd want my money back. Because that has to be the worst cover of a Beatles song EVAH. So bad it hurt my ears, and made my dog howl with excitement...no doubt believing it was the bitch next door calling him to come and play. Woof. Woof.

And can you believe the hypocrisy?

Just as he's planning to jail millions of young Canadians for smoking marijuana.

And can you believe him croaking away at the Gala...pretending to be an ordinary guy. After trashing it last year:

"I think when ordinary working people come home, turn on the TV and see … a bunch of people … at a rich gala, all subsidized by taxpayers, claiming their subsidies aren't high enough when they know those subsidies have actually gone up, I'm not sure that's something that resonates with ordinary people..."

And not even letting his poor wife escort John Baird to the ball. Even though she was the honorary chair.

Lordy. I still can't believe someone could be so cruel. That Johnzilla story is sadder than Cinderella.The Phantom of the Opera was scary eh? But this one's a MANIAC!!!!

Who'll do ANYTHING for a majority.

Oh well... a few thoughts come to mind as the full horror of this cheap cabaret act sinks in. An election can't be far off. I wish Ringo hadn't changed the lyrics:

Starr insisted on changing the first line which originally was "What would you do if I sang out of tune? Would you stand up and throw tomatoes at me?" He changed the lyric so that fans would not throw tomatoes at him should he perform it live.

And who the fuck gave Great Croaker Leader the idea that he could sing that song?

When it's not a even a Con song and that ridiculous nerd should stick to Perry Como.

Because that song belongs to US !!!

Especially when Joe sings it...

Now THAT is how it's done.

You know ...after listening to that song...it strikes me that with a little help from our friends...and a little unity on the progressive side.

We could send those crass Cons back to Alberta. Build a kinder,gentler,better country.

Yikes! Is that version actually out on youtube? Forgive me! Morbid curiosity is a poor character trait of mine.

You know, Simon, there is nothing to stop you or a musician friend to remake the song with the 'tomato' lyrics... Put it up on Youtube & then photoshop ol' Stevie at the piano with splotched tomatoes at him!

Hi CK...after you asked that question I went and checked and sure enough it is...and it's GHASTLY.
I was worried it might help give him a majority, but now I'm thinking it could cost him his job...
As for your idea of remaking the song...don't give me any more wicked ideas I've got enough of them... :)

Oh, that Joe Cocker version is the BEST!!! Thanks so much Simon, I had forgotten about it,after getting so
hopeful about a Coalition Accord which reminded me of the sixties ideals and then falling into despair with the world's political shenanigans this year.
They should have gone the whole hog and put Steve in a Sgt. Pepper's suit. Which colour I'm not sure since Messieur Ignatieff has been seen appearing in a bright light blue one.
Its nice that our PM can play some piano but he won't make Canadian Idol.Well, there isn't one this year, anyhow.Finances.
After this performance, will the polls go up for the Cons?
I now know what the belly paunch is from. Its NOT a beer belly. Its a Horton's jelly donut protrusion.

Och, that gave me a laugh.

Well, Simon, you never know -- maybe the experience will have a humanizing effect on the guy.

I agree that Cocker's version is the classic -- that is how it's done. Have you seen, though, the cover done by Danyl Johnson, a current contestant in the British X Factor? He's more or less doing Cocker, but he's very good.

"You know ...after listening to that song...it strikes me that with a little help from our friends...and a little unity on the progressive side.

We could send those crass Cons back to Alberta."

Errrmmmmm..... you ARE aware that li'l Steevie Harper is from ONTARIO, no?

You missed out the standing ovation from the audience. Guess people who paid to go there didn't feel too ripped off!

It is a great relief to find someone else so greatly troubled by that performance.

Thank you for the clip of Joe.

Simon, I caught the video: it's posted to my blog, if you're interested: http://sistersagesmusings.blogspot.com/2009/10/stevies-debut.html

Obviously, he was lip-syncing. Hell, I'm not sure he is even playing the piano for real. I did hear some scratchy back-up vocals, though that was sort of reminiscant of a cat scratching a blackboard.

Hi Oemissions...I'm glad you liked the Joe Cocker song. I know the movie Woodstock by heart, and I love just about all the songs, but I think that one is my favourite.
As for Stephen Harper's performance, I'll give him credit for nerve, but I thought it politicized the Gala and that was absolutely disgraceful.I know a few straving artists in this country who deserve to be up there. But instead we got Harper...how horrible...

Hi skdadl...well I'm not sure it's possible to humanize Harper. But I sure LOVE Danyl Johnson !!! Wow how did I miss him? He's not only a good singer he's really cute. I favourited him immediately... :)

Hi 'berto ...yes I have heard the rumour he's from Ontario. But he adopted Alberta a long time ago so I'm certainly not going to let any small details get in the way of a good story.
Besides have YOU seen his birth certificate?
AH HA. So how can you be so sure? ;)

hi Geordie Tom...yes I did note that the rich people who can afford to attend that Gala did give him a standing ovation...or rattle their pearls.
But then they would eh? :)

Hi jessisays...what really troubled me about that performance was the way Harper turned the Gala into a campaign event.
It's supposed to showcase our artists...who definitely need all the showcasing they can get.
So I just wish they'd given a real artist a chance to perform instead of that buffoon...

hi CK... You think he was lip synching...even though it was THAT bad? Somebody is going to get fired for that. Although I like the idea of a mechanical piano even BETTER... :)

BTW for some reason I didn't realize you had a blog. But I'll be adding it to my blog roll immediately...