The Cons and the Swine Flu Threat

Because the Swine Flu is back in the news again, I decided to ask just about everyone I bumped into today, what they knew about the H1N1 bug.

And most of them admitted they were totally confused...and almost all of them were afraid of getting the vaccine. Despite the latest ominous signs.

A “striking” proportion of severe swine flu infections are occurring among young women, according to Canadian research that shows severe H1N1 can hit previously healthy teens and young adults hard and fast in a pattern previously only ever seen with 1918 Spanish flu.

And I couldn't help think how much better prepared we might have been if the Cons had spent more money on informing the public about the Swine flu. Instead of spending gazillions selling their disgusting Con Patronage Action Plan. 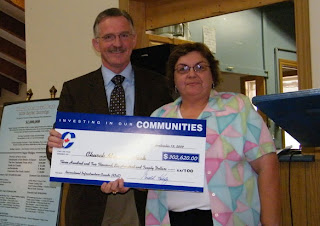 And whether things would have been different if old white men were particularly vulnerable, instead of women, young people and aboriginals.

But then what can we expect from this gang of political thugs? Who are prepared to put partisan politics before the lives of Canadians.

And will do ANYTHING for a majority. Like keep up the link to the Con Patronage Action Plan ....on the Health Canada web site. 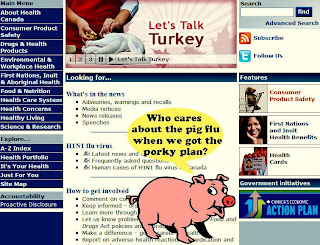 As if their porky vote buying plan was more important than our health.

And then as if all of this wasn't bad enough ....Great Porker Leader only adds to the general confusion.

Prime Minister Stephen Harper may have added to the confusion about the H1N1 vaccine on Wednesday by appearing to hedge on whether he would get immunized against the swine flu virus.

OMG. I always knew these ignorant Con fanatics would kill our country... now I'm worried they could kill us first.

On the other hand I also knew that if we waited a while, instead of rushing into an election, the Cons would screw themselves.

But who knew it would be so beautiful? 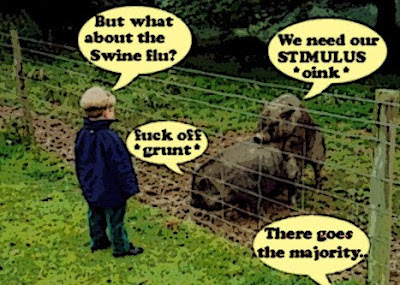 Hmmm....remind me to get some porky shots for my next fabulous video...Stephen Harper and the Pig People.

Golly. I think we finally got the break we needed eh? Oink. Oink.

simon, so good to read that you see it as it is....we know steve likes women barefoot and in the kitchen, and first nations dead. as for youth....i'm betting for sure that the most youth whom get hit are from poor families.

interesting that our elected are using their own countrymen in something that is not far off the original germ warfare.

now, where's that blanket and where's the small pox?

The swine flu "pandemia" is almost a great deal for people like Rumsfeld (owner of Tamiflu rights). I have compiled some vídeos about that questions, some in Spanish, where they explain that it is only making money for some big companies and that the vacine for that is very dangerous for health, contamined with some aninmal cancer cells and importante side effect risk.
Especially detailed is the last video where is speaking a Spanish non and doctor, really impressive.

hi scout...I can't believe that with the swine flu descending upon us so many people are so confused. In European countries governments have been doing a much better job of getting the public health message out.
But the Cons have shown what their twisted priorities are by putting SIX times as much money into their Porky Action Plan ads as they have spent on ads about the Swine Flu.
As for the situation of native people, the way the Cons have been acting in the face of this public health emergency, I'm hoping for the best but fearing the worst...

hi Atreides...I agree the flu pandemic is good news for the big drug companies. And I know how some people don't trust vaccines.
Because Europeans and Canadians share the same kind of vaccine...unlike the American one which is a LIVE one...the debate comes down to the question of adjuvants. They are added to make the immune system react more strongly to the virus in the vaccine.
But people confuse the problem of contamination, that caused serious reactions in 1976, with adjuvants that have been used for years, and are harmless for most people.
One of these days I'm going to post some scientific studies, and let people make up their own minds.
Or argue about it... :)

Last news I got is that in Germany (reported by a German TV channel) soldiers get a vaccine with special adjuvants toe get a faster resulta than "normal" citizens. It's a bit strange that governments manage different types of vaccines and do not give transparent information about all that matter.

hi Atreides...yes we really should have one consistent standard vaccine. There is a lot of confusion in the air, I'm going to to do my best to clear it up. But right now thanks to the appalling lack of information, and contradictory advice, I'm a bit confused myself... :)