The National Equality March and Boyzone 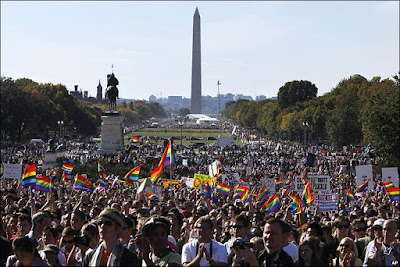 When I saw this picture of the National Equality March in Washington today, at first I was moved.

But then I saw this raw video and it made me feel proud, but also angry...

Because I simply can't understand why gay Americans are still being forced to fight for their most basic human rights forty years after Stonewall. Still chanting the same slogans in the so-called land of the free, that others shouted out before them. How slow the march of justice is when it comes to gay people.

But then this cheered me up.

Unlike previous marches promoting gay civil rights, the rally was primarily the undertaking of a new generation of gay, lesbian, bisexual and transgender advocates who have grown disillusioned with the movement’s established leadership.

Because those gay suits in Washington really need a kick in the ass...and so does Obama. The new generation has arrived to take up its place on the front lines of our struggle. It's impatient.

And we are beautiful.

There were black LGBT people and Latino LGBT people. Numerous communities of faith with large and vocal groups of marchers. Former and current military service members. Self-proclaimed socialists. A sprinkling of the leather community. A few fabulous drag queens. Young people. Old people. Singles and couples. Countless LGBT parents with babes in arms or young ones in strollers. A major showing of straight allies, young adults and college students. The list could go on.

Golly. What an amazing family to belong to eh? And what great straight friends we have. You know if I hadn't turned out this way I think I would have sued my parents.

Of course it's not always great to be gay. Not only are crazy people always trying to put us down...or kill us. Not only are we seemingly condemned to fight FOREVER. Even though we rather just live our lives like everybody else.

But today we had a death in the family.

He may not have been the greatest singer, and it's definitely not my kind of music. But by coming out publicly Stephen Gately sent out a positive message to gay kids everywhere. In a sane world it would have been nothing. In a world rotten with homophobia it was HUGE.

So tonight the gay boys in this house are wearing a gay pride flag on one arm, and a black arm band on the other...

Oh well. Some things are for sure eh?

The music goes on.So does life.And if you're gay.

So does the struggle... 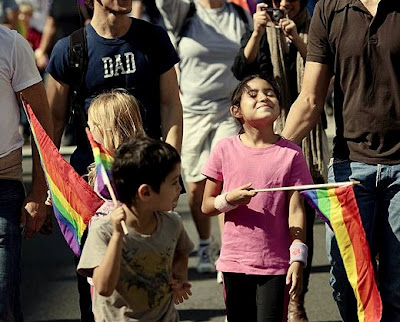 Boyzone star Stephen Gately 'had been drinking heavily before death'

Quote: "Stephen Gately, the gay Boyzone singer who was found dead this weekend, had been drinking heavily on the night he died. It is thought he may have choked on his own vomit."

quote: "... He died a natural death of acute pulmonary edema' which had nothing to do with any consumption of alcohol or drugs, the spokeswoman in the Majorcan capital of Palma, said. A pulmonary edema can be due to either the failure of the heart to remove fluid from the lungs or direct damage to the lung tissue...."

"Tabloids have been reporting that Gately choked on his own vomit after a night of binge drinking, but those reports don't appear to corroborate with the autopsy."

hi 'berto...thanks for keeping me up to date with the autopsy results...I suppose somebody had to do it ;)
I didn't mention it myself because it doesn't matter how he died. Or maybe it's just because I'm all too familiar with binge drinkers. In the place in Scotland where I lived they rotinely pump out the stomachs of alcohol-poisoned 12-year-olds.
It's why I don't drink myself.
As for Stephen Gately... some are born great, and some have a little greatness thrust upon them.
Being forced out of the closet did make him a hero for some gay kids. And in a tragically short life that is SOMETHING...