When Can't You Call A Nazi a Nazi? 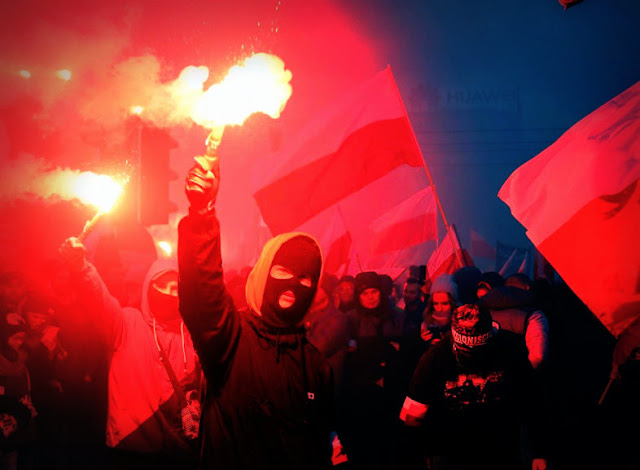 Far right wing extremists may be crawling out of the woodwork all over world including Canada.

They may be racist, anti-semitic, anti-gay, and in many cases ultra violent, but please don't call them Nazis.

They'd rather be called white nationalists, or identitarians, or yellow vested patriots or whatevers.

Which has some progressives wondering when can you call a Nazi a Nazi?

The video was produced by the German comedy group Bohemian Browser Ballett.

But while it may be funny, the situation in Germany couldn't be more ominous.

Germany’s government commissioner on antisemitism has suggested Jews should not always wear the traditional kippah cap in public, in the wake of a spike in anti-Jewish attacks.

And somewhere in all of this there is a lesson for all of us.

And all decent people need to unite to destroy them before it's too late...
Posted by Simon at 1:05 PM

Uncomfortable truth coming up... The people committing anti Semetic crimes in Germany are not named Hans.

Did you read the article, Dmitri? The German authorities themselves said it's Nazis that are primarily to blame. So much so that they even have their own party in the Bundestag, the AfD. And who's stoking the flames? The Internet and social media. The worst thing America has inflicted upon humanity since the nuclear bomb!

Funny that, over 90% of hate crimes in Germany are committed by Nazi’s, including the anti-semetic ones.

Why would the Good Germany Anonamous Hans want to lie about that?

Get a grip Jackie. I seriously doubt the internet is just as bad as 'nationalism.' The problem is people not being able to critically think about what is posted.