Andrew Scheer and the Abortion Question 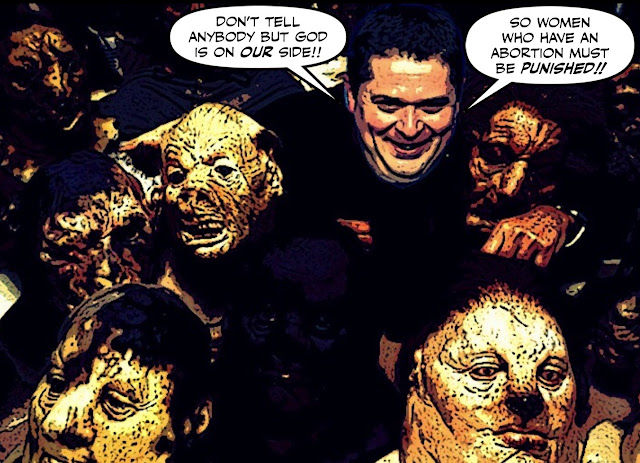 Andrew Scheer has always tried to avoid saying anything that might reveal how he really feels about the abortion question, and the rights of women. And with good reason.

For if Canadians knew how much of a hardline social conservative he is most of them would be appalled.

But it's getting harder for Scheer to avoid talking about abortion, now that some of his fellow SoCons in the U.S. are on a holy fascist rampage.

And since so many of his MPs recently attended an anti-abortion rally on Parliament Hill, Scheer is now clearly on the defensive.

But sadly for Scheer he's a serial liar, so it's hard to believe anything he says.

And as for those who claim it couldn't happen here, as Ann Kingston points out, Alabama is closer than we think.

Canadians who reassure themselves that this couldn’t possibly ever happen here haven’t been paying attention.

The polls may favour choice, but they also do in some states where abortion rights are being smothered. And in Canada the SoCons are helping to elect one Con provincial government after the other.

Demanding a stiff price for their support..

Jeff Gunnarson, vice-president of the Campaign for Life Coalition, a national group that works to nominate and elect candidates who oppose abortion to all levels of government, told me his group threw its support to Doug Ford after the politician reassured them he supported all of their demands: to defund abortion; to require parental consent before a minor receives an abortion; to uphold “conscience rights” that allow medical professionals not to refer a patient needing abortion or assisted suicide; and to scrap the sex-ed curriculum of Kathleen Wynne’s government.

While American groups fund and and train them.

Canada’s RightNow, for example, has received support and training from the Leadership Institute, a right-wing U.S. training organization funded by groups afﬁliated with the Koch Brothers donor network.

And of course, a picture is worth a thousand words... 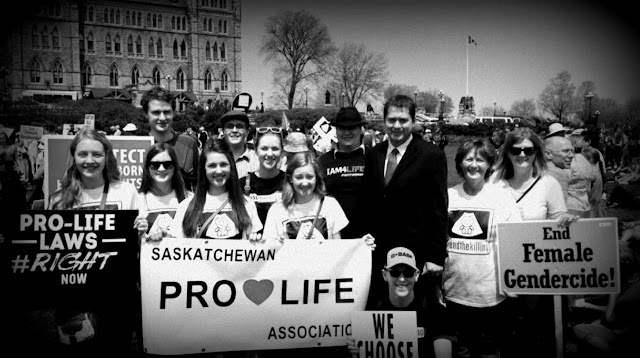 Scheer is quietly obsessed with trying to recruit young people to the anti-abortion movement.

If he wins the election he is threatening to cut funding to universities who don't let his young fanatics roam all over their campuses, accosting students, and putting up grotesque posters like these... 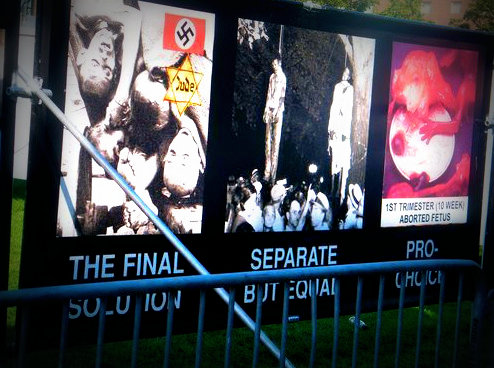 And while Justin Trudeau has made it clear where he stands on the abortion issue, and what is happening in places like Alabama... 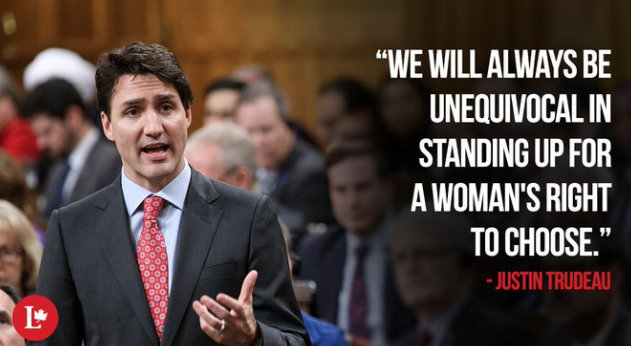 But then of course what could he say?

When his past keeps coming back to haunt him... 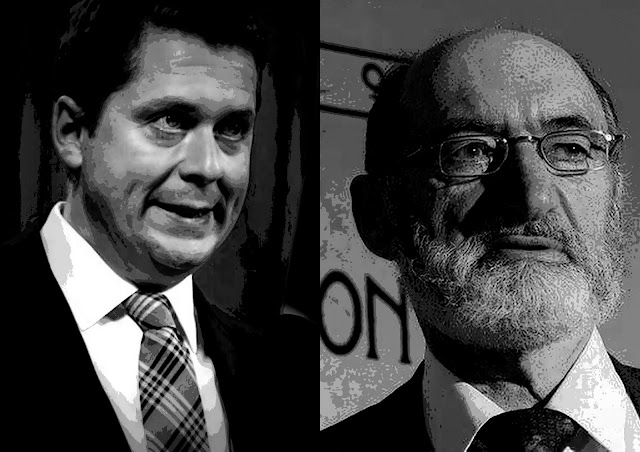 Like the time when Dr Henry Morgentaler received the Order of Canada, and Scheer went ballistic.

"I can't believe that this was done on Canada Day, a day we should be coming together," Regina MP Andrew Scheer told CTV.ca on Tuesday afternoon. "I think this actually debased the Order of Canada."

Scheer, a Tory who describes himself as "pro-life," said he's planning to call members of the advisory panel that suggested the appointment and ask, "Why did you do this?"

He could not restrain himself, and revealed his true feelings. 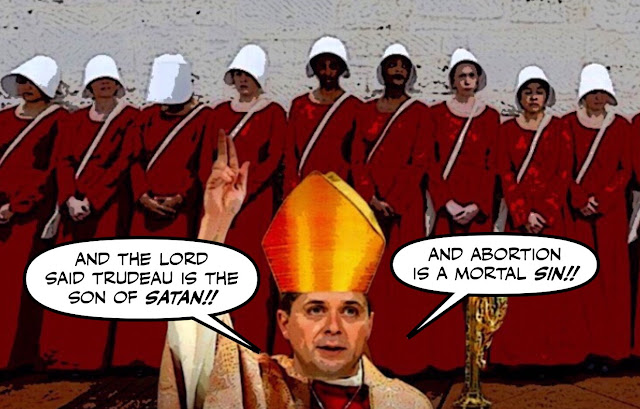 And of course made it only too clear why he can NEVER be trusted.

We don't need need an American-style religious fanatic, telling women what to do with their own bodies, or waging war on LGBT Canadians.

The war on women in the U.S. can only get worse before it gets better.

And it must never be allowed to happen here... 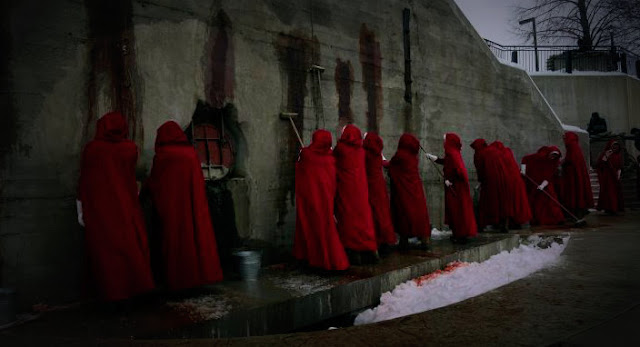 Simon, please share this video with your followers. It's the interview with Michael Coren on Wendy Mesley's program where the subject of discussion is the takeover of the CPC by the Christianist right. Coren is genuinely concerned about not only Scheer, Ford etc. and their extremist stances but about what he calls the "visceral hatred" of Justin Trudeau "that goes beyond politics." As Gandhi said "I like your Christ but I don't like your 'Christians'." He would be right. Your Christians today are the ones who'd be responsible for the crucifixion. Or the stoning of the "loose woman."

See, this is why the Cons and their propaganda mouthpieces went nuclear with the bad-faith bullshit over she who must not be mentioned, and the projection accusation "Trudeau is a fake feminist." Like I said, it's the 2016 template. Besides attacking the star liberal candidate with a firehose of bullshit over "emails," don't forget how the GOP tagged Hillary as a "fake feminist" because of her husband's peccadillos, while shrugging off Trump's disgusting behavior and Pence's religious fanaticism. That's all they are, GOP North. Goebbels' Own Party.

I hope you'll write an article about Trudeau's NYT interview. I found it oddly comforting, because it shows him to be standing firm that 1) he did nothing wrong; 2) the media is who's responsible for making it into "overblown noise" instead of focusing on issues that matter, and 3) he's not "off his game" at all, but has a steely resolve more than ever to fight for what he believes in.

They're the ones who made it a battle of the sexes because that plays better for ratings. He just says "someone who is so openly antagonistic" which clearly can apply to anyone of any checkbox configuration. He treated her as an equal when she thought she was special. And with her petulant tantrum, gave mileage to Scheer and threw millions of other women under the bus. That's feminism? No, that's selfishness, a Judas selling out not for 30 pieces of silver but 15 minutes of fame. There's no shortage of Aunt Lydias who are guilty of that!

As an American, I'm warning you folks not to repeat our mistake. Canada's supposed to be the place where the handmaids escape to in Atwood's novel. Not Gilead North itself.

OT but I can't figure this out.

Mark Norman and his family had a whine_in with a journalist where they complained about a year of spending extravagant money on his lawyer. He knew he was a reformatory bagman and that the Davies deal was political. He chose to ignore the chain of command and go around Vance. Perhaps he was angling to replace Vance after the election on his hay to a double dip in the lobbying pool.

Why if he was so concerned about his family and finances, didn't he tell his lawyer the truth ? He knew he was a reformatory bagman, that it was all political and had the names of Potato Peter, the old Tool and the absolute monarch of Alberta on the tip of his tongue.

The idea that his lawyer knew and was suppressing evidence for political and strategic reasons is too ridiculous to contemplate.

They are the compulsory pregnancy party. Its a message which needs to be re enforced. Scheer says he won't re open the "abortion" debate, but you can bet his M.P.s do. As you pointed out some of his M.P.s have participated in anti choice demonstrations. Its important to ensure all voters know this.

what is happening in the U.S.A. can happen in Canada. Yes, he'd most likely be out of office next election, but for the years he is in office, it would be death and destruction. Not many remember the time when abortion in Canada was illegal. Women died. Back street abortion can kill. Women died.

Having an abortion is a human right. Its a woman's right, its a right to choose how you live your life.

The American abortion debate isn't so much about abortion, in my opinion, but about the need to control women, to criminalize them, to have them live in fear. Women with money will always be able to obtain an abortion. You can go to Europe which was done in the U.S.A. back in the day. You can go to Japan. Women with no money can't travel, so they are under the thumb of those in power. Its a way of forcing women to have tubal ligations and thus ensuring they don't have children.

There are movements afoot in the U.S.A. to amend their constitution to provide for "fetal rights". The question then becomes whose rights take priority. We have already seen cases in the U.S.A. where a fetus's rights superceded that of the woman's. Once we go down that road, it will be the end of rights for women.

It is best all of us who believe in choice make others aware there are anti women's rights people in the Conservative caucus and they could be coming to a riding near you. If you want your rights taken away vote conservative. If you don't want the Conservatives in office, there is nothing to prevent a group getting together and taking out an ad in your local news papers, small chains are inexpensive, and simply post a picture of the Conservative M.P:.s at the anti abortion rally. You can write letters to the editor. You need to be active or we may find ourselves back in the 1950s, with no equal pay, etc.

Way back in time to the 70's, a woman asked me about abortion. I told her I couldn't have an opinion because I wasn't a pregnant woman. She said I was the only person she knew who answered correctly. I still feel the same way and have contempt for the silly nonsense from Sheer and his evil anti women idiots.

Abortion isn't really a left vs right question, it is more a dictatorship vs democracy question.

In Romania, under the communist dictator Ceaucescu, they noticed people protested by not having kids. So they restricted contraception to condoms that leak, and outlawed abortion in 1966. At all work places, women of child bearing age were periodically given forced gynecological examinations by the police state doctors. Anyone determined to be pregnant would be tracked and if they failed to deliver, there would be police inquiries as to why.

So why did Andrew Scheer wet himself with glee when pro life champion Ceaucescu was executed?

My arm has no legal protection according to these ghouls, even though it is alive and they have no problem with that. Like a fetus, my arm is protected by the same laws that protect its owner. You can't take my arm without my permission, nor can you take my fetus without my permission. And that's the whole point. We are conceived in a kind of slavery because we are owned by and part of our mothers. Then we are born free. Like the homophobes like to sneer "It's Adam and Eve, not Adam and Steve", we can say "You're born free, not conceived free".

Why do we use this fake science about "heart beats". Traditionally, whether you or parts of you were moving was irrelevant, bodies can and do sit up in mortuaries due to rigor mortis. Traditionally you were considered alive if you were *breathing*. Fetuses do not breathe. They are not individuals until birth.

Rumley, that also applies to the governor of Alabama. Kay Ivey is 74 years old. I don't know or care if that evil slime gave birth when she was of reproductive age, but now it is absolutely none of her business (by the way, while I'm considerably younger than her, I'm also past that).

The issue will sink both Trump and Scheer. there are several generations of women who have always thought they had the right to chose. the thought of that taken away, ought to drive most of them to the voting booth.